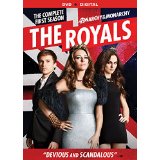 So do depravity and nobility go hand in hand? Well, that is how it seems to be in the Royals, the EW channel’s faux depiction of the English ruling family. The show does not gain any points for characters, as many of them are cliché archetypes: the unsure heir to the throne, the drug-addicted socialite daughter, the self-absorbed and media-obsessed mother, the depraved and jealous brother of the king, and the noble albeit naïve king. As I say none of these character types are new; but their depiction in this series did manage to pique my interest as well as push the boundaries of what is permitted on network cable. (Let’s face it, eventually all those censors will be done away with completely.) The Royals is a series that will probably have you wondering: is this really how the class really behaves?

The series begins on a somber note as the family is just informed that the eldest son and heir to the throne has died in a mysterious military accident. As expected, this revelation brings about the immediate realization that the second-born son, Liam, is now the heir apparent to the British monarchy. Liam, who never expected to succeed to the throne, now finds his world turned upside down as he must now step up and become the embodiment of what is expected for a king. It is also worth mentioning that the news of his ascension comes the night after engaging in drunken one-night stand with the daughter of the head of his father’s security detail. See, drama already, as not only is Liam’s life changed, but also the life of Ophelia, who found herself drawn to Liam but is unsure now how to fit into his new world. Let’s take a brief pause; this is not new either, so in terms of breaking new ground, there is not a whole lot of that happening in this series. That said, like it all things, it is more about the journey, and it is worth noting that this relationship is one of the biggest influences of the show as well as the purest relationship of the series. Trust me, that will become abundantly clear after you get a load of the other relationships.

Moving on, as the family deals with the loss of the eldest son, King Simon announces to the family his intention to put into motion plans to abolish the monarchy, thereby destroying the family’s way of life. As to be expected, this announcement does not go over well, especially with his wife Queen Helena (Elizabeth Hurley), who makes it very clear that she will not stand idly by and allow her husband to threaten their way of life. Amongst the family, the idea of losing their power is met with different responses, such as with Princess Eleanor, who does not seem to care, focusing more on her hedonistic lifestyle, which eventually lands her in hot water of her own. The king’s brother Cyrus, who clearly is against his the idea of abolishing the monarchy, decided to set in motion more clandestine efforts to disrupt his brother’s plans, that is when isn’t forcing the hired help to engage in sexual or questionable acts.

In the final episodes of the season, it is discovered that there is a deeper conspiracy tied in to death of the firstborn and beloved son. A storyline obviously meant to set up the show up for a second season (a ploy that apparently worked, as the series is due to return in November). The introduction of this storyline felt forced; perhaps some foreshadowing towards the beginning of the series would have made the conspiracy seem more fluid. Not too much; maybe a brief mention suggesting things were not as they appeared towards the end of the first episode would have gone a long way.

In the originality department, the show doesn’t get any points with me, as I saw what appeared to be a lot of old ideas sort of rehashed and reformatted, but I will confess to being mildly entertained by the story. Or least enough to warrant a closer look in which I discovered that the series creator made another teenage heartthrob show that took the world by storm a few years ago (not going to say which one, just going to have to find out for yourself). This discovery made sense of certain themes as I begin to seem the similar styles between the two projects such as two characters whose worlds have orbited each other for years suddenly thrust together by events. I will say that I preferred how things unfolded in The Royals, much more expedited with the delivery than in the past.

As far as character arcs, the final two episodes have the most character development in my opinion. As every character is forced to confront things that they have ignored for most of the series. Also the last two episodes bring about the most change as everyone finds themselves in a different position than they were in at the beginning, some for better but worse for most. Needless to say, there will be much to see in November.

Jeremy Butler is a film school graduate of the International Academy of Design and Technology. He is been writing for Upcomingdiscs since 2012; however, movies have played a big part of his life for much longer. Favorite genres include horror, science fiction/fantasy, and comedy. Favorite movies are V for Vendetta, Boondocks Saints, Kiss Kiss Bang Bang, and The Godfather.
Little Loopers Grey’s Anatomy: Season 11