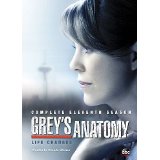 So begins life at Grey-Slone Memorial Hospital without Dr. Wang, and for the show Grey’s Anatomy, the loss of Sandra Oh. But there won’t be time to dwell on that loss as the story shifts to the departure of another of the show’s most popular characters and actors. Patrick Dempsey spent more than a decade as the show’s McDreamy, one of the more compelling talents in the cast. It’s another season, and mixed amid the medical emergencies, struggling relationships, and tragic events, it’s time to say goodbye once again.

Grey’s Anatomy has continued to surprise fans and critics alike. As far back as the seventh season there was strong talk that the show was drawing to an inevitable close. Since that time we have seen the end of the spinoff series Private Practice, which I always considered to be a better show. Nothing’s changed; as the show entered its 10th year there was the same talk both from outside and from within that the series was ending. Not only did it not end, but the show took some serious strides in ratings and storytelling. Now, going into the 11th season there is less talk of the show ending. The huge talk involves Patrick Dempsey leaving the series, but cast changes have been going on every year for this series. Last year it was Sandra Oh. Huge regulars have left or even been forced out. Over the years we saw huge names like Isaiah Washington, Kate Walsh, Katherine Heigl, T.R. Knight, Eric Dane and Chyler Leigh. Is Grey’s going away? I’m not completely sure. What I am sure of is that fans should not miss the 11th season on DVD.

If you want some history of the show, we’ve reviewed most of the eight seasons that have come before now. You can catch them here: Previous seasons. But this is not the kind of a show you can just start with on the 11th season and get much out of. If you’re not familiar with the cast and crew, start from season one and work your way up. This review just isn’t for you. Fans wanting to continue the ride…read on.

The season begins with the aftermath of Wang’s departure. Owen Hunt (McKidd) is dealing with the personal loss, while the board must seat a replacement. That’s not going to be easy. Wang left her hospital shares with Alex (Chambers), but the board prefers Bailey (Wilson). I’m not quite sure how you refuse to seat an actual hospital owner, but there you go, and we’re off and running.

With every loss there comes something new. Dr. Maggie Pierce (McCreary) is the new heart surgeon superstar at the hospital, but she brings far more than her skills. You see, on this show you have to bring the relationship drama, and does she ever. It turns out she’s Meredith’s sister and Weber’s daughter. Let’s just say these relationships will take a few episodes to work themselves out. This situation leads to some flashbacks of a younger Ellis Grey. Previously we’ve seen the version played by Kate Burton, and we do again this season. Now we go younger and see the youthful relationship with Weber, played by Angel’s J. August Richards, and the younger Ellis is played by Sally Pressman.

Hunt and Callie (Ramirez) team up to use her research to help veterans who have lost limbs. If you’re looking for an inflation index, here it is. Back in the 1970’s it cost $6 million to build a bionic man with superpowers. Apparently today it will set you back more than that for just one robotic leg and no superpowers. This is one of the better story arcs, and it should have gotten more attention throughout the season. Instead we spend more time on the now-broken relationship between Callie and Arizona (Capshaw). I don’t know about most fans, but I’m hoping that’s finally over and out.

Fans of the departed Private Practice will enjoy seeing Derek’s sister Amelia cross over from that series to this one. With Derek on and off about joining the President’s team, Amelia takes over as chief of neurosurgery. It makes for some nice clashes between sister and brother and a bit of a moral crossroads for Derek, who finds himself hesitating in his loyalty when her drug addiction and its tragic results surface. I wish we had seen more of this from that character before now.

There are plenty of tragic situations. One of the more moving involves a defect in April’s baby and brings about some serious changes to that character. I have to say that actress Sarah Drew was a standout this season and gets my vote for the MVP of the season. She’s gone from normal to crushed to incredibly strong and assertive as the season progresses. Drew manages each of these changes quite well.

The standout guest star this season is Geena Davis, who plays Dr. Nicole Herman. She’s one of only a handful of surgeons who operate on fetuses while still unborn. She’s trying to share her knowledge with Arizona before she dies of a brain tumor. It’s supposed to be inoperable, but don’t count out Amelia, who takes on the challenge. That should have elevated that performance. Unfortunately, it was written with far too many monologues that took away from what the actress might have been able to do with the part. Someone got a little carried away, and these segments are terribly overwritten.

There’s no shortage of the strange medical cases. A guy comes in with a tree sticking out of his stomach. April has a patient trapped in a crushed car. If they try to get him out, he’ll bleed to death before they can get to the hospital. She comes up with a rather clever solution. Another patient has his junk cut off…twice. A woman has a worm living in her nose. Finally, one patient has an ear growing out of his arm.

Of course, the big story arc has to do with Meredith and Derek. They’re having serious relationship issues over the DC job that leads to a bit of back and forth. Unfortunately, it also leads to a season with far too many flashbacks that are really clips we’ve already seen. It makes these episodes feel quite padded, and it doesn’t help that they are repeated over and over again. This is a case where binge-watching really brings out a flaw, because you see the same scenes over and over again in just a few days. Additionally it shows a lack of confidence from the writers in Ellen Pompeo’s acting skills. They don’t seem to trust her to convey these feelings; instead they feel they need so much repeat of her “thoughts” to beat us over the head with the idea.

There are also more than a few big emergency events. They spend far too long on Herman’s brain tumor and then totally dismiss the character. It’s a rather sudden change of lanes. There’s a plane crash that will bring back bad memories for the staff who were on the plane that cost Arizona her legs and Meredith a previous sister. An earthquake hits, and later a bridge tunnel collapses. The film ends with the wedding of Weber to Avery. I include that in the tragic section, because I really can’t stand the Avery character. I don’t know if it’s how Debbie Allen plays her or just how she’s written, but she is the most unlikable character I’ve seen on television.

The series takes a bit of a time leap after Derek’s departure. Meredith goes AWOL for a year, and a two-part episode takes us through an entire year, stopping at each of the year’s holidays to check in with the characters. It’s too early to say how that might play out in the structure of the show. It was a pretty cool episode, and it didn’t feature much of Meredith. I know the show is named after her, but she’s one of the weakest characters on the series, in my humble opinion.

You get all 24 episodes, deleted scenes, and a gag reel. There’s a profile piece on Catherine Scorsone, who plays Amelia. Of course, there’s a short farewell to Derek and Dempsey. Fans say they want another 11 years, but the standout characters are leaving each year. Maybe there won’t be a huge loss next year. “I wouldn’t get your hopes up.”

Gino Sassani is a member of the Southeastern Film Critic's Association (SEFCA). He is a film and television critic based in Tampa, Florida. He's also the Senior Editor here at Upcomingdiscs. Gino started reviewing films in the early 1990's as a segment of his local television show Focus. He's an award-winning recording artist for Omega Records. Gino is currently working on his 8th album Merchants & Mercenaries. Gino took over Upcomingdiscs Dec 1, 2008. He works out of a home theater he calls The Reel World. Favorite films: The Godfather, The Godfather Part II, The Body Snatcher (Val Lewton film with Karloff and Lugosi, not the pod people film), Unforgiven, Gladiator, The Lion King, Jaws, Son Of Frankenstein, The Good, The Bad And The Ugly, and Monsters, Inc.
The Royals: Season 1 Lego DC Comics Superheroes: Justice League — Attack of the Legion of Doom! (Blu-ray)