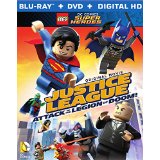 DC Comics buffs have been obsessively analyzing every frame of the latest Batman v. Superman trailer for clues that nod to a live-action appearance by their favorite hero. But for fans of Lego’s “DC Comics Superheroes” brand — which includes various movies, TV shows and videogames — the idea of a superpowered team-up is old hat. In fact, Lego is so far ahead of the curve that its newest offering — Attack of the Legion of Doom! — explores what happens when the bad guys form their own all-star team.

Things couldn’t be better for our heroes at the start of the film. The Justice League has defeated every single treat it has faced, and even a potential source of conflict — the election of a new leader — is resolved after minimal bickering. With everything going so well, Cyborg (voiced by Khary Payton) starts to feel marginalized and insecure about the fact that he may not be pulling his weight.

Remember when I said the Justice League had defeated every “single” treat it had faced? Well evil genius Lex Luthor (John DiMaggio) took note and decided to recruit his own villainous supersquad with help from Sinestro (Mark Hamill, sounding a lot like his version of The Joker) and Black Manta (Kevin Michael Richardson). After holding auditions on a Wipeout-style obstacle course, the Legion of Doom — which also includes Captain Cold, Cheetah, and Gorilla Grodd — attacks Area 52 and absconds with a valuable alien artifact that causes humanity to turn on the Justice League.

Even in this age of interconnecting cinematic universes, these kid-friendly yarns are simple enough that you don’t need to have seen previous Lego direct-to-DVD adventures to follow what’s going on. The zippy visual inventiveness that made me love The Lego Movie is present here, though on a much more modest level. The animators take advantage of the fact that they are not restrained in the way live-action filmmakers must be, which really benefits a cosmic superhero like the Green Lantern. The result is soaring slapstick. (Disco missiles and a Bat Gorilla Suit figure into the action equation.)

Lego’s DC Comics brand also has a healthy, knowing sense of humor about its roster of heroes, which is not something I expect to see when their live-action counterparts start popping up next year. Batman isn’t quite the hilariously gloomy jerk he was in The Lego Movie, but he’s still a comically humorless know-it-all. Superman’s squareness is amped up for comedic effect, Green Lantern and Flash are juvenile in their constant need to one-up each other, and Wonder Woman…is a nice, normal person. (Even in animated form, the girl is the least interesting superhero.)

I wish the same attention had been paid to the supervillains, since the movie is supposed to be all about them. I also felt the cheeky sense of humor was a little too much at times; I get that the excessive puns/one-liners are a spoofy nod at action flicks that do the same, but the ones here are groan-worthy on their own merits.

It’s no major spoiler to say Cyborg gets a chance to redeem himself and prove his worth to his superhero colleagues. Attack of the Legion of Doom wraps up with the Justice League extending an invitation to a new hero and — like any respectable superhero flick these days — features an end credits scene teasing the next villain. Both the new hero and villain will undoubtedly turn up in the next entry of this funny, family-friendly franchise

Lego DC Comics Superheroes: Justice League — Attack of the Legion of Doom! is presented in a small-screen friendly aspect ratio of 1.78:1. The 1080p image is arrived at with an AVC MPEG-4 codec at an average of 22 mbps. This direct-to-dvd offering is more overtly slick looking than The Lego Movie, which used CGI to achieve the look of stop-motion animation. Despite working on a smaller-scale, the production values are absolutely top-notch. This Warner Bros. Blu-ray offers a crisp, impeccable presentation with bold colors and terrific fine detail. There’s also a strong sense of depth between the animated characters and some of the photo-realistic backgrounds. This is a bright, fun visual treat that’s sure to charm.

The DTS-HD Master Audio 5.1 track may not be the most nuanced presentation I’ve ever heard, but it does a great job of keeping up with all the visual zip on the screen. The rousing score reverberates throughout the entire sound field and is sure to get kids pumped up. The sound of ever-shifting Lego bricks also flies from one speaker to the next, as does the whoosh of aircrafts, the streak of lasers being fired, and more. Even the subs rumble to room-rattling life during a rocket-powered surprise reveal. Overall, the track is extremely well-balanced and exciting. And speaking of this disc’s terrific sonic presentation…

Click, Zap, Boom! Creating the Sound Design: (19:51) This is a fun, revealing featurette that shines a light on an underrated part of moviemaking. (Especially all-CGI films that have to build a soundtrack from scratch.) Sound designer Rob McIntyre uses a Captain Cold pratfall to illustrate the difference between sound designing for slapstick comedy and sound designing for a slightly more grounded kiddie adventure. The most amusing parts involve clips of foley artist Vincent Guisetti using Lego bricks and other items to create the film’s sound effects. The big takeaway here is that there’s simply no substitute for the distinctive “Lego brick click.” Presented in HD.

The 77-minute movie feels like it’s over in a Flash.

Attack of the Legion of Doom! is a delightful, uncharacteristically baggage–free entry into the superhero sweepstakes. I recommend this film if you enjoy the irreverent humor of the Lego brand…or if you simply want to see the lighter side of saving the world.