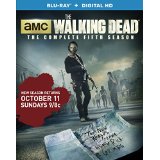 We have some hungry, undead guests shuffling into this week’s Round Up. Anchor Bay will release the latest batch of episodes from one of the most popular shows on television with The Walking Dead: Season 5. We’ll also have a review of Anchor Bay’s high-stakes Big Game. Meanwhile, CBS/Paramount brings us a trio of network hits with Elementary: Season 3, Criminal Minds: Season 10, and The Good Wife: Season 6. MPI Home Video offers a hearty Welcome to New York, Cinedigm introduces us to Camilla Dickinson, Oscilloscope Laboratories unleashes Animals, Lionsgate reveals Where Hope Grows, and Warner Bros. assembles Lego animated flick Justice League: Attack of the Legion of Doom!

As always, don’t be shy about letting us know which of these titles you’re most excited to watch or read about. And since we know people love free stuff almost as much as ravenous zombies walkers enjoy the taste of human flesh, don’t forget: once a month we’re going to give away a free DVD title from among the comments in our weekly Round-Up posts. You tell us what you’re interested in, and you might just get something free for sharing. The winners and their prizes will be announced the first week of every month right here in our Tuesday Round-Up post.

Lego DC Comics Superheroes: Justice League — Attack of the Legion of Doom! (Blu-ray) Once Upon a Time: Season 4 (Blu-ray)