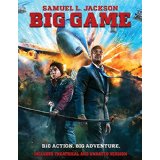 What is the world coming to when the President is forced to rely on a preteen kid as his only means of protection? Or at least that is what I’d be wondering if I was Samuel L. Jackson in Big Game. In fact, if I was him, I’d probably fire my entire staff after this adventure. Crash-landed in Finland, the President finds himself alone and being hunted with his only ally being a young kid who is undertaking a traditional rite of passage. I have to say, despite the high stakes, the movie managed to keep things somewhat lighthearted, thereby allowing it to appeal to larger audience. Movie watchers are about to see SLJ in a completely different role as the President instead of his usual action-packed roles.

One of the most powerful men in the world is reduced to prey after Air Force One is brought down over the woods of Finland. Seemingly the only survivor of the wreck, President William Alan (Jackson) Moore is found by young Oskari (Onni Tommila), a native boy who was in the woods to complete his people’s traditional hunter rite of passage, which requires spending the night in the woods and bringing back a trophy. Unaware of his surroundings, President Moore must rely on Oskari’s knowledge to survive, all the while attempting to evade the men who brought down his plane for the purpose of hunting him like prey.

I have to say I really enjoyed this film. It was nothing like I thought it was going to be, but for the first time and very long time I am actually happy it wasn’t. As I mentioned earlier, the stakes in this film are high. I actually don’t think they get any higher than this, but instead of treating it like a R-rated high-octane thriller, it was very lighthearted and done in a very believable way. Not to mention, I am so used to seeing Samuel L. Jackson in roles where he is kicking ass and taking names, but in this film he is the exact opposite. He is not a skilled fighter, but instead he is somewhat helpless; however, he  remains SLJ, giving some patented comical reactions in various situations.

Granted the film is not dripping with gore, which is a bit unrealistic given the situation; the overall flow of the film is excellent. The story kept a steady pace, not spending too much time in one sequence but constantly keeping things moving all the way to the conclusion. This is not a very long movie, but in my opinion it makes the most of its runtime. I wouldn’t have wished it to be any longer or shorter.

As suspected Samuel L Jackson is the main draw, and he does contribute to the film quite a bit. Like I said, it was really refreshing to see him be something other than an action star. A bit ironic given that this somewhat an action movie, but instead of being the one to face the odds, he takes a bit of a back seat in that department. Though seeing him like that was great, I must admit he was eclipsed by his much younger co-star, Onni Tommila; this actually turns out to be his story. It is a tale of overcoming impossible odds told from the perspective of someone who must overcome a few personal obstacles as well. It is a true blue underdog story, and who doesn’t love rooting for the underdog? The two characters also had a great dynamic, rooted in mutual respect. There was no belittling one another but rather a clear understanding that they needed to work together.

This is a movie I would definitely recommend everyone see. I don’t see it winning many awards, but it will definitely provide an entertaining experience to those who watch it. Like I said, this is a film about an underdog, and everyone loves an underdog.

Jeremy Butler is a film school graduate of the International Academy of Design and Technology. He is been writing for Upcomingdiscs since 2012; however, movies have played a big part of his life for much longer. Favorite genres include horror, science fiction/fantasy, and comedy. Favorite movies are V for Vendetta, Boondocks Saints, Kiss Kiss Bang Bang, and The Godfather.
Run Hide Die Lost After Dark (Blu-ray)