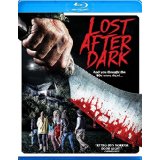 The tongue-in-cheek tagline for this film is the first of many signs that this throwback slasher flick doesn’t take itself too seriously. I’ve always thought the best parodies are the ones that show genuine affection, rather than superiority, toward the genre they’re mocking. Lost After Dark sometimes wobbles as it walks the tricky tightrope between homage and legit horror movie, but there’s no doubt the filmmakers enjoyed their many sleepless nights with the likes of Michael Myers, Jason Vorhees, Leatherface, and more.

Stop me if all any of this sounds familiar: Lost After Dark is set in 1984 and follows a group of teens as they head to a cabin for some underage debauchery. Adrienne (Kendra Leigh Timmins) is the virginal good girl who might finally hook up with star football player Sean (Justin Kelly), much to the delight of her best friend Jamie (Elise Gatien). Sean, fellow jock Wesley (Stephan James), and dorky Tobe (Jesse Camacho) procure a school bus for their adventure, which also includes preppy-jackass couple Johnnie and Heather (Alexander Calvert, Lanie McAuley) and saucy rebel Marilyn (Eve Harlow). The missing bus also draws the attention of intense faculty member Mr. C (Robert Patrick) back at the school.

The film actually opens with a 1977-set prologue that introduces us tobJunior Joad (Mark Wiebe), the last surviving member of a cannibalistic clan. On the way to Adrienne’s family cabin, the bus breaks down, and the group eventually seeks refuge in (you guessed it!) the Joad home. What follows is a pretty predictable bloodbath.

The thing that’s not predictable — and that sets Lost After Dark apart from the films that clearly influenced it — is the order of the deaths and the last man (or is it woman?) standing. After that brief, bloody prologue, it actually takes a good while for one of our main teen characters to meet their maker. (Not too long though: Lost After Dark comes in at a lean, mean 85 minutes.) But during that time, even casual horror movie fans won’t be able to resist predicting which one of these unfortunate fools will get it first. (Will it be the couple that sneaks off for some sexytime? Will it be the black guy?!)

Director Ian Kessner, working from a script he co-wrote with Bo Ransdell, has fun playing with audience expectations by using familiar, creeping camera angles that repeatedly frame the main characters as would-be victims. Once the teasing reaches its breaking point, Lost After Dark does manage to deliver some admirably gruesome deaths utilizing old-school, practical horror effects. (Including one particularly stomach-turning close-up of a jagged piece of glass piercing an eye ball.) On the other hand, I was surprised to see the movie passed on including at least one bit of gratuitous nudity among its hard-R rated thrills.

The film’s tone is rather tricky to nail down. Lost After Dark doesn’t have the outrageous and overt genre commentary of something like Cabin in the Woods, but it’s also not quite the ultra-faithful, poker-faced recreation of low-budget ’80s horror that House of the Devil was. In addition to the movie’s tagline, the afro wig James wears to play Wesley and Mr. C’s deadpan affection for disco music are pretty clear indications that this movie is at least partly joking around, even if it stops well short of being an out-and-out spoof. The movie also seeks to recreate the look of ’80s slasher flicks, but tossing in an inopportune “missing reel” felt too cute by half.

The acting is intentionally wooden, which provides a convenient cover for subpar performances. I get the sense, nonetheless, that this is a pretty impressive group of performers. Timmins makes for a pleasingly pure and appropriately bland heroine. The standouts, however, were Camacho (lending his dork hints of swagger), Harlow (a comely rebel who comes unraveled), and Calvert (relishing his douchebag role). Patrick is easily the biggest name in the cast, and he clearly has fun channeling every comically hardcore educator from 1980s cinema.

Unfortunately, Junior Joad himself isn’t much to write home about, so Lost After Dark doesn’t have a very memorable monster. Then again, that’s not exactly surprising. For better and worse, Kessner and Co. made a film that fondly and effectively channels horror films from 30 years ago…even if their own movie won’t come close to having that sort of staying power.

Lost After Dark is presented in an aspect ratio of 1.78:1. The 1080p image is arrived at with an AVC MPEG-4 codec at an average of 25 mbps. I alluded to this in my review, but the visual presentation here is meant to evoke the gritty, grimy look of films from the ’80s. As a result, we get plenty of debris, mild scratches, and other imperfections intentionally woven into the HD image. The colors of the tacky ’80s fashions are effectively muted, and black levels are terrifically inky, which makes it easy to keep track of all the horror at the Joad house. The 1977 prologue, in particular, features pretty prominent burned edges on both sides of the screen. I actually wish the film had fully committed to the throwback conceit. While many nighttime scenes look authentically grungy, there are also more than a few daytime moments early on where the presentation is bright, clean, and spot-on. It proves that this Anchor Bay Blu-ray can deliver the modern HD goods, but it comes at the slight expense of total visual immersion.

The Dolby TrueHD 5.1 track is also effective at transporting us back in time. The synth-heavy score by Eric Allaman has full run of the surround sound field. This is also an aggressive mix that offers extra pop for the brief instances of gunfire and punctuates some of the more graphic deaths with a gleeful “squish.” Directionality is especially effective, keeping the viewer on edge with ever creaky door and floorboard. Overall, this is quite a potent track that manages to stay well-balanced.

Lost After Dark won’t win any awards for originality, but that’s kinda the point. The filmmaking here isn’t as precise as other works that have paid homage to the 1980s, but you’ll still have a good amount of fun if you simply go along for the (bus) ride.

Think of this as ’80’s Horror Karaoke.

Big Game Contest: Win The Surface On DVD From Entertainment One