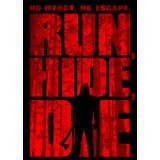 Honoring the memory of her husband, Addison Davenport sets off to a cabin in the woods with her four friends on the anniversary of his death. The friends go on their road trip, and once at their destination proceed to party. Little do these women know that they are not alone. A killer makes their presence known and starts torturing the girls. This could have been a great homage to classic eighties horror/slasher movies, but the creator couldn’t make a lot of the dialog coherent, nor could he make a meaningful plot. The dialog ranges from all the bad things we hated about the eighties horror scene, to all of the dialog I have grown to hate from newer horror films. It takes the “vulgarity for the sake of being vulgar” shtick from such classics as Friday the Thirteenth and Halloween. It takes the overly-dramatic pleading from torture films like Cry Wolf and Hostel. Neither of these themes are the greatest portions of the movies we hold as classics, and I would rather not be forced into remembering it. The plot has two twists. The first twist misses the mark so tremendously I had to avert my eyes. I am not going to go into too much detail, but after the twist is revealed, the killer loses all credibility and just turns out to be crazy. The second twist was just thrown at us. Like the dialog, it is trying to remind the audience of when twist endings at the end of a horror movie gave you one last scare. This twist left me less scared, and more annoyed. It seemed out of place and cheap.

The way this was shot can be split into two halves, the good and the bad. Unfortunately, the good is during the first half of the film where nothing is really happening, and the bad is during the second half of the film where people start dying. The first half of the film gives me exactly what I want from a horror movie: close-ups that leave the audience guessing what is happening off screen, and tension building still shots that let the audience in on something one of the characters is not aware of. The bad things include something I consider “horror movie sin”, which is confused action scenes. When the killer is grabbing the girls, I can’t tell what is going on; all I know is that there are struggles happening, then they are all immobile on the bed. How did we skip this? It is the chance for the creator to scare us more than in any other part of the movie. It should have been the longest part of the movie. The rest of the bad spans from dialog being muffled by the tortured screams of the girls. There is some good here to try to make up for the bad, but not enough.

The acting here is what finally wins me over. Sure, there are examples of overacting (like some dialog from a surprise character reveal), but it’s the best kind of overacting. Its overacting that I can relate to in a horror movie, and it actually makes the scenes more realistic. The girls are classic scream queens who give me just the amount of horror-filled jubilation that I would want from my actors. I can’t pick out one great performance, because the whole acting experience was great. If only they had a better movie to act in.

In conclusion, this movie has a short run time, and I could think of worse ways to spend an hour or so. If you are hankering for an all-female-led horror romp, you could definitely do worse. A lot of elements won’t make this an enjoyable watch, but it’s a good way to kill some time in October.