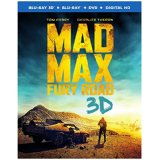 What a lovely day! The 3D Blu-ray for Mad Max: Fury Road leads a stacked pack of 23(!!) new releases that we’ll be reviewing here at UpcomingDiscs, breaking a record set way back in…ok, it was two weeks ago. Fortunately, we’ve gotten a pretty good head start: you can already read our takes on CBS/Paramount’s The Originals: Season 2 and Hawaii Five-O: Season 5, Anchor Bay’s Lost After Dark and Felt, Lionsgate’s Panic 5 Bravo, Image Entertainment’s Run Hide Die, Shout! Factory’s Out of the Vault: Halloween collection, and IndiePix’s Falling Star. CBS/Paramount will also hop on The D Train, sting us with Scorpion: Season 1, offer up a Good Kill, introduce us to Madame Secretary: Season 1, and (roundhouse)kick butt with a Walker: Texas Ranger 4-Film Collection.

In addition to Mad Max, Warner Bros. presents a bloody good dose of The Vampire Diaries: Season 6. You won’t have to visit a website far, far away to read about Star Wars — Rebels: Season 1 from ABC/Disney, which is also turning over the keys to Castle: Season 7. Anchor Bay attempts to avoid The Curse of Downer’s Grove, HBO sings the blues with Bessie, A&E Home Video saddles up for Texas Rising, and Comedy Central Studios intimidates with I Am Dale Earnhardt. Last but not least, Entertainment One rises to The Surface while XLrator Media goes for a Five Star rating.

Those last two titles will also be part of our ever-popular giveaways. (You can already enter to win The Surface.) Remember that once a month we’re going to give away a free DVD title from among the comments in our weekly Round-Up posts. All you have to do is comment on a Round-Up post — like this one! — and tell us which of these titles you’re most excited to watch or read about. The winners and their prizes will be announced the first week of every month right here in our Tuesday Round-Up post.