Posted in: No Huddle by Jeremy Butler on September 5th, 2015 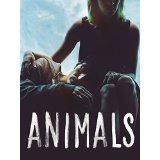 Not really sure the title matches the film, but then perhaps there is a hidden significance that I’m not getting. Well, here is a real gritty tale about addiction told within the context of a love story. Animals follows a young couple that appears to be so deeply in love that they are willing to do anything for one another. In fact the only thing that seems to have the capacity to tear them apart is their shared drug addiction. This film really emphasizes the ideal that couples must have a shared interest. Sorry, that was my attempt at humor.

Animals pulls no punches and really shows the gritty side to addiction, all the while attempting to show a love story. Throughout the film, Bobby and Jude commit petty crime in order to support their habit. In the beginning their cons are somewhat impressive and have a sort of elegance to them; however, as withdrawal sets in, the cons become more and more flawed, and their desperation is almost palpable. This is something that was illustrated very well: desperation. In select scenes, I began to feel a slightly bad for them, especially when the pain and agony of their situation began to tear at the one thing that valued, each other. Here is the conflict; it was those scenes when the film had the most effect and was truly compelling such as in the conclusion of the film when Bobby forces Jude to make a decision that will affect their relationship. In truth, you know what his answer will be before he says anything, but you feel a great deal of dread in anticipation.

I commend the two leads for the way they immersed themselves in their characters; their performances made them almost indecipherable from the real thing. Their portrayals were strongest during the periods of withdrawal; every twitch and shake made me a believer. Kim Shaw, who played Bobby, was definitely the stronger one in my opinion; however, the character of Jude was the one that had more to contend with. The best performance of both parties was during the schoolyard scene, as the two sit contemplating doing something reprehensible to get the money that they so desperately need. That scene was the high point of the film, because it is the moment where the audience gets a real eye-opener to the effect addiction can have on a person. That scene emphasizes everything I meant about the film pulling no punches.

The film’s conclusion, or to be more direct the final conversation between Jude and Bobby, is a close runner-up for the most powerful scene in the film. As the two face a choice about the status of their relationship, as mentioned before, you can already sense where the story is going, but that feeling of dread is monumental achievement. It is rare that I have a film that effects in such a way that this one did. It really made me think and pay attention to aspects that I would normally not look at twice. That is a true testament to the film’s accomplishment. There is a bit of a bittersweet ending, but I must say that I think that was probably the best note to end it on.

This was a truly eye-opening experience for me. Granted, there is a love story element to the film, but it is by far the least important aspect. The captivating portion is the addiction, the desperation, and the depths that humankind sinks to when gripped by such a force. Albeit I imagine this point of view may not have been the overall point of the film, it is a byproduct nonetheless. When you watch this film, you will confront the gritty underside of addiction, and it will likely have a profound impact on you as it did on me.

Jeremy Butler is a film school graduate of the International Academy of Design and Technology. He is been writing for Upcomingdiscs since 2012; however, movies have played a big part of his life for much longer. Favorite genres include horror, science fiction/fantasy, and comedy. Favorite movies are V for Vendetta, Boondocks Saints, Kiss Kiss Bang Bang, and The Godfather.
The Curse of Downers Grove (Blu-ray) Texas Rising (Blu-ray)