The Curse of Downers Grove (Blu-ray) 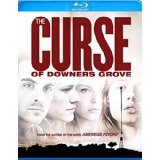 If nothing else, The Curse of Downers Grove lives up (or rather down) to its morose title. It’s too bad because this (non-)thriller actually has a promising premise: every year, a supposed curse in the titular suburban Illinois town kills a senior at the local high school. The movie could’ve gone for darkly comic thrills or tried to construct a mystery around who the latest victim might be, to name just a couple of examples. Instead, this shoddy, inert flick squanders a variety of opportunities on the way to its preposterous conclusion.

The action here picks up with one week to go in the school year. Chrissie Swanson (Bella Heathcote) is a sharp, skeptical senior who doesn’t fully believe in the curse, despite witnessing the previous year’s victim plunge to his death. Did the curse kill him and the other teens or was it bad luck and good ol’ fashioned stupidity? I’m sure the fact that the high school was built on sacred Native American ground has nothing to do with anything.

Chrissie might be a Curse non-believer, but she nevertheless begins fearing for her safety after a violent run-in with a jock named Chuck (Kevin Zegers) leaves him disfigured and looking for revenge. Fortunately, Chrissie has support from younger brother Dave (Martin Spanjers), best friend Tracy (Penelope Mitchell), neighbor boy Ian (Mark L. Young), who has a not-at-all-secret crush on her, and Bobby (Lucas Till), the hunky, good-guy mechanic Chrissie’s actually seeing. (In case you’re wondering where Chrissie’s parents are during all this: dad is a meth-head who took off years earlier, while mom, played by Supergirl Helen Slater, inconveniently leaves town at the beginning with her new beau.) Everything comes to a head during a curiously inevitable house party that Dave and Tracy insist on hosting…and which draws the attention of Chuck and his meathead cronies.

The director is Derick Martini, but the name the movie wants to sell is that of author Bret Easton Ellis, who is best known for writing novels like “American Psycho” and “Less Than Zero.” Ellis is listed as a screenwriter, along with Martini, so I assumed he was adapting one of his own books. Instead, the film is based on the 1999 novel “Downers Grove” by Michael Hornburg. As if that wasn’t disorienting enough, The Curse of Downers Grove claims to be “inspired by true events,” which is about as flimsy as you can get. (For instance, I wouldn’t have to strain very far to claim that Mad Max: Fury Road was “inspired by true events.”)

I suppose the “true” part could be that Downers Grove is a real-life suburb of Illinois. (The movie, according to IMDb, was filmed in California.) Heck, it’s actually been featured on Forbes’ list of America’s Friendliest Towns. Unfortunately, the film doesn’t even mention this. I say “unfortunately” because the movie could’ve at least had some fun with the notion of all this violence and unpleasantness going down in such an idyllic setting. At best, it’s a missed opportunity for an ironic chuckle. At worst, it badly misrepresents one of the nicest towns in the U.S.

Then again, nodding to the real Downers Grove is just one of many wasted opportunities. There are big-picture whiffs, like zeroing in on Chrissie as the curse’s target. (Why not introduce more potential candidates for the sake of suspense?) And even if the filmmakers wanted to focus exclusively on Chrissie, the movie could’ve been rigged as a Final Destination-type contraption that playfully teases us with her demise. Instead, Martini seems content to continually assault us with Chrissie’s ghoulish visions. (The visions — which get an extended cut after the end credits — also hint at Chrissie having a psychic connection with Chuck, but that thread is never developed.) More specifically, a few characters (Chrissie’s missing meth head dad, too-good-to-be-true Bobby) don’t end up being as interesting as the script suggests they might be. Tom Arnold also pops up as Chuck’s scumbag ex-cop of a dad, who solely exists to explain why the cops are nowhere to be found at the ludicrous climactic assault…and to explain why Chuck is such a scumbag.

It’s too bad because the cast is game. Heathcoate sneaks in some sarcastic spunk into her narration and her performance, which makes her livelier than the Kristen Stewart prototype she’s playing. Zegers is also all-in on conveying Chuck’s cowardly monstrosity. The standout, however, was the refreshing swagger Spanjers brought to his role as Dave, who’s bold enough to stand up to a pack of potential killers…and (more impressively) to successfully mack on a girl who’s a couple years older than him.

Unfortunately, a few solid performances and a cool premise gone bad aren’t enough to stave off the Curse that really hovers over this movie: sloppy filmmaking.

The Curse of Downers Grove is presented in an aspect ratio of 2.40:1. The 1080p image is arrived at with an AVC MPEG-4 codec at an average of 26 mbps. The grayish, de-saturated palette is completely appropriate for this grim story. The baseline image features bits of aliasing and ghosting, but is generally clean. (It might’ve actually benefited from a little grit and grain.) I say “baseline” image because the movie repeatedly cuts to Chrissie’s visions, which feature intentionally distorted color and contrast levels. Black levels are satisfactorily deep, particularly during the climactic showdown at Chrissie’s house.

The Dolby TrueHD 5.1 track is heavy on the aggressive “thriller” sound effects spanining all channels. Subs only make a cameo during an early party sequence, and rear activity is understated but effective. (I would’ve liked a more active, creeping sound field during that final assault.) Overall, this is a serviceable, dialogue heavy track that doesn’t quite elevate the action on screen.

Behind the Scenes of The Curse of Downers Grove: (4:34) Rarely have I seen the term “behind the scenes” taken so literally. There are no interviews or insight here, just clips from the film accompanied by the corresponding on-set footage. The floating behind the scenes footage is curiously taken from the vantage point of a crew member hanging out and watching the production unfold.

Despite the title and other horror movie echoes, The Curse of Downers Grove has more in common with revenge/stalker films like Fear.

Of course, that slight bit of misdirection is the least of this movie’s issues. A few solid performances aren’t enough for me to recommend you pick this one up.