Posted in: Disc Reviews by Gino Sassani on September 5th, 2015 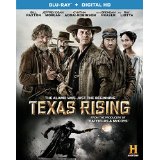 “1836, Republic of Texas. The Mexican territory is home to thousands of US settlers. Tensions rise as Comanche and Kawakawa fight to keep their lands. Outlaws roam free, and slaves are caught in the crossfire. Mexican General Santa Anna battles to reclaim the land. US President Andrew Jackson is hesitant to intervene, and Texas has no choice but to declare itself an independent nation… The Alamo in ashes, pioneers, Tejanos, Indians and soldiers have no choice: fight or die.”

Houston, we have a problem. No, I’m not talking about an ill-fated and ill-numbered Apollo craft hobbled between the Earth and the Moon.
But that was the call that went out to General Sam Houston in 1836 as General Santa Anna massacred the residents of The Alamo and continued his bloody march through the newly-formed Republic of Texas. Only one man could lead an army against him, and he appeared inclined to do nothing at all. But it was all part of a skillful strategy that would turn the course of a war and North American history itself. He’s the man the city was named for. This is how he lived up to that name. The story starts here.

“Don’t dawdle. Don’t get yourself killed. The future of Texas is at stake.”

After The Alamo fell, there was a war fever moving not only through Texas but the United States, as well. While he couldn’t officially interfere, President Jackson (Kristofferson) kept his finger on the pulse of the situation in Texas. He would help in subtle ways by offering advisors and supplies. It was his support that kept Sam Houston (Paxton) in charge when so many were calling for his head. Those include his own leaders within his ranks. The most vocal of these is Mosley Baker (Crispin), who delivers speeches to the men trying to rouse them into more aggressive action and going over Houston’s head trying to have him removed as general. Fortunately for Texas, the plots never amounted to anything, and Houston was able to wait for his moment.

There’s a lot of time that needs to be filled here for what amounted to a 20-minute battle in history. The mini-series is produced by History, so you might expect a bit more historical accuracy and detail. Instead the drama route was taken; after all, this is entertainment first, and an impressive cast was gathered to play a more compelling group of characters. Some are actual historical figures; many are fictional. It all starts with Bill Paxton, who is certainly a strong presence as Sam Houston. It’s a difficult role. Paxton has to portray the strength of a man who was waiting for just the right moment, and because of the padded time that moment appeared too long in coming for us as well. I found myself rooting for Mosley Baker, if only to get to the action I knew must surely be coming… any day now. Fortunately, Paxton does a solid job of satisfying us while we wait. It turns out he’s related to Houston through his mother’s family. Much of that filled time is spent in more intimate character moments with Houston and his men.

This is where Crispin Glover comes in. He provides the perfect counter to Houston himself, careful about treading the line between insubordination and his passionate feelings for taking on Santa Anna and the army they hate so much. The Alamo feelings run high, and when yet another fort falls, the waiting is near impossible for characters like Baker. The character itself is very much in the mold of the Southern General you see so often depicted in the Civil War films and television shows. Crispin is nearly unrecognizable under the heavy facial hair common to the time. He looks very much like those early photographs we’ve seen so often from the later Civil War. His accent might be a bit forced, but at least he carries it with some consistency. There’s point when he finally does become too much of a caricature.

Other characters we follow here are two “brothers” who eventually make it to the Houston’s rangers and become a part of the fight after a rather eventful series of misfortunes on the road lead them to a town run by Prison Break‘s best bad guy Robert Knepper as an unscrupulous land broker who runs a small town with his authority. He’s the kind of character we just can’t wait to see get what’s coming his way. He’s been banking on the Mexicans winning the war, and we don’t need to include a spoiler alert to tell you that just ain’t happening.

Christopher McDonald is one of the show’s standouts as Houston’s right-hand man, Henry Karnes. He’s seriously underused here. Ray Liotta puts in one of his best performances ever. I usually think he has a tendency to overact and smirk a little too much. Here he plays quite a dynamic and emotional character. He has a tremendous story arc, and one I found compelling even though it was one of the more blatantly fictional stories of the series. He was a survivor of The Alamo who was shot and left for dead in a mass grave. He woke amid the bodies and escaped. From there he provides the only real resistance to the Mexican army for a long time. The event has driven him literally insane, and he travels about ambushing and killing Mexicans in bloody, vicious, and heinous ways. He then leaves behind a tableau that would rival anything you might see on Criminal Minds.

Another huge stand out is Jeffrey Dean Morgan as “Deaf” Smith. He’s an original Texas Ranger and close friend of Houston’s. He’s actually deaf and spitting up blood. The assumption here is he’s likely dying of TB. Still, his call to duty has him willing to literally fight until he dies.

Brendan Frasier plays a Ranger who was once married to an Indian woman and has adopted many of their ways. Thomas Jane plays James Wykoff. Jeremy Davies has the comedic relief as Knowles. Knowles is a coward and deserted his unit. Of course, his story is that they were out to get him. Houston wants to set an example and holds a Court Martial and sentences him to death. He later remarks that if he escapes, he would not consider that a travesty. Knowles doesn’t escape, but circumstances allow him to step up and earn the trust and respect of the Rangers. He still manages to do all of this with a lot of fast-talking con and more than a little sniveling.

The series spends a long time on the character of Emily West, played by Cynthia Addai-Robinson. She’s the supposed inspiration for the song “The Yellow Rose Of Texas”. She was a survivor of The Alamo who saw her brother die in the massacre of the prisoners. She was also a former lover of Houston’s. Together they hatch a plan where she seduces Santa Anna with the intention of killing him. This is a part of the story I am least familiar with, but it stretches believability throughout. It’s hard to imagine Santa Anna not being suspicious, and he even takes her back after finding a gun he suspected was to be used by her to kill him. The actress is quite good, but I found the dynamic here a little too hard to take. It was obviously intended to add some sex appeal to an otherwise slow-burn drama that was too long for its own good.

Finally we have the casting of Oliver Martinez as Santa Anna. He’s a bit more suave and attractive than the historical figure, playing more into the Latin Lover mold than the inspirational general. Of course, he is cold and calculating, killing prisoners over a glass of wine. All of that comes through in the script, and not so much because of Martinez.

Texas Rising is presented in its original aspect ratio of 2.40:1. The 1080p image is arrived at with an AVC MPEG-4 codec at an average 25 mbps. The lighting is rather harsh, which doesn’t allow for much in color or sharpness. Detail does reveal itself in close-ups and interior or night shots. The high-definition image presentation is likely pretty much on spot for the original broadcast. Black levels are fair, and the production values, while high, don’t display the kind of texture and detail of a show like Hell On Wheels.

The DTS-HD Master Audio 5.1 is pretty minimalistic, serving the dialog well. The surrounds allow for a few exciting moments during battle, but there isn’t anything here I would call dynamic or immersive.

Capturing Revolution – The Filming Of Texas Rising: (14:35) Cast and crew talk about the production and the iconic characters they are playing. There’s plenty of behind- the-scenes footage featuring the locations and lots of the typical love-fest material.

Sam Houston – A Man Of Revolution: (13:58) Profile of Sam Houston from historical experts and cast and crew.

About the best thing I can say about the series is that it often looks very good. It was filmed in Durango, and not Texas where many Westerns were once made. You can see some rather fine John Ford vistas that really make this far more of a Western than a docudrama. Throw in some Indian skirmishes and a few of the trappings of the typical Western, and you have the package that is Texas Rising. It’s intended to put some historical perspective, if not exactly accuracy on the old battle cry: “Remember The Alamo”.

Gino Sassani is a member of the Southeastern Film Critic's Association (SEFCA). He is a film and television critic based in Tampa, Florida. He's also the Senior Editor here at Upcomingdiscs. Gino started reviewing films in the early 1990's as a segment of his local television show Focus. He's an award-winning recording artist for Omega Records. Gino is currently working on his 8th album Merchants & Mercenaries. Gino took over Upcomingdiscs Dec 1, 2008. He works out of a home theater he calls The Reel World. Favorite films: The Godfather, The Godfather Part II, The Body Snatcher (Val Lewton film with Karloff and Lugosi, not the pod people film), Unforgiven, Gladiator, The Lion King, Jaws, Son Of Frankenstein, The Good, The Bad And The Ugly, and Monsters, Inc.
Animals Hill Street Blues: Season 6