Posted in: No Huddle by Jeremy Butler on September 8th, 2015 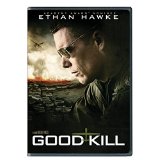 Good Kill is a term used by drone operators to signify whether ordinance have successfully hit the intended target however the term takes on some much more meaning. Ethan Hawke portrays a former jet pilot now transitioning into a position as a drone operator. Day in and day out, he surveillances areas from thousands of miles away periodically eliminating targets that would look to destroy American lives. However when his section is loaned out to the Central Intelligence Agency, the clear cut targets become less clear cut and both his personal and professional life begin to suffer as he struggles with the morality of what he does.

Ethan Hawke is Major Thomas Egan, a former jet pilot transitioning into the position as a UAV operator. Egan is not entirely comfortable in his new position, preferring the inside of a fighter jet to a bunker. Early on, it is clear that Egan is trouble by his situation. Despite being able to go home and be with his family as opposes to being deployed with the possibility of never seeing them again, Egan is as his wife would say is miles away.

His situation worsens after his unit is reassigned to assist the Central Intelligence Agency with identifying and eliminating targets. Early on, members of the unit including Egan’s superior officer Lieutenant Colonel Jack Johns (Bruce Greenwood) begin to notice that the targets that contact is identifying appear to be more civilian than immediate threats. However the group which refers themselves as “Langley” asserts the accuracy of their intelligence and Egan is forced to comply delivering aerial attacks creating high collateral damage. Egan for his part chooses to suffer in silence while his co-pilot and new member to the unit Airman First Class Vera Suarez (Zoe Kravitz) is extremely outspoken about the moral ambiguity of the attacks and how they are simply creating more enemies than they are destroying.

With every passing day, Egan’s professional and personal life deteriorates. His relationship with his wife (January Jones) suffers the most as his distant attitude and paranoia of her fidelity creates a rift between the two that they may not make it back from.

A unique and very interesting film that forces the audience to ask themselves the question of what is moral and what is right? That was essentially the most significant theme of the story in my eyes. The story unfolds in such a way that you never have to guess what characters are thinking with the exception of our protagonist and trigger puller. Ethan Hawk has always been a bit of a conundrum for him, as I have yet to see a film he encompasses a full range of emotion. He always seems to be type casted as a man of few words and brooding. That said, that was the perfect attitude for this character as his internally struggle is essentially to the successful of the film.

The cast really delivered in my opinion though they were placed in very basic archetypes such as Greenwood as the party line guy who follows orders even if he does not agree with them, Kravitz as the outspoken newcomer who has yet to learn to pick her battles, Jones as the neglected housewife who simply wants her husband to open up to her, and Hawke as the guy who feels the weight of the world his shoulders and struggling to hold it all together. That said, it is the way that they embrace their characters that give each character life. Greenwood delivers some key points that will have you nodding in agreement with his perspective. Kravitz is very persuasive when she argues the immorality of their actions highlighting the common man’s linear assignment of blame such as if they lose a love one in a drone strike they are highly likely to consider the reason that made the attack necessary but rather simply blame those responsible thereby creating a new enemy. Watching Jones as she continuously attempts to salvage her relationship with her husband and tries to be confidant will make you feel for her every time you see her rebuffed. Finally, Hawke despite the closed off nature of his character, you can see the cracks in the foundation, he is a man that truly loves and is simply trying to do the best he can and keep them safe.

The story does drag a bit in the minute with the constant attacks. I understand their necessity in regards to showing the breakdown of the protagonist but after the first few, the audience gets the point and the continued sequence merely becomes redundant. In that regard, that is probably my only complaint other than the one landmine that the story successfully sidestep which in my opinion if executed would have damage the integrity of Kravitz’s character as well as her credibility. This was a truly thought-provoking film that ending on the best note in my opinion. Not strictly an action pack thriller but a worthwhile feeling likely to lead to an interesting debate.

Jeremy Butler is a film school graduate of the International Academy of Design and Technology. He is been writing for Upcomingdiscs since 2012; however, movies have played a big part of his life for much longer. Favorite genres include horror, science fiction/fantasy, and comedy. Favorite movies are V for Vendetta, Boondocks Saints, Kiss Kiss Bang Bang, and The Godfather.
Hill Street Blues: Season 6 Star Wars Rebels: Complete Season One (Blu-ray)