Posted in: No Huddle by Gino Sassani on September 8th, 2015 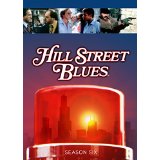 “Let’s Be Careful Out There!”

Hill Street Blues turned television on its head. It featured an incredible-sized ensemble cast. The use of so many characters was a considerable risk. Would the writers be able to provide us with enough meat for each to care what happens to them? The answer was a resounding yes. We cared. We cared so much that Hill Street Blues broke the standing record for Emmy nominations and wins before its seven-year journey ended. Bochco used stories that carefully intertwined each character in a tapestry that never quite ended. Episodes were not wrapped up into tidy little packages of resolution each week. Some storylines took the entire seven years to tell. He wasn’t afraid to kill off a beloved regular cast member, so we were always kept off guard. No one was invulnerable. That doesn’t mean you were not treated to a full story with each episode. The formula usually allowed for one complete story each episode, a part of a 3-5-story arc, and finally threads that might weave themselves through years of the series. There just weren’t any throwaway lines or characters. You could never be sure where one minor thing might blow up into compelling drama down the road.

Hill Street Blues was the first cop drama to put the focus on the characters and less so on the job. Of course, that didn’t mean the police drama was neglected at all. Each episode would begin with roll call in the morning and end with some of the characters dealing with the day’s aftermath. Most often our parting shot was Captain Furillo and Joyce in bed talking about their day. Each episode was basically a day in the life of the cops and denizens of this precinct. Hill Street allowed these cops to have personalities, and it was not only the strength of these personalities that dominated the series, it was how they interacted with each other. For the first time in television you saw very distinct sides of a character depending on who they were interacting with and where that relationship might be. Relationships were not stagnant; they evolved. Characters came in and out of each other’s lives. The job was always there, but how it impacted these people took center stage.

Hill Street Blues existed in an entirely fictional city. The city’s name was never mentioned. The cars and badges merely used the words Metropolitan Police. Most of the filming was in L.A., but the city was most definitely a midwest environment. You could take clues from the climate and the culture. Chicago is the closest to Hill Street’s city. The police cars copied that city’s designs, and once Belker was knocked out by a bad guy and placed in the baggage hold of a bus that went to Springfield, IL. He was able to make the trip there and back in the space of a single shift. My guess was always Chicago, but Bochco and company were always careful not to pin themselves down to a location. Most of the establishing shots that repeated throughout the seven years are indeed Chicago, although the series was based on the Hill District of Pittsburg where Bochco and many of the cast members went to college.

Hill Street changed the future of television with this kind of storytelling. It’s common as dirt now, but Hill Street did it first. And it wasn’t just the characters and stories. The look of the show set the stage for shows of the future. Roll call and the action were done hand-held. It had a documentary feel without making us dizzy. Even the stable camera work displayed a gritty reality that is, once again, so common today. Credit Robert Butler for the show’s unique and often copied look. Also new to Hill Street was the way action and dialog were filmed. John Wells would later refine the walk and talk, but he didn’t pioneer it. It all started here. You would be with one group of characters, and as that scene was finished another character or two would move into camera and begin another scene completely with no breakaway at all. Hill Street boasted 4- and 5-minute takes, which is unheard of even today. It happened flawlessly and gave us a heightened feel of reality.

With all of its awards and innovation, it’s hard to believe the show almost didn’t make it. At a test showing it rated lowest of any pilot screened that season. It is still today the lowest-tested pilot that ever actually got picked up. Never a dynamo in the ratings, the show’s quality was appreciated by the following it did have. I cleaned up in the Emmys and holds the record today for most nominations and wins in a single season. In 1982 it was almost as if there wasn’t another drama on the air. Hill Street cleaned up, and deservedly so.

It’s also a credit to Bochco and his team that many of the actors continued careers not in front of, but behind the camera. Others would be so typecast because of their brilliant work here that they never enjoyed the same success again. A couple died. Michael Conrad passed in the third season to make way for Robert Prosky, who went on to establish his own tone for the show. Kiel Martin was, in reality, as troubled by booze and drugs as his character J.D. He died shortly after the show went off the air. It was Bochco who forced him into rehab, relating that for decades Martin hadn’t been clean or sober a day in his life. He was an awesome actor who could have had a great career. His scene when blaming himself for the death of a fellow detective in the bathroom of a bar is one of the most powerful moments in the entire series. Rene Enriquez, who played Ray Calletano, also passed just three short years after the series ended. Both actors died in 1990. Trinidad Silva played the gang leader Jesus Martinez, who would later turn his life around and get a law degree. Unfortunately, the actor wasn’t so lucky, and we were denied seeing him again when he died in 1988, just a year after the show ended. He was in the middle of filming the movie UHF when he died in a car accident. That film has a dedication to the young actor.

You’re still reading this review? I’d have thought by now you’d be watching this impressive collection of Hill Street Blues. I must say there hasn’t been a show on television I have watched over as often. I can’t even watch Star Trek this many times. For some reason it just never gets old. There are so many interesting characters and storylines that it always feels fresh. OK, so it is dated. After all, watching Belker peck away at his typewriter brings back painful memories of the pre-PC days of yore. Still, you won’t find a better cop show anywhere. I am thrilled to see the extras aren’t being skimped on here. So pick it up. What else you gonna do with that “pocket full of quarters”?

Gino Sassani is a member of the Southeastern Film Critic's Association (SEFCA). He is a film and television critic based in Tampa, Florida. He's also the Senior Editor here at Upcomingdiscs. Gino started reviewing films in the early 1990's as a segment of his local television show Focus. He's an award-winning recording artist for Omega Records. Gino is currently working on his 8th album Merchants & Mercenaries. Gino took over Upcomingdiscs Dec 1, 2008. He works out of a home theater he calls The Reel World. Favorite films: The Godfather, The Godfather Part II, The Body Snatcher (Val Lewton film with Karloff and Lugosi, not the pod people film), Unforgiven, Gladiator, The Lion King, Jaws, Son Of Frankenstein, The Good, The Bad And The Ugly, and Monsters, Inc.
Texas Rising (Blu-ray) Good Kill