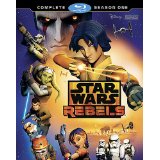 The Star Wars universe is famously vast, and that’s before the Force even Awakens this Christmas and kicks off a new series of feature films. (And let’s not even go down the Expanded Universe rabbit hole.) My point is that it’s been almost 40 years since Star Wars premiered, and the army of artists who have taken on George Lucas’ iconic creations haven’t even come close to running out of material to explore. Disney XD’s Star Wars Rebels is an engaging, thoroughly zippy entry that is likely to entertain its intended young target audience along with those who have been obsessed with the Force since a long time ago.

“The Emperor has foreseen a new threat rising against him. The children of the Force…they must not become Jedi.”

Rebels tucks itself into the space between the beloved original trilogy and the more maligned prequels. The animated series is set 14 years after the events of Revenge of the Sith and five years before A New Hope. The action largely takes place in Lothal, a remote planet in the Outer Rim Territories. Lothal is occupied by Imperial forces, much to the chagrin of a cynical teenager named Ezra Bridger (voice Taylor Gray). Ezra’s parents had dared to speak out against the Imperial occupation, which led to them getting taken away and Ezra being orphaned as a little boy. As a result, Ezra has grown accustomed to only depending on himself while sticking it to the Empire whenever he gets a chance.

In fact, it’s that rebellious spirit that gets him tangled up with a ragtag crew that is trying to steal some Imperial cargo. There’s Hera (Vanessa Marshall), the level-headed, maternal captain and pilot of the “Ghost” starship; Zeb (Steve Blum) a Lasat and the crew’s gruff, boorish muscle; Sabine (Tiya Sircar) is a brash, hyper-competent former Imperial Academy student who is good with languages and graffiti; and Chopper (cheekily credited as playing “Himself”) is the irritable R2-D2-like droid. The crew is led by Kanan (Freddie Prinze Jr.), a stoic, rough-and-tumble young man who also happens to be one of the last surviving Jedis. When Ezra displays Force abilities during a daring mission with the Ghost crew, he decides to stay on so he can be trained by Kanan. Of course, those same abilities also draw the attention of the Empire, namely Agent Kallus (David Oyelowo) of the Imperial Security Bureau. There’s also the frightening Inquisitor (Jason Isaacs), a Dark Jedi charged with hunting down anyone with Force abilities.

Most of this information is dispensed in the two-part “Spark of Rebellion”, which is presented as Episodes 1 & 2 here but aired as a 44-minute intro movie prior to the show’s 13-episode TV run. Much of Rebels hews very closely to the rambunctious tone and spirit of Firefly, which itself was obviously influenced by Lucas’ original trilogy. Many of the episodes find the “Ghost” crew subverting Imperial forces by freeing oppressed captives or simply running missions so they can feed themselves and others.

There are a couple of standout episodes that somewhat deviate from this formula. I especially enjoyed Ep. 6/“Breaking Ranks,” in which Ezra goes undercover as a stormtrooper; it gives us another peek at an under-explored part of the Star Wars universe. Rebels also goes into trippier territory with Ep. 10/“Path of the Jedi,” which is largely set in a hidden Jedi temple where Ezra’s training goes into hyperdrive.

Ezra also walks out of the episode with a customized lightsaber, which is one of many neat tricks this show has up its sleeve. The main characters stick pretty closely to their familiar archetypes during this first season (“Street rat” Ezra actually reminded me of Aladdin), and the writing can be a little on-the-nose. (Somebody actually remarks to Ezra that he’s “not too good at following orders.”) However, every episode has at least one large-scale action sequence, and more than a handful of them are legitimately thrilling. (I was a fan of any lightsaber battle between Kanan and the Inquisitor.) The tone is appropriately light, but there is still room for genuine drama; Ezra’s anger over losing his parents leaves him vulnerable to the dark side.

If that sounds a little too familiar, that’s not exactly an accident. Rebels openly embraces its links to the original trilogy. (There are several instances when one of our heroes blurts out “It’s a trap” when a mission threatens to go south.) More importantly, Rebels is technically the first Disney-produced Star Wars spinoff since the Mouse House acquired George Lucas’ galactic empire, which adds a crucial layer of authenticity when a classic character shows up. That means that the voice you hear when Darth Vader cameos belongs to James Earl Jones. Same goes for guest appearances by the likes of Yoda (Frank Oz), C-3PO (Anthony Daniels), and Lando Calrissian (Billy Dee Williams). Grand Moff Tarkin also appears for a deliciously menacing guest arc, but he’s obviously not voiced by the late Peter Cushing. (Actor Stephen Stanton does the honors.)

Rebels is created by Simon Kinberg, Dave Filoni, and Carrie Beck. Kinberg will have a say in how future Star Wars projects play out, and Filoni previously served as showrunner for the animated Clone Wars series. The season wraps up triumphantly and with a pair of surprise appearances that will reverberate into season 2: one of them involves the return of a Clone Wars favorite, while the other teases a bigger Rebels role for one of the most iconic figures in the Star Wars universe.

Star Wars Rebels: Complete Season One is presented in its original aspect ratio of 1.78:1. The 1080p image is arrived at with an AVC MPEG-4 codec at an average of 27 mbps. Rebels is a 3D CGI animated series that (figuratively) leaps off the page thanks to its big, bold colors, which can be seen in everything from Ezra’s piercing blue eyes to blaster fire and Sabine’s art. Black levels are also phenomenally deep; any scene set in outer space or showing off the star-dotted sky is a showstopper. There’s also fantastic fine detail, though that’s most apparent in the stunning backgrounds. The one place where it’s most obvious this is a top-notch TV production vs. a top-notch animated feature is in the character design. Closeups of our heroes and villains don’t hold up quite as well to scrutiny. Whereas in a Pixar production, for example, you might be able to pick out individual hairs on a character’s head, there’s a glossy sheen to the proceedings here. But that’s only a minor quibble: I mean, did you hear the part where I said this is a top-notch TV production?

The Dolby Digital 5.1 track, like the first season Clone Wars set before it, deprives fans of the lossless DTS-HD audiophiles undoubtedly crave. There’s plenty of good news here though. First off, Clone Wars Blu-ray releases eventually offered a lossless mix with future home video releases, so there’s hope yet. Secondly, I believe the difference between what a lossless track would offer and what we get here is largely indistinguishable, only rearing its head during quieter moments that might be presented in more subtly dynamic ways. Most importantly, this track absolutely impresses on its own merits.

There is very strong immersion and directionality throughout all channels, and the track remains quite well-balanced during the show’s frequent, chaotic action sequences. I also enjoyed the subtle way the subs rumbled to life during the Imperial March. (John Williams’ classic Star Wars score is solidly adapted by composer Kevin Kiner.) The Imperial March is one of many iconic sounds — along with the lightsaber hum, blaster fire, and even a Wilhelm scream — that get their due here and help this show slide right into the Star Wars canon.

Rebels Recon: (1:21:12) Every episode has an accompanying “Rebels Recon” that is hosted by StarWars.com social media correspondent Andi Gutierrez and takes us behind the scenes with cast and crew. These could’ve easily been throwaway bits of promotion, especially since the one that accompanies the first episode takes us to the series’ red carpet premiere. However, there’s actually some pretty terrific insight to be gleaned from these, including links to the larger Star Wars saga. (This is also a great place to catch some nods to the original trilogy you may have missed.) Features a Play All option in Disc 1 and 2.

Rebels Infiltrates Star Wars Celebration: (4:03) Cast and crew visit a fan convention in Anaheim, participate in a Q&A, and screen the season 2 premiere. (Alas, we’re not privy to that last treat.) Fun little feature, especially for the spot-on Rebels cosplayers.

Star Wars Rebels: The Ultimate Guide: (22:05) Freddie Prinze Jr.’s Kanan (flatly) narrates an overview of season 1, which feels superfluous given that we already have all of season 1 at our disposal with this release.

Rebels Season 2 — A Look Ahead: (7:06) Filoni dishes on what we can expect (including a “top secret character”) for season 2. At the end we get an extended trailer for the new set of episodes.

Short Films: Each of these four mini-offerings clock in at (3:02) and served as an appetizer for the series premiere. “The Machine in the Ghost” finds long-suffering Chopper amusingly caught in between a bickering Kanan and Hera in the middle of a battle. “Art Attack” features Sabine flamboyantly getting the best out of some stormtroopers, while “Entanglement” has Zeb doing the same with considerably less grace. Finally, there’s “Property of Ezra Bridger”, which reveals where Ezra got the collectible TIE pilot helmet he alludes to during a later adventure with Zeb.

Star Wars Rebels: Complete Season One refreshingly emphasizes the word “complete.” You get the two-part movie that started it all, along with the subsequent 13 episodes, the four shorts that preceded all of it, and a really solid array of special features.

Most importantly, it’s all in service of a particularly lively entry in the Star Wars saga that has the potential to be even better. (For instance, it’ll be fun to see where characters like the Mandalorian Sabine wind up, given that this is our most famous Mandalorian acquaintance.)