When Calls The Heart: Heart And Home 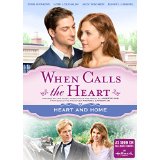 When Calls the Heart is a typical romantic drama series from the Hallmark channel, with forty-five minute episodes. This particular disc, When Calls the Heart: Heart and Home is a combination of episodes six and seven from season two. While combining the two episodes places this particular disc at feature length, it does not give context to what has happened to the characters in previous episodes. In other words: being introduced to this disc as a standalone movie, without prior knowledge of the television series, may not be the best way to watch it.

At this point in the story, Elizabeth Thatcher (Erin Krakow) must take a leave of absence from teaching in order to return home and tend to a family emergency. Thatcher’s sister, Julie (Charlotte Hegele) is involved in a car accident with her boyfriend, and her father is looking to press charges. In addition to this storyline there is an “intense” high-stakes poker game involving ownership of land, multiple rifts in relationships (including Elizabeth and her betrothed, Jack, played by Daniel Lissing), and multiple threats involving money/land disputes.

As you can see, there are an awful lot of conflicts happening here, none of which I was privy to as a first-time viewer. And of course, none of these conflicts are ever resolved, as the series continues into further episodes. Given the show’s rather high ratings on IMDb and my mild research into the show’s social media venues, I must say there is a rather impressive fan base. The show is family-friendly, so that may have a little to do with it. If I had been with these characters since the beginning of the series, I can see myself being compelled by the story; it is most certainly watchable.

Even though the storyline is rather inviting, despite its complicated web of character development, the visual content of the series is a bit off. The series is set in a Canadian mining town in 1910, which creates a bit of an issue: about fifty percent of the wardrobe does not blend into the time period. It looks as if the wardrobe department only had money to create a few accurate representations of the clothing in the early 1900’s, but when it came to minor characters they simply placed a somewhat elegant coat over top of blue-collar attire. While this doesn’t necessarily detract from the story, it’s something very noticeable to anyone with an eye for detail. Ultimately it becomes an eyesore.

Set designs also seem to suffer due to the production’s budget. Again, very little details, but definitely noticeable to anyone looking for details. For me personally, the story is not engaging enough to keep my attention. As a result, I see flaws, and I tend to exploit them. If you are a fan of romance and drama in a television series, this show will definitely give you what you are looking for, and it has a fan base to prove its worth. A lot of the dialog between characters is charming and playful, so it really does create a family-friendly environment. If you do decide to pick up this disc soon, and are new to the series, I suggest that you pick up the preceding episodes first. Because the show is still airing episodes, there will definitely be more discs to come!