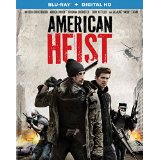 American Heist is an independent action flick that eventually nods to Michael Mann’s Heat and Sidney Lumet’s Dog Day Afternoon. (Along with Ben Affleck’s The Town, if you’re interested in a 21st century doppelganger.) However, the movie’s action-packed finale can’t completely disguise the fact that this is actually a dour family tragedy masquerading as a heist film. But if imitation is the sincerest form of flattery, at least the makers of American Heist know who to rip off flatter.

James Kelly (Hayden Christensen) is an ex-con trying to go legit; his big dream is to open his own auto repair shop. Those dreams get turned upside down when his older brother Frankie (Adrien Brody) is released from prison after 10 years. Frankie took the lion’s share of the rap for a crime the brothers committed together. Now Frankie is looking to James — an Iraq war veteran with a useful knowledge of explosives — to help him repay a debt to a pair of shady characters named Sugar and Ray (Akon, Tory Kittles), after they helped protect Frankie in prison. James gets an extra jolt of motivation when his former flame Emily (Jordana Brewster) re-enters the picture long enough to be threatened by Sugar and Ray. It all leads to the titular bank Heist, which is meant to give the brothers a fresh start. I don’t think it’s a spoiler to say that no one gets away clean.

American Heist is ostensibly based on 1959’s The Great St. Louis Bank Robbery starring Steve McQueen, even though it seems like the two films have little in common beyond their respective bank jobs. In fact, Heist — which clocks in at 95 minutes — doesn’t even start to totally feel like a bank robbery flick until around the one-hour mark. That’s around the time the movie’s surprisingly large-scale action centerpiece kicks off. (And the production might have bitten off more than it could chew; budgetary limitations result in a helicopter crash/explosion featuring some of the worst non-SyFy Channel CGI I’ve ever seen.)

The bank heist packs a solid punch, but the sequence is pretty derivative and somewhat clumsily staged. It’s also preceded by a mostly dreary drama about brotherly love that is livened only by Brody’s magnetic performance and an unexpected attempt at social commentary. American Heist is set in New Orleans, and director Sarik Andreasyan — working from a script by writer Raul Inglis — weave the city’s economic hardship into the plot. (Rather than just taking advantage of NOLA’s generous tax credits.) Ray, the gangster played by Kittles, is also an amateur philosopher who praises Thomas Jefferson, who famously said “banking institutions are more dangerous to our liberties than standing armies.” It’s a timely, intriguing notion; I’m just not sure if the movie actually believes/supports what Ray is spouting, since he is otherwise presented as a menacing, deplorable character.

That subplot might be a little murky, but at least it offers a diverting wrinkle to what is otherwise a predictable action-drama. The one intriguing wrinkle is Brody’s performance as Frankie, which reminded me of Christian Bale’s Oscar-winning work in The Fighter. Brody plays Frankie as a hollowed shell of a man desperately clinging to his last bit of swagger. (Insert snide comment here about Oscar winner Brody similarly fighting through an ocean of straight-to-DVD releases to claw his way back to respectability.) Of course, the most important part of playing this type of character is to also make him charismatic enough to believe that someone like James would get roped into helping him out. Brody gives Frankie a combination of flair and whipped-dog sympathy that makes him kind of irresistible, against James’s (and our) better judgment.

It’s a good thing too because Christensen, still trying to live down his mopey work in the Star Wars prequels, is once again saddled with playing a stiff. Obviously, James is much more of a straight man role than Frankie, but Christensen does little to make the character compelling or worth rooting for. Kittles, on the other hand, makes for a solid, poker-faced irritant, while R&B star Akon acquits himself well as an actor. I suppose we should also be grateful that the flirtation between Christensen and Brewster’s Emily — who happens to be a police dispatcher, solely to help set up a contrived ending for one character — isn’t nearly as painful as the time he ran game on Padme Amidala.

American Heist is presented in an aspect ratio of 2.40:1. The 1080p image is arrived at with an AVC MPEG-4 codec at an average of 31 mbps. This Blu-ray from Lionsgate offers an effectively gritty, downbeat presentation. The palette isn’t desaturated, per se, but it does manage to dull some of the brightness, which matches the idea that the life has been sort of sucked out of the Kelly brothers. There is terrifically sharp detail throughout, particularly in the dilapidated neighborhoods where James and Frankie hang out. Black levels are nice and deep, which comes in handy during the movie’s opening flashforward tease and early scenes at a dingy bar. There’s a bit of aliasing and banding, along with some more noticeable motion blur during the movie’s bigger special effect shots; I’d attribute that latter hiccup to the film’s relatively modest $10 million budget more than I would to this disc.

The DTS-HD Master Audio 5.1 predictably explodes into action during the big Heist. Gunshots zip from one speaker to the next, and the aforementioned explosion rocks the subs. However, there are signs of sonic life well before the main characters throw on their masks for the bank robbery. There is a nice sense of immersion throughout that stops well short of feeling intrusive. The hip hop cuts on the soundtrack (courtesy of Akon) feel a little aggressive compared to the rest of the audio elements, but they only occur sporadically. I wouldn’t call this a showoff piece for your sound system, but the track does do right by the action on screen.

Creating a Complex Caper — Pulling Off American Heist: (25:57) A relatively in-depth featurette with cast and crew talking about the film’s influences (Mann, Scorsese, films of the 1970s) and familial themes. (Christensen and director Sarik Andreasyan each collaborated with their brothers, who are credited as producers, for this film.) We get a behind-the-scenes look at the filming of the movie’s action sequences, but I was mostly amused by the fact that Andreasyan spoke zero English, which made communication with his cast and crew interesting. Presented in HD.

This is where I’m probably supposed to make that joke that “the only thing American Heist stole was 95 minutes of my life!”

But the truth is this movie isn’t quite that bad; it’s got pretty decent production values and at least one pretty strong performance. Unfortunately, those things are still not enough for me to recommend you go and give this one a look.

When Calls The Heart: Heart And Home The Visit