Posted in: No Huddle by Gino Sassani on September 14th, 2015 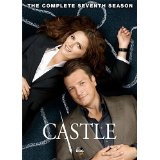 “Space, the final frontier. These are the voyages of Castle and Beckett. Their ongoing mission to explore strange new motives. To seek out new witnesses and new suspects for murder. To boldly go where…right over here.”

I know there are fans out there who take the show pretty seriously. The DVD’s aren’t the only way you can get into the show these days. Castle has become a world all on its own. You can now buy actual mystery books in the Heat series written by “Richard Castle”. There is a game and even a Marvel comic book series. Next thing you know they’ll be The Castle Experience at Disney World. This is an ABC/Disney property, after all.

Rick Castle (Fillion) is a very successful mystery pulp-fiction writer with over 26 books hitting the bestseller list. He’s rich, and he’s spoiled. He lives with his mother (Sullivan), who is pretty much a has-been actress who thinks she’s just one part away from stardom. He has a daughter (Quinn) who is more responsible than he is. After having so much fun and inspiration tracking down his fictional copycat killer, he decides to pull strings and become an unpaid consultant for the team. At first that wasn’t so good for team leader Detective Kate Beckett (Katic). Of course, now the whole sexual tension thing has been discarded, and they are an official couple these days and married. The team is also filled by a pair of detectives. Detective Javier Esposito is played by Jon Huertas and is the macho member of the team. Detective Kevin Ryan is played by Seamus Dever and is the more reserved member of the team, now trying to start a family. The team is led by the rough Captain Victoria Gates, played by Penny Johnson. She likes to think she’s in charge, but she’s not.

The seventh season of Castle picks up on what has to be the most action-packed cliffhanger the series has had in its previous six years. Castle is on his way to his wedding when he’s run off the road and apparently kidnapped, leaving Beckett and his family and friends waiting at the lavish alter. Fans had to wait an entire summer to find out what happened, and the powers that be aren’t going to let you off the hook quite yet.

It’s been months since Castle has been missing, and we see a montage of Beckett’s struggle to find him. She’s obviously obsessed with the case and becomes understandably worried that perhaps he got cold feet and ran. That feeling starts to really take hold when all of the evidence starts to point in just that direction. Video emerges of Castle arranging to have the SUV that allegedly kidnapped him crushed by a mobster friend. Other evidence begins to arrive that Castle is indeed safe and running. Once he is finally found adrift in the middle of the ocean in a small boat, we discover that two months of his memory are missing, and he doesn’t know anything about the evidence the team has uncovered. Apparently he’s been camping in a tent in the woods, and someone wants to hide what really happened. So, it’s a mystery, and you think you’re close to getting answers? Think again.

Castle discovers that he forgot intentionally and that it would be dangerous to pursue that missing time. He decides to let it go, and it won’t be until the season’s 20th episode that we’ll finally learn the truth. Honestly, I thought it was rather clever to put it aside and get back to the formula of the series with the mystery hanging over their heads. It would have been a mistake to draw this out in bits and pieces for an entire season. Shows like The Mentalist have taught us that there is such a thing as audience fatigue, and this show smartly avoids it by pushing it away without even looking into it during most of the season. Truthfully, I’d almost forgotten about the whole thing by the time it came up again.

While I applaud the idea, I have to say I think the answer is quite anti-climactic. It’s accepted far too easily and doesn’t really answer all of the questions. It’s my suspicion that we don’t really know the truth, and the show is holding on to a trump card for a future collection of episodes. That’s fine, just so long as they continue to avoid the temptation to milk it over too many episodes. I’d rather we just let it go until the next zinger comes along.

All of this is because the odd cases and the relationship between the characters are what makes this show what it is. Castle’s the kid in all of us, and he’s hoping that detective work will be like it is in the movies and on television…which, of course, it really is. So when he gets kicked out of the NYPD, he opens his own detective agency for a time. It’s a great transition from the big mystery and plays out just long enough for us to be longing for the old situation. I love that the show uses these kinds of show-changing devices but seems to know the point where it might get old and brings us back into familiar territory. It keeps the traditional stuff from getting too stale and allows us to return after these whimsical breaks in the routine. This is the kind of thing that can keep a show fresh for a long time.

There are a couple of standout episodes that are great just because they play into Castle’s child-like fantasies. In Last Action Hero, one of Castle’s action film idols from the 1980’s is killed. He was just about to be a part of a retro-style action film team-up movie in the style of The Expendables when he’s killed. Castle’s dreams come true when he’s invited by the team of action stars on a mission to obtain evidence to solve their friend’s murder. It’s straight out of an Expendables movie, and both Castle and the show’s fans live for stuff like this.

The Time Of Our Lives offers Castle a sort of It’s A Wonderful Life scenario. When he is holding a sacred Incan idol, he’s knocked out and wakes up in a world where Beckett doesn’t know who he is. He gets to see what his life might have been like if they hadn’t met. Of course, he manages to worm his way into the team anyway and solve a case for them.

The two part story Resurrection and Redemption plays out like a Castle greatest-hits episode. Two villains from past episodes are joined together and cause bad memories and intense emotions to flow. Remember the plastic surgeon Dr. Neiman, played by Annie Wersching? She made victims to look like members of the team, particularly an eerie version of Lanie. She’s back along with the Triple XK Killer who everyone thought was dead. Is he back, or is it another clever facial recreation by Neiman? That’s the question, and it leads to quite an explosive finish after playing some weird head games with Castle.

The best episode has to be The Wrong Stuff. Castle and Beckett investigate a dead astronaut on the surface of Mars. OK, it’s not really Mars, but it’s a closed simulation for candidates training for a 2018 mission to the Red Planet. The team has to wear spacesuits and act as though this really is a Mars mission. For Castle it’s the best case ever. I have to agree. Throw in a 2001 HAL imitation computer that tries to kill Castle, and it doesn’t get any better than this.

Lost fans will appreciate In Plane Sight. Castle and Alexis are heading to London so he can speak at the Sherlock Holmes society at a gathering at Holmes’s fiction house on Bleaker Street. Everyone knows that vacations don’t go well for television mystery characters. If you got on this plane, you might has well be wearing a red Starfleet shirt. Of course, the air marshal is found murdered, and Castle goes through the usual extensive list of suspects before getting to the truth. Oh, for the Lost fans, he’s on an Oceanic Air flight.

The season ends with no action cliffhanger but another job decision required by Beckett. You get 23 episodes on five discs. There are a few deleted scenes, a gag reel, a music video, and a couple of short behind-the-scenes feature, all tied up in a mystery bow for the fans. “One small murder for man, one giant mystery for mankind.”

Gino Sassani is a member of the Southeastern Film Critic's Association (SEFCA). He is a film and television critic based in Tampa, Florida. He's also the Senior Editor here at Upcomingdiscs. Gino started reviewing films in the early 1990's as a segment of his local television show Focus. He's an award-winning recording artist for Omega Records. Gino is currently working on his 8th album Merchants & Mercenaries. Gino took over Upcomingdiscs Dec 1, 2008. He works out of a home theater he calls The Reel World. Favorite films: The Godfather, The Godfather Part II, The Body Snatcher (Val Lewton film with Karloff and Lugosi, not the pod people film), Unforgiven, Gladiator, The Lion King, Jaws, Son Of Frankenstein, The Good, The Bad And The Ugly, and Monsters, Inc.
The Age Of Adaline (Blu-ray) Nightingale (Blu-ray)