The Age Of Adaline (Blu-ray)

Posted in: Disc Reviews by Jeremy Butler on September 14th, 2015 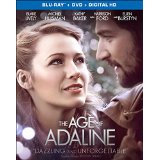 “All these years you’ve lived, but you’ve never had a life.”

Every woman’s fantasy: to remain young and beautiful forever. That is the fantasy, if I am not mistaken, correct? Well, women will be treated to the cost of said fantasy in The Age of Adaline, which shows the other side of the coin of the coveted fantasy. In my experience there are two fantasies that are popular among young ladies. The one mentioned above, and the opportunity to love, marry, and grow old with someone who loves them unconditionally. The Age of Adaline shows the latter is not possible with the former.

Blake Lively stars as Adaline Bowman, who led a relatively ordinary life until a car accident changed the course of her life drastically. In an explanation that proves academic beyond my understanding (not to mention the aforementioned principle behind such an act supposedly won’t be discovered until 2035), she does not age past her 29th year.

After a run-in with government officials who would have likely turned her into a science experiment to discover the secret to her immortality, Adaline has spent more than sixty years on the run, periodically changing her appearance and identity to avoid detection and protect those she loves, namely a daughter (briefly played by Cate Richardson and then Ellen Burstyn), who is the only person who knows her secret.

Through a series of flashbacks we glimpse the life Adaline has led, and the overriding theme is that it is a life of lonely solitude. Though she has the ability to experience more human history than anyone before her, she is unable to maintain a lasting connection with anyone due to her affliction. She meets, falls in love a couple of times; however, it is clear to the audience on Adaline’s face that the experience will be temporary, because as it is aptly said during the film, “she is not capable of change.”

Just weeks before her ritual identity change, Adaline meets Ellis (Michael Huisman, Game of Thrones), and despite her reservation about letting someone in, falls in love. Their first introduction is actually unique, and the two leads manage some mildly entertaining back-and-forth banter; however, in the long term the romance feels a bit manufactured. I don’t actually blame anyone’s individual performance for the lack, as they both do a decent job. Lively emanates the old-soul vibe through her speech and the way she carries herself, and Huisman manages to go against the average hunk stereotype by interjecting some actual wit and depth into the character. Unfortunately, however, the chemistry just wasn’t there for me. In truth, I saw more chemistry in the brief scenes exchanged between Lively and Harrison Ford, who portrays Ellis’s father, who also had a history with Adaline. (Can you say keeping it in the family?)

Age Of Adaline is presented in its original aspect ratio of 2.40:1. The 1080p image is arrived at with an AVC MPEG-4 codec at an average 35 mbps. There’s a lot of use of style in the high-definition image presentation. The film takes place over eight decades, and there is a nice deliberate use of an approximation of the kind of film stock used in that era. It gives us the feel that we’re seeing something that was made over 80 years. There’s plenty of sharpness and detail to be found along the way. Black levels are a bit above average when the image isn’t intentionally soft. There’s a clever use of color temperature here to achieve those era looks.

The Dolby Atamos audio presentation translates to a 7.1 standard if you do not have the multi-speaker configuration. That doesn’t make this a very aggressive film when it comes to the surrounds. It’s all very dialog-heavy with music cues used mostly to build up an atmosphere for the story. It’s here that you get the traces of surround mix that fill in the field for you. Subs have their moments, but this is overall a quiet film with a serene nature to it all.

A Love Story For The Ages: (29:38) Cast and crew offer the traditional insights, but this one is mostly from a crew perspective. There are far too many clips to pad the running time here.

Style Throughout The Ages: (18:19) This feature focuses on the various ways the film depicted the various eras in time. This is all about production design, costumes and props.

Discovering Young Harrison Ford – Anthony Ingruber A You-Tube Sensation: (8:19) The young actor made an internet name for himself by capitalizing on his looking very much like a young Harrison Ford. It’s actually good casting, and the kid is pretty much more a natural than I would have guessed.

Deleted Scenes: (4:24) There are only two with no individual selection ability.

The story does a good job of remaining interesting enough to keep my attention. It even manages to provide a satisfactory amount of quips and genuine humor to keep it from becoming too much of a romance story. I wouldn’t it call it your stereotypical romance story; however, it is predictable in some areas. I may lose some dates for saying this, but I personally would have preferred a slightly different ending than the one I got. Perhaps a little more struggle during the climax or a bolder declaration of love; the declaration just felt like it was pulled out of the romantic declaration template folder. I just would have like to see something that didn’t quite fit into a Hallmark bow. Or even a twist that suggests a more eternal happily ever after. All things considered, I’m sure the target audience with be satisfied with The Age of Adaline as a whole.

Jeremy Butler is a film school graduate of the International Academy of Design and Technology. He is been writing for Upcomingdiscs since 2012; however, movies have played a big part of his life for much longer. Favorite genres include horror, science fiction/fantasy, and comedy. Favorite movies are V for Vendetta, Boondocks Saints, Kiss Kiss Bang Bang, and The Godfather.
Peanuts: The EMMY Honored Collection Castle: Season 7