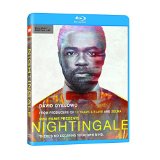 “He is a confused and tortured young man…”

The “he” in this case is Peter Snowden, a chatty, charismatic, and deeply troubled war veteran. “He” also happens to be the only character who appears on screen in Nightingale, a potentially-fascinating HBO Films experiment that doesn’t quite reach its potential. At least, “he” is played by Selma star David Oyelowo in what is a thoroughly mesmerizing performance.

It’s hard to talk about the “plot” of Nightingale for a variety of reasons. First off, since Peter (Oyelowo) is the only character in the story and he largely remains in the same location — the modest house he shares with his unseen mother — there’s not a heck of a lot to synopsize. Secondly, the incident that sets the story into motion has already occurred by the time the film begins.

So while you can argue that I wouldn’t be giving anything away by mentioning the Very Bad Thing Peter does that provokes his monumental (emphasis on “mental”) breakdown, I’d rather not undermine the way Nightingale’s story gradually unfolds. The main thrust is that Peter wants to have a beloved war buddy named Edward over for a nice dinner, but a variety of forces — Peter’s mother, Edward’s wife, the fact that Peter and Edward’s relationship might be either embellished or entirely in Peter’s head — conspire against him.

On the surface, the idea behind Nightingale is to portray and dramatize the psychological unraveling of a disturbed individual. The problem is that Peter is already very clearly unraveled when we meet him. It’s a provocative place for director Elliott Lester and writer Frederick Mensch to begin their story — Nightingale basically starts right after what would normally be the climax — but it doesn’t make for the most dynamic dramatic presentation. Of course, the intention here may not even involve presenting a traditional “arc”, but it does make a lot of what we see feel repetitive. (There are only so many ways Peter can keep his nosy sister and neighbors from intruding on the world he has created inside the house.)

Speaking of the world Peter inhabits, I also wish Lester had chosen a more consistent and coherent visual presentation. There are some neat stylistic touches here — all the dynamism missing from the story is present in the askew angles and other interesting visual touches — but the overall presentation feels a little muddled. Sometimes we get a traditionally cinematic look at Peter, while other times we get a found footage-style perspective from his iPhone or web camera. While I get the notion that Peter needs *some* reason to be talking — we also see him converse on the phone, as well as read letters and other messages aloud — it often feels like too much contrived work to advance a story that isn’t really going anywhere that quickly.

I do like that Nightingale doesn’t shy away from the dark humor in Peter’s predicament. (I particularly enjoyed seeing him flip out when he tries to order an espresso machine over the phone.) The film is also insightful enough to include moments that capture the kinds of things people do when they’re alone in their house for long stretches of time, like (over)rehearse a phone conversation and belt out parts of a Cole Porter tune. (Ok, maybe that second one is just me.) However, the film left me wishing I had a better handle on what kind of crazy person Peter is. On one hand, he’s unstable enough to commit the Very Bad Thing and carry on with his life as if it never happened, yet he’s also crafty enough to lie to people and conceal his actions out of a sense of self-preservation. Perhaps the whole point is that it’s impossible to get a handle on this sort of behavior, but it makes for an unsatisfyingly disconcerting viewing experience.

Thankfully, that blow is somewhat softened by Oyelowo’s phenomenally captivating performance. His work here is a revelation for anyone who has only seen him as a humorless heavy in Hollywood movies like Jack Reacher and Rise of the Planet of the Apes, or from his Selma breakout. (Which I, admittedly, didn’t warm up to until that film’s second half.) Oyelowo is equally adept at playing the tragedy and comedy of his predicament in what is a fantastically unselfconscious performance.

But regardless of how consistently riveting Oyelowo is, Nightingale — which has a slim 82-minute running time — still gets somewhat tiresome in a hurry.

Nightingale is presented in its original aspect ratio of 1.78:1. The 1080p image is arrived at with an AVC MPEG-4 codec at an average of 27 mbps. There is some intentionally lo-fi webcam footage mixed in with the naturalistic baseline image, which has some grit and muted colors that suit Peter’s shabby surroundings (The house in which the film is set feels a bit frozen in time.) There is fantastic fine detail on the many close-ups of Oyelowo, and the deep black levels offer nice separation during nighttime scenes. I also appreciated the subtle switch to a full-screen aspect ratio during the coda featuring older home video footage. This is quite a strong HD presentation, even if it doesn’t quite dazzle by HBO’s usually sky-high standards.

The DTS-HD Master Audio 5.1 track is, as you can imagine, heavy on the dialogue monologue. The subs only rumble to life occasionally courtesy of Mark D. Todd’s mournful score, but even then it feels like too much of a room-rattling intrusion. Otherwise, there’s not a ton in the way of rear channel activity or directionality, which is to be expected from a film set almost entirely indoors.

This weekend, Nightingale will vie for the Outstanding Television Movie and Outstanding Lead Actor in a Limited Series or Movie awards at the Emmys, with Oyelowo standing an excellent chance at capturing the latter.

I probably didn’t like the overall movie as much as other people, and I suspect you’ll enjoy it more if you think of it as an 82-minute look-in on a crazy person. (Rather than expecting some mind-blowing twist or a dramatic meltdown; although Oyelowo pitches a pretty epic fit at one point.)

I’m disappointed that there are zero special features on this release. I would’ve been interested in hearing the filmmakers’ insight on some of the choices they made, and I definitely would’ve enjoyed hearing Oyelowo talk about this particular acting challenge.

Although I have my issues with the film, it’s definitely worth a look just to see Oyelowo’s incredible performance.