The Maze Runner – The Scorch Trials

Posted in: The Reel World by Archive Authors on September 18th, 2015 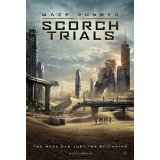 Maze Runner: The Scorch Trials causes a great deal of confusion for me. First, I have to figure out how it is different from two other YA (Young Adult) phenomenons, Divergent and The Hunger Games. It’s not that it’s that hard to tell the difference between them, but there are so many nagging similarities for me that watching the three series in succession would become a difficult experience. It doesn’t help that Maze Runner II has so many tropes from so many different movies that it is somewhat overwhelming. More than overwhelming, it is absolutely confusing. Adding to the confusion, this new installment of Maze Runner no longer has a maze.

In the first film, our young protagonists were trapped in an isolated meadow surrounded by gigantic walls. The walls could be mechanically manipulated to allow access to deep mazes. By the end of the first film, many of the clueless teenagers had escaped out into a barren and harrowing dystopian landscape. That’s where the second film picks up. It is derived from a series of books which promise future editions such as The Death Cure, The Kill Order, and The Fever Code.

Without revealing too much of the plot of the new film, I will say that plot devices come in rapid succession as the young group find themselves nearly constantly on the run. Early on they are brought into a secure facility, but that is only a brief respite. The film is a relentless series of dangers, tests, obstacles, and battles.

Our two main characters are Thomas (Dylan O’Brien) and Teresa (Kaya Scodelario) from the first film along with their buddies, Newt and Minho. If you are looking for a name, it would be Patricia Clarkson, who is playing the Kate Winslet role here (one of the many similarities to Divergent including a very similar decimated cityscape and desert-like endless horizon). A number of actors with high profiles have been added this time around including Giancarlo Esposito (Breaking Bad), Aidan Gillen (Game of Thrones), Nathalie Emmanuel (Game of Thrones), Barry Pepper (Saving Private Ryan, The Green Mile), Alan Tudyk (Serenity, Rogue One: A Star Wars Story) and Lillie Taylor (The Conjuring, Mystic Pizza).

The first film was all about revealing the mystery and disorientation the teenagers had to face. The second film is about piling on action sequences and multiple additional layers of plot. It will be much easier for fans of the books to understand and identify with what is happening. If you are going in cold, you might have difficulty coping with the flurry of activity that is presented with minimal clarity. The first film primarily took place in one setting. The second film jumps to new locations and characters four times. There is something of a generic quality to the constant plot shifts. There are a couple of moments of major twists, but they almost get lost in the general frantic business.

I probably think The Hunger Games and Divergent series are too generic as well. They are so clearly created as product to fill a need in the youth market; there is definitely a palpable market. All these films have been successful in an attempt to fill the void of previous series like Harry Potter and Twilight. I think The Hunger Games, so far, has been the most successful at producing intelligent, quality entertainment.

Over all, The Scorch Trials is entertaining, but I think if the producers are to continue with the series, they need to focus more clearly on the characters and less on a blur of activity. Right now it’s coming close to being a trial for the audience.