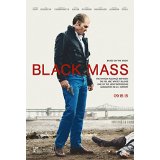 “Before we start, I want you to know something…I’m not a rat.”

I could get into *a lot* of trouble if anybody found out I was talking to you. After all, there is absolutely, positively nothing worse than a rat, a point that is made crystal clear in Black Mass. But I’m putting my neck on the line here because I figured you’d want to know this fact-based crime drama marks the welcome return of Johnny Depp, who has spent the better part of the past decade in the Magic Kingdom loony wilderness.

You probably know that Black Mass is the story of James “Whitey” Bulger. (We learn early on that Bulger doesn’t much care for his famous nickname; he prefers “Jimmy.”) By the time we meet him in 1975, Bulger is already the leader of South Boston’s Winter Hill gang, where he is backed by brutal blockheads like Steve Flemmi (Rory Cochrane), John Martorano (W. Earl Brown), and newest recruit Kevin Weeks (Jesse Plemons, looking as paunchy and rubber-faced as a “Dick Tracy” villain). Black Mass depicts Bulger’s family life — his younger brother Billy (Benedict Cumberbatch) is a powerful and popular state senator, and Jimmy also dotes on his young son with Lindsey Cyr (Dakota Johnson) — and traces his rise toward becoming one of the most notorious mobsters in modern U.S. history. You might also know that Bulger spent more than a decade as an FBI informant.

“The next thing you know he’s a damn kingpin. You know why? Because the FBI let it happen.”

What you might not know is that Black Mass is also the story of FBI agent John Connolly (Joel Edgerton). A Southie himself, Connolly convinces his superior (Kevin Bacon) and colleagues (played by the likes of David Harbour and Adam Scott) to let him exploit his past ties to Bulger. The idea is that Bulger would share his knowledge of the criminal underworld and help the FBI eradicate the Italian mafia, led by the Angiulo family, in South Boston. In exchange, Bulger’s status as an informant gives him protection from the FBI that allows him to further his own criminal empire. It proves to be a mutually beneficial relationship, as Connolly’s own star rises among the ranks of the FBI. Unfortunately, Bulger and his gang inevitably begin dropping too many bodies for the authorities to ignore.

“It’s not what you do, it’s when and where you do it, and who you do it to or with. If nobody sees it, it didn’t happen.”

Director Scott Cooper (Crazy Heart, Out of the Furnace) and screenwriters Mark Mallouk and Jez Butterworth hammer home the point that being labeled a “rat” is the worst of all possible outcomes for a crook. (Murder, along with other forms of violence and intimidation, are a distant second; Jimmy amusingly insists he’s not an FBI informant, and that his relationship with Connolly is an “alliance.”) As a result, the filmmakers have done a clever, ironic thing: the story of Black Mass is essentially told by rats. There are various interrogation room confessionals by the likes of Weeks, Flemmi, and Martorano, and the film itself is based on the book “Black Mass: Whitey Bulger, the FBI, and a Devil’s Deal” by journalists Dick Lehr and Gerard O’Neill. The latter duo appear as characters toward the end of the film to hear the confession of a stressed-out FBI agent.

Then again, this choice in POV leaves us a little detached from the man at the center of it all. The Bulger in Black Mass is already a fully-formed monster who is a hardened criminal by night, yet allows his mother to beat him at gin during the day. We don’t get much backstory or a sense of what makes him tick, but those shortcomings are offset by Depp’s performance, which is easily the most riveting work he’s done in more than a decade. (Jack Nicholson played a fictionalized version of Bulger in The Departed.) With his dangerously slicked-back hair and off-puttingly clear eyes, you could make a case that Depp is being as just as indulgent here as he was when he put a bird on his head. The difference for me is that Depp — with his deep, deliberate, perfectly-modulated speaking voice — seems much more focused this time around. Most importantly, he appears to be performing to service the character and the story…as opposed to performing mostly to amuse himself.

In fact, Depp looks otherworldly to the point that I didn’t really buy him being related Cumberbatch’s Billy. (Or being related to any human being, for that matter.) Other than a vaguely reptilian quality, the actors don’t make a ton of sense together as siblings, but Cumberbatch’s intelligent charm carries the day in most of his scenes. Unlike the most notable pair of Boston crime dramas that Black Mass will be compared to (The Departed and The Town), there’s not a ton of homegrown Massachussetts talent. (The Departed had Matt Damon and Mark Wahlberg in key roles, and The Town was directed and curated by Ben Affleck.) Obviously that doesn’t totally matter when you’ve got a troupe of supremely talented performers. But there is a perceptible whiff of some of these actors (Edgerton is an Aussie, Cumberbatch is a Brit) throwing on wigs, ’70s suits, and a Bahston accent to play parts that don’t feel fully authentic. (Thankfully, no one goes “full-Kennedy” with their accent.)

That being said, I thoroughly enjoyed Edgerton’s strutting, peacocking performance as Connolly. The act that Connolly puts on for his superiors turns into flop sweat when things start to sour. The rest of the cast is like we’ve all died and gone to character actor heaven. Absolutely *everyone* is in this movie. (Well, almost.) Peter Sarsgaard’s accent may not be totally believable as an ill-fated associate of Bulger’s, but his desperation sure is. Corey Stoll (The Strain, Ant-Man) also pops up late in the game as a dogged, humorless U.S. Attorney who is the temperamental opposite of Connolly’s. (I wish he’d been allowed to do more.) On the robbers side, Cochrane does more effective work with his wounded facial expressions than he does whenever Flemmi speaks. It’s not a shock to find that female characters don’t play much of a prominent part. Johnson’s character is abruptly tossed aside after a tragic loss, but at least Julianne Nicholson is allowed to bring some caustic bite to her role as Connolly’s increasingly bitter wife.

I also appreciated Harbour’s pained, conflicted work in a relatively minor role. Harbour is on the wrong end of what is arguably the movie’s best scene: Bulger grills Harbour’s FBI agent about a “family secret.” Then again, that moment could also be seen as a karaoke version of the immortal “Funny like I’m a clown?” scene from Goodfellas, which arrived in theaters exactly 25 years ago today. Cooper comes up with a handful of impactful, gut-punch sequences — the best of which involves Bulger choking the life out of a liability while a pair of his henchmen look on — but as much as I liked Black Mass, I doubt we’ll be marking its anniversary 25 years from now.

Of course, there are infinitely more egregious offenses than “not being as good as Goodfellas.” (Like ratting somebody out.) Either way, I have to confess: Black Mass is a gritty, entertaining telling of a fascinating true story and one of the better movies I’ve seen this year.