Posted in: Disc Reviews by Gino Sassani on September 18th, 2015 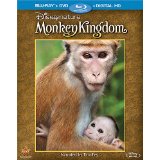 “The wilds of Sri Lanka, land of myth and legend where rocky pinnacles overlook cast tropical forests. And an abandoned city lies shrouded in the jungle. The kings who once reigned here are long gone. These days, there’s a new dynasty in residence. But this one is governed by the law of the jungle.”

From such a majestic intro told against a backdrop of beautiful vistas we find our tranquility broken by an invasion of primates rushing across the landscape to the voice of Micky Dolenz singing the theme song to the 1960’s comedy classic The Monkees. Hey, Hey, it’s Disney Nature’s latest adventure into the life of a family of animals. Enter Monkey Kingdom.

Meet Maya, a toque macaque monkey living in the jungles of Asia. With her newborn son Kip, she must find a way to survive from the bottom of her troop’s hierarchy and provide for her son with little help from her 50 troop members. Maya mated with a monkey that was not from her troop, and when the troop is displaced from their prime location, it is her mate who returns to lead the troop back to their lavish home with Maya now on the top of the hierarchy.

The film works very much like the previous Bears movie worked. We have an animal mother whom we follow for a period of time to witness their struggles and habits. The crew spent years filming in the area and captured some pretty remarkable and intimate moments among the monkeys. There is the expected stunning footage of the locations that feature ancient human ruins amid a thick and lush jungle.

Some of the best moments reveal a termite swarm that happens for only a few hours every year. The sky is littered with the flying insects, which serve as quite the food bounty for the monkeys. The shots look almost as if they could have been computer-generated with the sheer number of the insects. The monkeys certainly feast, grabbing them out of the sky almost like they were reaching for beer nuts or pretzels at a bar. No hunting or chasing is required here.

When the monkeys are driven out, we see them interact with the local human population. There’s a particularly amusing scene of the monkeys raiding a kid’s birthday party; while the humans are outside they break into the house and get into everything including the inevitable destruction of the birthday cake.

It’s a nice whimsical journey that works for the entire family. The only flaw or weak link comes in the narration. Tina Fey is horribly miscast in the narrator role. It’s written a little too cute at times, but she manages to make it sound irrelevant throughout. There’s certainly no authority to her narration, and honestly, her voice tends to grate after a short time. An unfortunate distraction for what is otherwise a very nice nature presentation.

Monkey Kingdon is presented in its original aspect ratio of 1.85:1. The 1080p image is arrived at with an AVC MPEG-4 codec at an average 30 35 mbps. The photography is nothing short of amazing. These cameramen managed to get close to the monkeys and still capture their routine moments. The high-definition image provides excellent detail and sharpness. This is about as close as you’re ever going to get to this kind of action. Colors are brilliant, revealing lush greens of the jungles in nice subtle shades. The monkeys themselves look fantastic in even the tightest of close-up shots. Black levels aren’t so vital here, but they are solid nonetheless.

The DTS-HD Master Audio 5.1 is pretty much there to serve the under-par narration. The surrounds do a fine job of bringing us a little closer to the environments, but nothing so aggressive to distract from the images. It’s all clean and crystal clear.

Tales From The Kingdom: (12:11) A nice close look at the camera crew and their methods to get these shots. Plenty of behind-the-scenes footage that shows a quite jolly crew enjoying what they’re doing.

On Set With Jane Goodall and Wolfgang Dittus: (5:49) Dittus welcomes Goodall for a visit at the shooting locations. She’s known for her lifetime work with apes and offers her thoughts on what’s being done here.

The Conservation Study: (7:53) Basically a PSA.

A Special Thank You From Disney Nature: (2:14) Another PSA piece.

Disney Nature has developed a somewhat clever style for these nature documentaries. There’s some of the Disney penchant for creating characters without interfering in the natural footage. It’s a rather nice way to keep the attention of the youngsters by providing a story and giving the participating animals names. It’s worked before, and it looks like this won’t be the last of those kinds of Disney Nature films. Because of this approach, there’s one thing I can guarantee you about these monkeys. “You will remember them.”

Gino Sassani is a member of the Southeastern Film Critic's Association (SEFCA). He is a film and television critic based in Tampa, Florida. He's also the Senior Editor here at Upcomingdiscs. Gino started reviewing films in the early 1990's as a segment of his local television show Focus. He's an award-winning recording artist for Omega Records. Gino is currently working on his 8th album Merchants & Mercenaries. Gino took over Upcomingdiscs Dec 1, 2008. He works out of a home theater he calls The Reel World. Favorite films: The Godfather, The Godfather Part II, The Body Snatcher (Val Lewton film with Karloff and Lugosi, not the pod people film), Unforgiven, Gladiator, The Lion King, Jaws, Son Of Frankenstein, The Good, The Bad And The Ugly, and Monsters, Inc.
CSI: Crime Scene Investigation – The Final Season The Maze Runner – The Scorch Trials