The Jinx: The Life and Deaths of Robert Durst (Blu-ray) 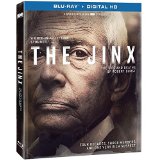 If ever a show were more aptly named, it would have to be HBO’s The Jinx. It’s a documentary on Robert Durst, who had been charged with three murders and never convicted. The title comes from his own description of why he never had any children. He believed he would be a jinx to any child as a father. It turns out that this HBO series would be a jinx for Durst himself, because he couldn’t quite keep his mouth shut and ends up making potentially incriminating statements. The suspect was arrested just hours before the last episode of the show aired on HBO. We might have to get into the whole art-imitating-life-imitating-art conversation. One thing is certain. This show had an impact on the real world like few shows ever had. But that’s not the only reason I’m going to tell you that you simply must see The Jinx out on Blu-ray from HBO.

It begins like something out of Dexter. In Galveston, Texas, a grisly discovery is made. There are body parts washing in from the bay in garbage bags. Eventually an entire body is discovered except for the head. The evidence leads to the victim’s next-door neighbor Robert Durst, who had been staying there disguised as a woman. An arrest is quickly made, and it looks like a slam-dunk conviction. But this seemingly poor man posts a $250,000 bond the very next morning and takes flight.

From there we learn that Robert Durst belongs to one of New York’s wealthiest real estate families. He left the family business when he was passed over to run it for his younger brother. He still had plenty of the family money. This also wasn’t the first time he was a murder suspect. His wife went missing in the early 1980’s and was never seen or heard from again. While Durst was caught in a plethora of lies, he was never charged with that murder. Later when that investigation is reopened one of his long-time friends, Susan Berman in L.A., was scheduled to talk to New York investigators. She was found murdered before she could have that conversation. It didn’t take long for Durst to become a suspect in that crime. Now he’s suspected of three murders in three decades.

Durst is finally caught because of his own stupidity or desire to actually be caught. Texas gets their trial, and as if by magic he’s found not guilty of a murder he claims he committed in self-defense, of course dismembering the victim and throwing him into the bay. It’s somewhat of a shocking verdict which is made more so when the second episode delivers much of the actual filmed trial. You’ll be scratching your head on this one.

You’d think that Durst would accept the close call and just lay low. Instead he contacts film director Andrew Jarecki, who released a fictionalized version of the Durst missing-wife story in a movie called All Good Things. Durst contacts him and sets up what would be the driving force behind this documentary series. He wants to be interviewed and tell his side of the story. Jarecki agrees, and The Jinx is born.

The episodes attempt to focus on a particular part of the story. The material consists of archive news footage, interviews with participants, home movies and stills, along with Durst giving his own accounts in the interviews. He appears the kind of guy who isn’t all there. He easily admits to telling lies throughout to investigators. He offers convoluted reasons for the lies, and it’s hard for me to believe that a jury bought any of it. Stranger yet, at least one of the jurors is still convinced that the investigators are merely out to get Durst. I suspect some money changed hands. One of his friends, who supported him admitted to be offered $100,000 “for college” after trying to extort $250,000.

Finally, the documentary team stumbles upon some rather incriminating evidence. The Berman killer had sent police a short letter telling them they could find a “cadaver” at Berman’s address. When Jarecki looked at that letter and one that Durst sent to Berman, the similarities were quite striking, from the way letters were made to the fact that both misspelled Beverly in Beverly Hills the same way. The final episode follows the filmmakers as they have handwriting analysis done on the samples and prepare to confront Durst with what they’ve found. But the real climax doesn’t come with the confrontation. Durst remains calm and offers his own take on the similarities. It’s what he says in the restroom while still carrying a hot mic that might just get him in trouble.

You can see the editorial slant change throughout. This is filmmaking on the fly. Jarecki appears to be actually very taken with Durst at first. I think he’s beginning to have his own doubts about the story. I think he was somewhat disarmed by Durst, who doesn’t strike you as a guy who could have killed three people. As time goes on and the evidence mounts, you can see the editorial slant moving more toward the possibility that Durst is guilty. By the last episode there is no doubt, and Jarecki is actively planning an ambush with the writing-sample evidence. There’s a very real journey here that no one could have scripted any better than it plays out.

The series is perfection in pacing. Any less episodes and you would feel like you were missing something. Any more and it would feel padded. Instead the story remains compelling just as it is. I took it all in in one sitting on a Friday afternoon. If you have the chance to do something like that, I suggest you give it a try. You won’t be disappointed.

Each episode is presented in its original broadcast aspect ratio of 1.78:1. The 1080p image is arrived at with an AVC MPEG-4 codec. This is mostly vintage material, so there is not going to be any real consistency in the high-definition image. Some of it is quite rough owing to the source material. That’s the nature of this kind of series. You’re not in it for the video quality. The stuff shot for the film which includes visits to important scenes and the interviews is perfect quality. It looks natural and clean.

The DTS-HD Master Audio 5.1 is not going to turn any heads. This is strictly dialog, and that’s all you need here. You can hear what is being said with perfect clarity, and that works for me.

I’m disappointed that there are no extra features or at least a commentary track here. Obviously there is a lot to say about what has happened since the first broadcast of this series. It’s possible that the current legal situation with Durst requires they not elaborate on the details of what followed. Perhaps a season 2 or a follow-up release will fill in those remaining blanks. Of course, there is now more to the story developing as the new case makes its way through the courts. I have a feeling Jarecki isn’t going to abandon this project just yet. That means we should remain tuned. My colleague here, John has the release of All Good Things, and he reports there is a commentary with both Jarecki and Durst that has Durst making some wild comments. Needless to say I am planning to continue my own exposure to the story by borrowing that title. It’s tough to predict where it all goes from here. It’s a real life cliffhanger, because “Nothing happens the way it’s supposed to with Robert Durst”.

Gino Sassani is a member of the Southeastern Film Critic's Association (SEFCA). He is a film and television critic based in Tampa, Florida. He's also the Senior Editor here at Upcomingdiscs. Gino started reviewing films in the early 1990's as a segment of his local television show Focus. He's an award-winning recording artist for Omega Records. Gino is currently working on his 8th album Merchants & Mercenaries. Gino took over Upcomingdiscs Dec 1, 2008. He works out of a home theater he calls The Reel World. Favorite films: The Godfather, The Godfather Part II, The Body Snatcher (Val Lewton film with Karloff and Lugosi, not the pod people film), Unforgiven, Gladiator, The Lion King, Jaws, Son Of Frankenstein, The Good, The Bad And The Ugly, and Monsters, Inc.
Big Bang Theory: Season 8 (Blu-ray) Pop Life