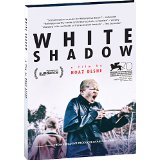 Yet another film from the Sundance Film Festival has been distributed to Upcomingdiscs headquarters. Noaz Deshe’s White Shadow was nominated for the World Cinema Grand Jury Prize in the “Dramatic” category, and while it didn’t win, it is very easy to see why this film is a strong contender. The film is beautifully shot and edited, paying a lot of attention to lighting and color. White Shadow tells the story of Alias, a young albino boy living in Tanzania, who must flee his home after the murder of his father. There is a danger to all albinos in the area as a local witch doctor harvests their organs for his various potions. His mother sends him to live with her brother in the city, but Alias soon learns trouble follows him everywhere he goes.

Noaz Deshe really created a name for himself as an auteur with this film. He is credited as director, writer, cinematographer, editor, and composer. While he did work with a team of people, the quality of the film produced by a man taking on that much responsibility is commendable. Deshe is truly a passionate artist when it comes to filmmaking. That being said, the story does drag a little bit, but overall the film is such a treat for the eyes that a slow story can be overlooked.

While researching this film, I found pictures of Deshe filming scenes with a Canon DSLR camera, which is absolutely incredible. If Deshe primarily used a DSLR camera to film, the visuals he is able to pull off are absolutely breathtaking.  The colors and tones in this film alone are enough to impress,  from wardrobe choice, to the vibrant colors in the marketplace, to the environment either blending or contrasting with Alias’s unique skin tone. Having used DSLR cameras myself, I can appreciate the amount of care that went into making these images so attractive.

One scene in particular is worth watching for visuals alone: the night chase sequence. It begins with a group of men searching for Alias in a nightclub. Every few moments we are in the club, the color shifts from red to green, from green to violet, and so on. While we are in the club the camera movement is slow yet disorienting, creating an interesting, almost nauseating, visual that you cannot look away from. I will argue that it is on par with the nightclub scene from Alejandro González Iñárritu’s Babel, which exercises similar color techniques, but primarily uses editing as the source of disorientation.

As the scene progresses Alias flees the club and loses his shirt, exposing his bright skin tones. In the darkness, a cool light bounces off of Alias, making him eerily luminescent. Alias attempts to mute the brightness of his skin by rubbing as much mud into his skin as he possibly can before running off one more time. The scene culminates with Alias being chased into the dark water, where his face maintains the eerie luminescence until he finally is able to swim to safety. My words barely do any of these visuals any justice. I have never seen anything quite like this, and Deshe must really know his camera inside and out in order to provide us with such striking imagery.

After screening White Shadow, Noaz Deshe is a new addition to the list of contemporary auteurs I’m paying attention to. I look forward to his future projects as he takes great care to be a part of every aspect of his craft. I always love it when filmmaker not only has a vision, but also embodies that vision until he has a final product. So yes, the story is a bit slow in some areas, but I believe Deshe is an artist that will evolve with each film he produces.