Posted in: Disc Reviews by Gino Sassani on October 1st, 2015 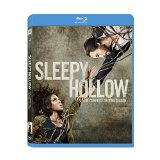 “My name is Ichabod Crane. In 1781 I died on the battlefield, but I was saved by a mysterious spell cast upon me by my wife Katrina. Now I’ve been reawakened 250 years later in a land I no longer recognize. And fate has led me to Miss Abigail Mills., a young police lieutenant. Investigating baffling mysteries, our real mission is in danger, and the apocalypse may be upon us, our destinies entwined.”

Fans of the tale The Legend Of Sleepy Hollow will recall that Ichabod came to encounter the headless horseman in one of the first American horror tales ever written. Irving was a contemporary of our founding fathers, including another Washington who happened to play a big part in a little skirmish with the Brits that came to be known as the American Revolution here and the Great Colonial Rebellion over there. Thanks to the new series Sleepy Hollow, we discover that the British weren’t the only ones we were fighting. It’s a story of independence we hadn’t heard before. It’s a fresh take on an old idea that dates back to Kolchak: The Night Stalker. The second season is out on Blu-ray now, and I recommend you check it out. Just don’t mix it up with that American history text. We history teachers frown on that kind of thing, you know.

The last season saw Ichabod (Mison) once again buried inside of a box and Abby (Beharie) stuck in Purgatory. All of this at the hands of Ichabod and Katrina’s (Winter) son Henry (Noble). Henry is working for the demon Moloch (Mears), who intends to bring about the end of days. The Headless Horseman has become the Horseman of Death, while Henry takes on the role of the Horseman Of War. We know that the pair will free themselves from their traps, but that really is just the beginning of a second season filled with twists and turns and intrigue like you have not seen to date.

Most of the season finds Crane and Abby working to fight the various demons and spells Henry provides to bring Moloch into the world. They include restless spirits, a succubus, a windego, and various hell-spawn demons. The “Scooby Gang” as also expanded. Jenny (Greenwood) is Abby’s sister and is now a full member of the team. They also join forces with newcomer Nick Hawley (Barr). He’s one of those con artists who has a knack for procuring rare items for people. He’s up on his demon lore, and he sometimes works with the team, while other times he’s really just working for himself. Trust will be the key issue here for Hawley. He’s also an old friend of Jenny’s and apparently an on/off again lover.

Katrina has been captive of the Horseman, and she wears an enchanted amulet that allows her to see him in his human form of Abraham. That’s a pleasant turn of events for actor Neil Jackson, who gets to be in the show longer. You might recall he was engaged to Katrina and was Ichabod’s best friend before Ichabod married Katrina. That makes them rivals beyond the whole apocalypse thing. It’s hard for Crane to trust her when she elects to remain willingly with him to spy out their plans. Henry and Abraham hope to perform a sort of wedding ceremony for Katrina and Abraham. When that fails, she is impregnated with Moloch and becomes her proxy child.

We also find that former Captain Frank Irving, named for the material’s original author, is stuck in an insane ward where Henry has agreed to act on his behalf. It’s deal-with-the-devil stuff that puts Frank’s soul in jeopardy. He will be both a good guy and bad guy throughout the season.

The season is certainly about family. Henry feels betrayed by his own parents, thus putting him in Moloch’s corner. The relationship between Crane and Katrina is changing, and that’s leading to a season finale that brings Abby into the past where she must convince that Ichabod Crane of who she is and stop Katrina from killing him.

We get a peek into Abby’s family when her mother’s spirit takes center stage. We learn that Mom always knew Abby’s status as a witness, as did her family for generations.

One of the more interesting encounters is the Angel Orion. His halo is a pretty sweet battle blade, and there are serious question about his motives. Abby has a miniature version of the blade that can be used to summon him. I suspect he’s being built up for a much larger role in the future. He’s used in two small bits here which don’t seem to account for his buildup at all.

The show has a nice distinctive style and atmosphere. The original story places Sleepy Hollow in New England, but here we’re somewhere in rural New York. The style looks a lot like that of the Underworld films, and that isn’t at all surprising. One of the show’s executive producers and director of the pilot episode is Len Wiseman, who also created the Underworld universe. There’s a lot of that cold light and blue tint to the film. There’s a bit of diverse talent in the production team. It includes Ken Olin, who is more known for family-style dramas and playing smart-mouthed Garibaldi on Hill Street Blues. He also directs four episodes, but it’s certainly Wiseman who sets the show’s tone in the pilot who dominates here. The show was also co-created and run by writers Alex Kurtzman and Roberto Orci, both of whom have worked with J.J. Abrams on shows like Alias and Fringe. So it should come as no surprise that the show contains much of that drawn-out mythology that has become a genre all its own these days. It’s all filmed in and around the Wilmington, North Carolina area.

The episodes also feature the trendy dual-story vehicle. We get treated to many flashbacks to pertinent events back in the 18th century where Ichabod had his original encounters. These moments focus on Ben Franklin a lot this season. He’s played wonderfully by Timothy Busfield, at times in the nude. You see, Franklin liked to take what he called air baths. We see the true supernatural meaning of the fabled kite-and-key story. We also learn that Franklin was trying to build and animate a corpse much like a certain Dr. Frankenstein.

Fans of the National Treasure films will also find a familiar formula here: lemon juice to bring out secret invisible ink, and enough conspiracies from our founding fathers to placate Dan Brown and Brad Meltzer. These clues often lead to historic locations where the next clue can be found. The big reveal to these clues leads them to an underground chamber where the hologram version of Thomas Jefferson awaits Crane. In secret, Jefferson built an entire research facility for the eventual use of the witnesses. Crane was once friends with Jefferson but was eventually “defriended”, and it turns out Jefferson did it only to keep this place a secret. It’s a virtual treasure trove of books and equipment but the duo will have to make a sacrifice to protect people from cannibal creatures who have infected the area. They were once guardians who turned feral after 200 years underground.

A charming aspect of the show is the fish-out-of-water tale of Crane adjusting to the modern era. There are plenty of scenes where he rages about prices, taxes, and smart phones. All of which I’d say I’m completely down for, and I wasn’t born in the 1700’s. Tom Mison and Nicole Beharie do develop a nice chemistry. It’s somewhat strained and requires some suspension of belief at times. She warms to his identity far more quickly than this trained and highly skilled police officer should have. It’s an important part of the story, and with only 13 episodes for a first season, we now have 18 episodes to keep the story going.

The show is starting to look more and more like Supernatural. They have used many of the same creatures in much the same design. They also depict demons exactly the same. They have black eyes, and they enter a body through a plume of black smoke. The angel Orion has black wings just as Castiel’s shadow wings are depicted. I’d be interested to hear executives from both shows talk about this crossover universe look.

Each episode is presented in its original broadcast aspect ratio of 1.78:1. The 1080p image is arrived at with an AVC MPEG-4 codec. The high-definition transfer is certainly stylish. Colors are mostly very cold with a blue tint to them. There is also a tendency to wash out colors with harsh lighting, particularly in the flashbacks. On the plus side the image is quite sharp. You get some really nice textures here that build an effective atmosphere. In episode 10 there is an odd and quite startling video breakdown. I went over it several times to be sure it wasn’t an equipment issue. It all breaks down terribly. Fortunately, it’s very brief, but I’m at a loss to explain it. There are also many instances of digital shimmer here that can be distracting. It appears almost like digital artifact which should not be present in a release like this. These issues mar what is otherwise a very impressive image. This also leads to merely fair black levels.

The DTS-HD Master Audio 5.1 has one of the strongest sub responses that I’ve encountered on a television release. When the Horseman rides, you get a wonderfully full and room-shaking thunder that is a sweet surprise. The sub adds in many other ways as well. It provides a much fuller feel to everything from dialog to score. The surrounds aren’t terribly aggressive but used to good measure. There’s just enough ear candy to keep you immersed in the atmosphere provided.

A Salute to Sleepyheads: (14:03) The feature looks at the show’s fan base. It’s become a popular extra on genre titles. The cast talk about their interaction with fans and we see some of the fandom first hand.

Mysteries Of Mythology: (15:17) The secrets of season 2 are revealed in this episode-by-episode recap.

Monsters & Mayhem – The Creatures of Season 2: (13:21) A look at the f/x and designs for the creatures of the season.

Hallow History: (10:15) This feature makes some of those historic links, mostly focusing on Franklin.

I hear that this series is slated to have a crossover with Bones this coming season. Part of me is intrigued, while part of me is shaking my head. There has been a reset button of sorts made this season. Relationships have drastically changed, and the apocalypse is no longer the focus of the show. With several characters we don’t even know if they’ll be heroes or villains. We’ll have to see where it goes from here. “Everything is in motion now. The battle lines are drawn. And which side each of the players falls remains to be seen.”

Gino Sassani is a member of the Southeastern Film Critic's Association (SEFCA). He is a film and television critic based in Tampa, Florida. He's also the Senior Editor here at Upcomingdiscs. Gino started reviewing films in the early 1990's as a segment of his local television show Focus. He's an award-winning recording artist for Omega Records. Gino is currently working on his 8th album Merchants & Mercenaries. Gino took over Upcomingdiscs Dec 1, 2008. He works out of a home theater he calls The Reel World. Favorite films: The Godfather, The Godfather Part II, The Body Snatcher (Val Lewton film with Karloff and Lugosi, not the pod people film), Unforgiven, Gladiator, The Lion King, Jaws, Son Of Frankenstein, The Good, The Bad And The Ugly, and Monsters, Inc.
White Shadow Digimon Fusion: Season 1, Volume 1