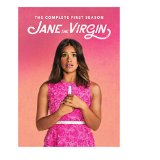 “Jane’s life was now the stuff of telenovelas.”

As someone who grew up in a Spanish-speaking household, I have a love-hate relationship with telenovelas. Most of the time, I can appreciate — and heartily laugh at — their inspired, over-the-top campiness. But sometimes I honestly feel a little embarrassed that this broad, ridiculous junk easily represents the most visible outlet for stories featuring Hispanic actors/characters. I’m also insulted by the implication that Hispanic audiences don’t want more nuanced TV options. The great thing about The CW’s Jane the Virgin is that it works both as an outrageous nighttime soap and a sharp, good-hearted satire.

Every episode of Jane the Virgin is narrated by a silky-voiced, unseen Narrator (Anthony Mendez), who is amusingly invested in the action on-screen and offers a breathless recap at the start of each hour. (Deep breath) Ok, here we go…

Jane Gloriana Villanueva (Gina Rodriguez) is a sensible, 23-year-old overachiever who made a pledge to her ultra-religious grandmother Alba (Ivonne Coll) that she would remain a virgin until marriage. The promise probably stems from the fact that Jane’s own mother Xiomara (Andrea Navedo) had Jane when she was 16 years old, and the father isn’t in the picture. Jane, on the other hand, is about to finish college and become a teacher, with an eye toward becoming a writer. She also has a boyfriend named Michael (Brett Dier), a nice-guy detective who has helped Jane honor her pledge to Alba. All of their lives are turned upside down when Jane is accidentally artificially inseminated by unstable gynecologist Luisa (Yara Martinez) and becomes a “pregnant virgin.”

The sperm sample belongs to Luisa’s brother Rafael (Justin Baldoni), a reformed playboy and the owner of the hotel where Jane works as a waitress. It was supposed to be inserted into Rafael’s scheming wife Petra (Yael Grobglas), who believed a baby would’ve persuaded her husband to stick with their troubled marriage long enough for a lucrative pre-nup to kick in. Complicating matters further is the fact that Rafael and Jane had a brief romantic dalliance five years earlier. Through a series of events too convoluted to get into here, Jane decides to stick with the pregnancy and becomes entangled with the Solano family drama. And speaking of family drama, I haven’t even mentioned the fact that Jane eventually reconnects with her biological father Rogelio (scene-stealer Jaime Camil), who also happens to be the star of Jane, Xiomara, and Alba’s favorite telenovela.

Believe it or not, those two jam-packed paragraphs only scratch the surface of what goes down during the show’s 22-episode first season. (By “Chapter 15”, for example, Jane has already gone through two scrapped marriage proposals.) Not surprisingly, the drama somewhat sags toward the middle before recovering with a strong final run of episodes.

Jane the Virgin is based on a Venezuelan telenovela called Juana la Virgen, which contains the same basic outlandish plot about a pregnant virgin, but doesn’t appear to feature any of the self-referential barbs at the telenovela genre. (This also sets it apart from something like Ugly Betty, which was more of a straightforward adaptation of a telenovela.) Creator Jennie Snyder Urman has tapped into the thing that I believe is essential for a proper parody: a genuine sense of affection for the thing you’re mocking.

Season 1 of this show features all the hallmarks of a respectable soap opera, including passionate romances, hidden identities, an evil identical twin, and temporary amnesia. There’s even a Big Bad crime lord known only as “Sin Rostro”, which feels like a half step too far…at least until that person’s identity is revealed. (It’s a genuinely surprising, effective turn of events.) All of this nonsense is gleefully undercut by clever touches like the omniscient Narrator and playful, typewritten on-screen text that helps us keep track of all the lunacy.

However, Jane the Virgin really clicks because of the care and attention paid to these characters between all the wackiness. There’s really compelling material here about family values and how parents long to make a better life for their children. Jane, for example, really wants her baby to be raised in the sort of “traditional” two-parent household she was deprived of, at least before she realizes what a sham the Solanos’ marriage is. (Besides, Jane turned out pretty darn good, so what’s wrong with being raised the way she was?)

The show also offers a refreshingly modern and balanced depiction of religion. While the other characters certainly raise an eyebrow when they hear about Jane’s vow, there’s never a sense that she’s being ridiculed for her choice. Then again, Jane the Virgin isn’t above poking fun at some of the more human qualities of holy figures. (The opportunistic nuns at the Catholic school where Jane works decide to use her pregnant virgin “miracle” to their advantage.) On top of that, I appreciated that (most of) these characters are presented as good, fallible people rather than the amoral monsters who typically populate soapy dramas. I also liked the fact that the “good guys” are allowed to be smart enough to pull off their own schemes. (Jane and Rafael successfully trick Petra toward the end of the season, and even nice guy Michael fools a suspect into potentially leading him to Sin Rostro.)

“They don’t actually give out awards to shows like this?”

It all starts with Rodriguez’s star-making performance as Jane. The actress, who nabbed a Golden Globe for her work, effortlessly projects kindness, intelligence, and strength. (Unfortunately, she and the show were largely snubbed at the Emmys, which only handed Jane the Virgin a well-deserved nomination to Mendez for Outstanding Narrator.) Although Rodriguez has strong chemistry with both prongs of her love triangle — a pleasing, comforting vibe with Dier, and more romantic sparks with the studly Baldoni — her strongest connection is with Navedo.

The mother-daughter pair — who are only six years apart in real life — share a complicated, recognizable connection that has Jane acting like the mother at times, and Xiomara trying to compensate for her own poor choices by going overboard in protecting Jane as an adult. Navedo is also great anytime she shares the screen with Camil, who is easily the funniest character on the show. Camil could’ve made Rogelio a vain, one-dimensional clown, but instead decides to play him as a man who simply loves too hard. And Rogelio happens to love Jane (and Xiomara) almost as much as he loves himself. Guest stars include Cheech Marin (as a potential love interest for Alba), Jane Seymour (as the head of a writing workshop) and an inevitable cameo by pop star Paulina Rubio (the idol of aspiring singer Xiomara).

Jane the Virgin: The Complete First Season features all 22 episodes on five discs. Each disc contains deleted scenes, and Disc 5 also includes a gag reel, and a pair of fun featurettes: “Immaculate Creation” examines the show’s genesis (with an assist from the show’s cheeky Narrator) and “Getting to Know the Cast of Jane the Virgin” reveals the actors’ hidden talents. (Gina Rodriguez can beat box and…Abuela Alba speaks perfect English?!)

I wasn’t even a little surprised to find that, in addition to the arrival of Jane’s baby, season 1 ended with a flurry of cliffhangers. There was a surprise pregnancy, and Petra got her hands on something that could rock Jane and Rafael’s world. How will it all turn out? “I’d love to tell you, but it will have to be later because this brings us to the end of part 1.” (Fans can take comfort in the fact that season 2 is set to premiere Oct. 12.)