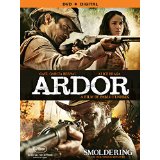 Gael Garcia Bernal and Alice Braga are both substantial screen presences in big Hollywood movies for quite some time now. Braga has been in big films like I Am Legend, Predators, and Elysium, while Bernal has been in a long string of interesting projects too long to mention, so I’ll single out two by Oscar-winning director Alejandro Gonzalez Inarritu, Babel and Amores Perros. They also co-starred previously in Blindness. Ardor is a much lower-profile movie. It seems like a passion project for Bernal, who is a producer on the project that is meant to be socially conscious and appeal to the South American market. It was filmed in the Argentinian rain forest and is trying to be a modern day western.

Ardor (The Burning) is very much like an old-fashioned western. It is a simple film about tobacco farmers in the wilderness trying to survive the rugged terrain. The complication is that roving bands of men come and slaughter and burn people off their farms in the area. Bernal plays a mysterious stranger who comes out of the forest to aid Braga as her father is butchered by the men. The movie moves with a hypnotic slow pace as Bernal and Braga manage to escape and hide together in the forest. The scenery is monochromatic and uniform, so it is hard to tell where they are. It seems they don’t stray far from the sparse farm buildings which we see from time to time. The dynamic between the two hiding in the woods and the greater number of men hunting them does change for long periods of time. It allows the two to bond in the rainforest. Braga does take an opportunity provide a brief sex scene in the rain. It is all very sweaty and rainy. At some points we see a leopard lurking about, which appears to be a spirit animal of Bernal’s.

It seems certain that the greater number of roving bandits will win out, but the leopard seems to thwart them at key moments. Eventually Bernal mounts an impressive offensive singlehanded in the jungle. It is like something from a western by Clint Eastwood or Gary Cooper. It is a retro and old-fashioned standoff. The film takes a very slow trip to get to that point, but it is satisfying when it finally does. It’s satisfying, but not very flashy.

The film has a message as well. It is saying that even today there are places that are so remote and forgotten that people can be treated in a lawless manner as if they live in a distant time long ago. All of this rampant, unchecked greed can still occur, and people can only look to themselves for protection. It wasn’t long ago that things like that happened in the American west. Bernal seems to be the embodiment of tribal legends that suggest mysterious forces come from the river and give strength to fight oppressors. The supernatural element is subtle and underplayed. If anything, the whole movie is too subdued. Boredom sets in throughout much of the duration of the film, but thankfully the climax has a mythic appeal. It doesn’t save the film from feeling slight and one-dimensional. I wish I had a better understanding of the region as a whole. It doesn’t seem to have a real identity and could be anywhere.

The single, central appeal falls back on the attractiveness of the two main actors. You could pose them sitting in a tree house for two hours, and we would probably still watch. I would prefer to see them both put to better use. The heat they provided was brief and intermittent considering the tropical location. It is a missed opportunity.