Posted in: Disc Reviews by Jeremy Butler on October 6th, 2015 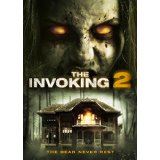 All right, my first addition for this year’s 31 Nights of Terror. Always a very exciting time, as ‘tis the season to jump out of your shoes. Unfortunately, that is not the case with The Invoking 2. I know it is bad form to jump into a franchise (assuming that two films can make a franchise) without seeing the film that came before it, sort of like beginning a novel in the middle instead of at the beginning. Have no fear, though, as I suspect that watching its predecessor is not a prerequisite for the watching of this disc. Clearly an anthology series, the runtime is made up of several different tales of death that give off sort of a campfire-ghost-tale vibe. So the premise of this collection is very fitting; it is not, however, scary.

The trouble with anthologies is that they all only have a set amount of time to conclude their story which makes building suspense a bit of a non-starter to say the least. That right there hardens my resolve against the collection; I do so enjoy suspense. Suspense is a much-needed addition in order to play on the audience’s fear. I needed time to let my imagination assume the worst, but with most of the stories told in this film, the conclusion came before my mind could even begin to wonder what was going to happen next. Always I was not very receptive to the varieties of tales that were told. A few showed potential such as the ones that dealt with psychosis. One in particular where the only person feature on screen was one woman, but the story did a good job of prolonging the revelation that she was her own worst enemy.

This story, however, like many of the others in this assortment, lacked backstory. I realize that the limited allotted time did not leave much run to include a full bio; however, most of the tales hinted at things that had occurred in a character’s past that had direct bearing on their current situation. Always a bad idea, because now my interest is piqued and I want to know more about the previous occurrence, and I am disappointed by curtain call. A few simple lines would have gone a long way into filling a few of the gaps that were created by their exclusion. Broad strokes in order to bring me into the story better, especially in the case of the second to last story. The event in her past was mentioned, but there was no reveal of the motivation behind the committed act, which would have gone a long way in helping me understand her current state of mind.

Also a good addition would have been a recurring theme that connected all the stories. As I mentioned before, the theme of each story varies, and though that does bring about a nice ghost tale vibe, it did very little to hold my interest as I was bounced between tales dealing with poltergeist and psychosis. Also certain tales could have been cut out completely and the expended time redistributed in order to strengthen the other stories. Such is the case for the addition about the man alone in the hotel room. I give points to the actor for holding his own, being the only person featured on screen, but the overall premise failed to resonate with me. By the time the story ended, I was more confused than scared.

Now let’s move on to the bit that matters the most. With this being a 31 Nights of Terror event, I imagine the question that everyone wants answered is the following: is this movie scary? The short answer is no. The more in-depth answer is that the lack of suspense is what ultimately leads to it not being scary. A few tales like the first one built a reasonable level of suspense, but the climax resolved too quickly. When things finally got rolling, it literally felt like blink and you would miss all the action.

Jeremy Butler is a film school graduate of the International Academy of Design and Technology. He is been writing for Upcomingdiscs since 2012; however, movies have played a big part of his life for much longer. Favorite genres include horror, science fiction/fantasy, and comedy. Favorite movies are V for Vendetta, Boondocks Saints, Kiss Kiss Bang Bang, and The Godfather.
Ardor Tuesday Round Up: October 6, 2015