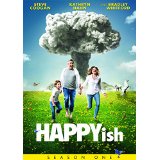 The most cynical people in the world are Madison Avenue advertising executives. There are probably some other types that would be in the running, but I think they would probably concede I’m right. Thom Payne (Steve Coogan) is a modern-day ad exec who immediately takes shots at the show Mad Men in his frequent narrations. That’s not the only thing he and his wife Lee (Kathryn Hahn) curse out in the profanity-laced Showtime series, Happyish. This show is famous or infamous for being the last project that Phillip Seymour Hoffman worked on before he overdosed (but he did complete a pilot episode). Coogan was eventually brought in to replace Hoffman after much hand-wringing and second-guessing. They are pretty dissimilar actors. Hoffman was full of vulnerability and an unpredictable intelligence. I’d love to see the pilot Hoffman filmed, but it has not been made available as yet. It definitely changes the dynamic of the show. Coogan doesn’t have the same gravitas, or warmth for that matter. Coogan tends to give off an arrogant and superior vibe. That changes everything.

Happyish, in general, also gives off a totally different feel than the multiple award winner, Mad Men. They take place in different universes. Mad Men is an epic look at the history of one agency over the years. Happyish is a present day satiric attack on just about everything in the culture. Satire can be a rough thing to pull off. Show creator Shalom Auslander was in advertising, and he is aggressive in his attacks on just about anything that comes to mind. When his barbs hit, they hit dead on, and when they miss, they miss by a mile. It is definitely hit or miss. Some of the more successful satire is on actual products and animated company representatives like the Keebler elves and the Geico gecko; both are brought on to spout unconventional bon mots. Coca-Cola, New York Life, the United States Armed Forces, and J.P. Morgan are some of the other real-life targets of other jokes. At one point, Rob Reiner is brought in to direct a commercial using real-life little people to replace the animated Keebler elves. Some of the other guest stars in the 10-episode run are Ellen Barkin as a corporate headhunter, Carrie Preston (True Blood) as a nervous account executive, Bradley Whitford (The West Wing) as the agency head, Richard Kind as Moses, James Deen as a porno actor philosopher, and even Hitler makes a cameo as the somewhat displeased director of a Coke commercial. Coogan is the creative director who has to deal with two 25-year-old Swedes, Gottfrid and Gustaf, who are very social-media-conscious.

The main point of the show is that no one is ever truly happy, not even privileged, entitled white people. It is very hard to identify with characters who are both spoiled and massively discontented. The comedy comes and goes, but the underlying misery is always there. Most people who are well off probably don’t see themselves as miserable, but maybe they are. It’s just not easy to watch them constantly bitch and whine.
It ultimately comes down to the show that was made and the one that might have been. How much of a difference would Hoffman have made to the final product? I think everyone agrees, he would have made a huge difference. It’s not like most sophisticated adults don’t like Steve Coogan, but probably not as a central character. He is not as good an actor as Phillip Seymour Hoffman. It’s that simple. I think the show had lots of potential, but it didn’t get up to speed in the first 10 episodes. It turns out that that’s it. There will be no more episodes. The first 10 episodes are all that there are going to be. Showtime canceled the show for low ratings and no awards buzz. Showtime is now facing off against not only HBO but dozens of other premium and basic cable and streaming services all actively in the awards hunt along with the good old network channels. It is a new world with an avalanche of product vying for our attention. Those shows that don’t find a way to get attention and love will just fade away and die. Happyish is one of the shows that faded and died. Happyish is now not only deadish, but totally and most sincerely dead.