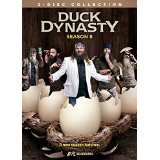 “Meet the Robertson clan. They turned duck calls into a multi-million-dollar empire.  But running a family business is tough when the family just wants to run wild.”

The Robertson family is quickly becoming the most recognizable family on TV, considering they are flooding the stores with their books, DVD’s, and many other products you can find at Wal-Mart.  I can’t help but think this is a family that is doing everything right, and good for them for the success they’ve managed.

Seeing a positive reality show is refreshing, and the fact that it’s not filled with backstabbing and manipulation just allows it to stand out from everything else.  Every episode continues to try to deliver some life lesson or attempt to show the value of a wholesome family environment.  Is it hard to relate because we’re following a multi-million dollar family?  Surprisingly, this might be the most relatable family to hit the TV screen.

But getting to the heart of the show, what makes this show work is how well this family seems to pull together for good times and bad.  Sure, people can hate on the show because people just have a problem with the Robertsons and their beliefs, but what you can’t take from them is that they genuinely care for one another.  To glimpse into the lives of others while we can sit in the comfort of our homes as we watch the drama or silly antics unfold where we can connect or simply see things we can’t imagine happening with our families is the appeal of reality television.

Overall I can’t say this is groundbreaking television, but for what it is I had a good time with it, and it was never boring, which is always a good thing.  Sure, a lot of this is staged, but considering most of the time the guys are moving through the woods with guns and explosives, perhaps a little staging in the name of safety is a good thing.  But for those who are tired of the reality shows that seem to thrive off characters simply fighting or bed-hopping, Duck Dynasty is a breath of fresh air.

Season 8 is all about the engagement and wedding of John Luke. Willie gathers the guys to take John Luke golfing right before his wedding engagement party. Of course, they have some advice for the young man. If he’s smart, he’ll forget all about it. Check that. He should have forgotten all about it. The boys put on their own fireworks display for the 4th of July. Jase suddenly thinks he’s a pest-removal expert and decides to take his talents on the road with the expected results. One of the funniest episodes of the season is Pranks For Everything. A practical joke war gets out of control with the guys. There’s the requisite bachelor party for John Luke that gets out of control when the guys find an unstable cache of old black gunpowder. Uncle Si has a near-death experience and puts together a bucket list. Of course, he wants the whole gang to help him pull it off. For some reason, the release does not include the wedding episode which aired just a week after the final one included here. You get eight episodes on two discs with some bonus footage.

In the end though the show continues to deliver some good laughs and some fun life lessons the entire family can enjoy.  This isn’t the show that could take me away from Breaking Bad or Under the Dome, but it’s still something worth giving a shot when you have some empty space on the DVR or simply want some fun, light entertainment.  For me this is a guilty pleasure that I can’t help but look forward to seeing what shenanigans the family gets into next.