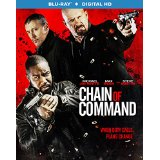 Even if you haven’t sat through a ton of revenge-minded pulp, you won’t be surprised to hear the answer to the above question is a resounding, “No!” The good(ish) news is that Chain of Command manages to stand out from a pretty crowded straight-to-DVD action pack. The disastrous news is that this laughably bad, shoddily-made debacle is likely to stick in your memory for all the wrong reasons.

James Webster (Michael Jai White) is a special ops superstar who is home for the holidays. While hanging out with his older brother and some war buddies, he starts to suspect they might be involved in something unsavory. Those suspicions are confirmed when his brother and one of his special ops comrades are killed. James turns to former ally Lt. Ross (Max Ryan) for assistance. The investigation leads James to a drug ring involving soldiers smuggling in contraband via body bags. Turns out his brother was mixed up in the drug ring and involved in the theft of $40 million. Now the head of the drug ring has brought in ruthless military assassin Ray Peters (“Stone Cold” Steve Austin) to recover the missing money, which puts him on a collision course with Webster’s own mission of revenge.

On paper, this is the sort of hopelessly generic, low-budget action movie that could have been given any number of vague, puzzling titles…and that’s precisely what happened here. Chain of Command was originally known as Echo Effect (what does that even mean?!) and also goes by Deadly Target. To be fair, many movies have different working/alternate titles, and a bland name is honestly the least of this movie’s problems. The script by Kevin Carraway (who also directed) and Lawrence Sara is a pile of clichés that asks its main character to say things like, “If it’s a war they want, I’ll bring it to their doorstep.” Unfortunately, Carraway’s direction is much, much worse.

I don’t get any pleasure out of being cruel, but the production values, action sequences, and overall look of Chain of Command are flat-out embarrassing. It’s so bad that I was honestly shocked to find Carraway had directed anything more demanding than traffic prior to this film. (And one of his past movies is apparently pretty decent.) The movie features cheesy, amateurish slo-mo at odd times, choppy editing that muddles the action, and I’m pretty sure I saw a mat on the floor to break a stunt person’s fall. (At least the mat was quickly removed before the next shot.)

It’s a shame because Michael Jai White — who seemed on the verge of a breakout 20 years ago after starring as Mike Tyson in an HBO movie and landing the title role in the feature film version of Spawn — still looks the part of an action badass at age 47. Too bad the actor chose to adopt an oddly detached demeanor to play Webster, which makes lines like “you’ve got that crazed look in your eye” feel unintentionally hilarious. And even though White — unlike certain other aging action stars — is still spry enough to carry out the physical demands of the role, the lethargic, clumsily-staged fights and shootouts ultimately let him down.

Even more bafflingly, Austin isn’t even allowed to get in on the action until the very end. (What’s the point of putting White and Austin in the same movie if they’re not going to fight each other?) Instead, Austin spends the great majority of his screen time berating and intimidating underlings. The former wrestler is used to cutting promos, so he’s actually pretty decent at delivering Peters’ menacing monologues. However, it still feels like a misguided bit of casting to hire Stone Cold and force him to cool his heels on the sidelines.

By the time the movie tries to cram in some commentary about the mistreatment/underappreciation of vets, Chain of Command has long lost any credibility it might’ve had. (Which is a shame because there’s a worthy shout out to the National Coalition for Homeless Veterans.)

Chain of Command is presented in an aspect ratio of 1.78:1. The 1080p image is arrived at with an AVC MPEG-4 codec at an average of 27 mbps. This is your pretty standard, straight-to-DVD-caliber presentation. Clarity is reasonably good overall, even though the level of fine detail is nothing to write home about. Black levels are ok. The prevailing palette is pretty overcast, which doesn’t lead to many striking visual moments. The sketchy-looking FX on display — like the hilariously phony spurts of blood — have more to do with the low-rent nature of the production rather than this capable disc from Lionsgate.

The DTS-HD Master Audio 5.1 track produces some unintentional laughs that, again, probably have more to do with the movie’s ineptitude. Sound effects — punches landing, guns being cocked — are comically exaggerated. (And I haven’t even mentioned the overused “whooshes” that belong in ’70s kung-fu movies.) Along those same lines, the plodding, forgettable score by Steve Yeaman is way too aggressive at times and overwhelms the rest of the sound field. There is a bit of dynamic rear channel activity (a helicopter in flight at the beginning of the film, some whizzing bullets later on), but it’s really the only notable bright spot in a pretty pedestrian track.

As I said before, Chain of Command stands out for all the wrong reasons: a rote, misguided script, uninterested actors, and truly atrocious direction.

At least the movie is good for a laugh or 10. Sadly, I can only recommend this for the off-the-charts unintentional comedy factor.