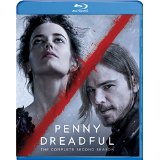 I can’t think of a more fitting way to kick off the first Tuesday Round Up of October than with the monster mayhem of Paramount’s Penny Dreadful: Season 2. And speaking of mayhem, the Showtime series is part of a whopping 26(!) titles making their debut today that we’ll be reviewing on this site very soon. Ok, fine…Disney’s Avengers: Age of Ultron technically premiered last Friday, but I felt it was a good idea to mention one of the biggest movies of the year. Warner Bros. shows us where Batkid Begins, offers the royal treatment with Reign: Season 2, and serves up The Leftovers: Season 1. In addition to Penny Dreadful, Paramount is feeling Happyish: Season 1, goes down to South Park: Season 18, digs into the life of Tut, and studies the Greatest Heroes of the Bible. Meanwhile, Cinedigm serves up laughs with Bossip Comedy Series: Part 2, visits Paranormal Island, goes head over heels for The Falling, and keeps 4Got10 in mind. (Be on the look out for an interview or two with the cast and crew of 4Got10.)

We’ll also be chatting with Noel Clarke of The Anomaly courtesy of Anchor Bay, which also drops Earthfall. And since you can already win a copy of June from Image Entertainment (which will also release The Invoking 2), why not keep your eyes peeled for our review? Lionsgate takes aim at The Target, gets heated with Ardor, and dines out with Eaters. A&E Home Video quacks up with Duck Dynasty: Season 8 and is out for Blood & Glory: The Civil War in Color. Hallmark gets into the holiday spirit early with Christmas at the Cartwrights and the Best Christmas Party Ever. Finally, MPI Home Video keys in on Manglehorn and Nasser closes things out with Final Girl.

With so many titles out this week — and such variety — there’s gotta be something here that caught your eye. Once a month we’re going to give away a free DVD title to a lucky winner who comments in our weekly Round-Up posts. All you have to do is comment in a Round-Up post — like this one! — and tell us which of these titles you’re most excited to watch or read about. The winners and their prizes will be announced the first week of every month right here in our Tuesday Round-Up post. You can’t win if you don’t comment.