Posted in: Disc Reviews by Archive Authors on October 6th, 2015 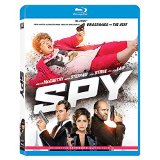 I don’t enjoy writing negative reviews. It’s a struggle when the film experience was joyless and then to have to go back and relive that. I also don’t enjoy reading reviews by other critics that get everything completely wrong. It’s even worse when almost all the critics get it wrong. Even worse than that is when I see critics dumping on a film that’s actually good, but that’s a story for a different day. How can I say Spy is so bad? Because I had to sit through the movie. I can get some enjoyment out of even the worst movies, and that’s true here, but I would not recommend it to unsuspecting viewers.I do imagine a lot of people will enjoy the movie despite themselves if they are paying for babysitters, etc. Again, I do think every movie has some entertainment value. I will try to find it in the new movie Spy. The first good thing I can say is that Spy is a chick flick that lets chicks save the day. They don’t look great doing it, but they save the day. That’s one of the problems. Almost no one looks good in this film.

The film has a great cast. Melissa McCarthy is the big star, but she shares billing with Jason Statham, Jude Law, and Rose Byrne. You can also throw in sturdy supporting players like Allison Janney and Bobby Cannavale. There are plenty more, but those are the names. I will say that the person who comes off the best is Rose Byrne. She plays a super-bitch super-villain who you truly believe doesn’t like anyone. She dispatches people with the unpleasant venom of someone who doesn’t like the service she is receiving at a restaurant. Jason Statham has the thankless job of making fun of himself. He seems game, but he doesn’t really pull it off. He gets some of the funniest material but almost flubs most of his lines with his mush-mouth delivery. Jude Law gets the part of the perfect James Bond-type spy, but you get the hint of embarrassment in his facial mannerisms like he’s trying too hard to spoof the trope.

Allison Janney is a very familiar face over the years and a reliable performer. Here she is an annoyed and miserable administrator over a group of drone-like spies. She comes off miserable and annoying. Frankly, I’ve never seen her look worse. She certainly wasn’t funny. Bobby Cannavale has been great in so many things in the last few years, it’s a little disappointing to see him play a kind of mid-level villain functionary. The humor is almost on a level of the famous spy TV series by Mel Brooks, Get Smart. I said almost. They writer and director, Paul Feig prides himself on pushing the envelope by including lots and lots of curse words. Fabulous. Sometimes that works. Sometimes it’s just offensive. Why didn’t he include lots of nudity and sex scenes if he was going for the R- rating anyway? There are a few gory death scenes, so at least it has that going for it.

Then we come to our big star, Melissa McCarthy. I remember her being funny in Bridesmaids (as was her co-star Rose Byrne). But that comedy was extremely sharply written, and everyone had moments to shine. Melissa has had the spotlight shine brighter on her lately, more than almost anyone aside from Kevin Hart. I can’t wait to see a movie where they are co-billed. They both like to chew the scenery. There is another scene stealer here named Miranda Hart. She is buck-toothed giant best known from British TV. Her scenes are effective as a kind of second banana to McCarthy. I think she is taking the brunt of stupid and awkward, allowing McCarthy to take the mantle of leading lady. I personally am one of the few people who has not been thrilled with the comedy of McCarthy. I think McCarthy herself is probably uncomfortable with the way she’s been used. I’ve been hearing rumblings from her camp that she never comes off pretty enough. I really didn’t like her in St.Vincent and Tammy but also was not bowled over by The Heat, her previous teaming with Paul Feig. I also am not thrilled with Feig since everything seems too loose and improvised to the point where I’m saying, “Didn’t they have a better take than that?”

So in case you didn’t notice, this is a negative review. I didn’t want to do it. It was a dirty job, but someone had to do it. I suppose that’s what they said when they were making this movie.

Spy is presented in an aspect ratio of 2.40:1. The 1080p image is arrived at with an AVC MPEG-4 codec at an average of 20 mbps. Fine detail and clarity are terrific, and flesh tones are consistently (and appropriately) warm and natural. (This isn’t a chilly Bourne movie, after all.) Along those same lines, colors pop impressively — although they usually come courtesy of McCarthy’s more garish get-ups — and black levels are deep (see Law’s tuxedo) and offer pretty good shadow definition. (One exception is a scene involving Susan and a fellow prisoner in a dungeon.) The production’s European locales shimmer impressively during any exterior sequence. Thanks to this impressive Fox Blu-ray, the film looks almost as good as the glossy spy adventures it’s poking fun at.

The DTS-HD Master Audio 7.1 track comes even closer to matching the big-budget bombast of spy capers. The disc takes advantage of the two extra channels by keeping the rear speakers buzzing with activity throughout each action sequence. Bullets whiz and cars whoosh from one channel to the next during the busier stretches. However, there is also a more subdued sense of immersion during relatively quiet scenes at restaurants or CIA headquarters. Theodore Shapiro’s Bond-adjacent theme swells throughout the sound field intermittently, and even the subs are heard from during a pair of room-rattling explosions. Not too shabby for what would ordinarily be a dialogue-driven comedy.

All of the bonus material is presented in HD. There is a 130-minute Unrated Version of the film that is about 10 minutes longer than the Theatrical Cut and can be accessed using the Set-Up option on the menu screen.

Classified Alternate Scenes: (31:51) Some of the 15 scenes feature slight variations on existing material from the film, but a lot of them are completely different versions of what we see in the theatrical cut. Not exactly surprising given the obvious freedom writer/director Paul Feig gives his actors to improvise. Features a Play All option.

Extra Top Secret Behind-the-Scenes Gag Reel: (3:43) This second gag reel shows us crew members getting in on the lunacy.

Director of Intelligence — Feig Makes the Cast Do His Bidding: (8:53) An amusing featurette that has the director — from somewhere off-camera — yelling out alternate lines for his cast to try. I was pretty impressed by the actors’ ability to compose themselves and deliver Feig’s suggestions with a straight face.

Susan and Her Men: (8:18) Footage of McCarthy riffing opposite her male co-stars. Like many of the film’s scenes, goes on way too long.

Super Villain Rayna Can’t Keep It Together: (5:05) This is exactly what you imagined: a collection of clips featuring Byrne cracking up during filming.

Super Vermin: (1:34) The supporting comics who play Susan’s fellow CIA-basement dwellers get a chance to riff with the critters who infect their characters’ workspace.

The Many Deaths of Anton: (0:57) Even a relatively minor henchman gets an extended send-off, as we hear him try out a bunch of “final words” before he expires for good.

The Trouble with Covers: (2:28) This blooper reel has the cast struggling to keep characters’ names straight.

For Your Eyes Only — Jokes-A-Plenty: (13:25) By this point, this is a somewhat redundant line-o-rama that has cast members (especially McCarthy and Hart) trying out different punchlines.

The Handsy World of Spies: (1:52) Obviously, Peter Serafinowicz lecherous Aldo gets some screen time here, but there are also clips of other cast members showing one another plenty of (physical) love.

Speaking is an Artform: (1:57) Yet another collection of outtakes, this one featuring tongue-tied actors blowing their lines.

Super Villains of the Animal World: (2:19) Brief clips of the actors comically losing their composure with their animal co-stars.

How Spy Was Made: A collection of eight entertaining featurettes. Paul Feig: Alt-P (11:08) is a brisk, lighthearted profile of the filmmaker. Indecent Proposals From the Cast (3:04) covers some of the actors’ rejected pitches for their characters. Changing Statham (5:45) examines the action star’s comedic turn. Stuntarama (13:26) covers the film’s (surprisingly plentiful) action set pieces. In Da Klub (6:26) takes us to the film’s museum-turned-nightclub set and inside the 50 Cent cameo. Susan’s Disguises (4:31) reveals the main character’s hideous costumes were McCarthy’s idea. Odd Couple On Set (4:50) is dedicated to Feig and McCarthy’s kooky chemistry. No Go Gadgets (3:36) features the CIA-basement crew showing us their decidedly uncool office supplies.

Commentary: Feig does the honors, along with cinematographer Robert Yeoman, gaffer John Vecchio, producer Jessie Henderson, and fight coordinator Wally Garcia. This is a jovial, informative track that covers the film’s production throughout Europe and plenty of bawdy anecdotes. The commentary is available for both the theatrical cut and the longer unrated version. I suggest you go with the unrated version, since the theatrical commentary seems to have been edited down from the longer cut.

Even though a chunk of the bonus material is a textbook example of quantity over quality, the Blu-ray’s impressive A/V components and the extensive special features give this release a slight boost.

Parts of this review were written by John Ceballos

“31 Nights of Terror” A Plague So Pleasant Happyish: Season 1