Posted in: Disc Reviews by Dan Holland on October 10th, 2015 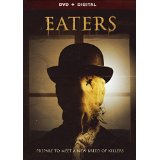 At first, Eaters looks like a pretty fun horror film. The cover depicts a well-dressed figure in a scarecrow-like mask and a bowler hat. Above him in typical horror font, the title is displayed, followed by a tagline that reads: “Prepare to meet a new breed of killer”. First impressions are everything, and this is promising a lot. After watching the film, I’ve come to realize that the title, Eaters, is very misleading. In fact, I’m almost positive that not a single person ate anything in the entire film. The film follows a group of five young adults taking a road trip through the desert. Complications arise at a rest stop, where one of the young women goes missing after running into a gang of drug-smuggling bikers. The group gathers enough courage to confront the bikers, only to be met with conflict. The group of friends talks their way out of the confrontation and end up in a seemingly deserted town occupied by a community of masked murderers.

For me, the film’s biggest flaw is in distribution: The cover is a little too enticing. It promises so many things that aren’t in the film at all. There is an implication that this “new breed of killer” eats their victims, but aside from that, there is no cannibalism. While the scene of a masked butcher chopping up his victim is very well crafted, the concept is nothing that I haven’t seen before. Unless the “new breed of killer” is a group of cannibals that die of starvation because they forget to eat, I’m not quite sure the film’s marketers even sat in on a screening.

In addition to the confusing marketing strategies, there is an unfortunate combination of awkward acting and a rather worn-out concept. There is an obvious effort to implement multiple original concepts into the story, but ultimately they begin to feel a little too forced by the end of the film. I really enjoyed the addition of the biker gang, but the payoff of having them be involved was very underwhelming. Basically, it is very obvious that there was a lot of positive spirit in the screenplay that just doesn’t translate well onto the screen.

However, what does work (and ultimately, what makes this film worth watching) is the film’s fantastic imagery. The cinematography and editing alone are proof that the filmmakers understand proper execution of their craft. Most of the time you are treated to creative camera work and seamless editing, which makes the awkward acting tolerable. One of the most striking visuals of the film is the aforementioned butchering of one of the victims. If you are a fan of gore, then this scene alone will make the movie for you. The victim’s torso lays motionless on the table, as the butcher cuts up his entrails, with his bottom half nowhere to be seen. I’m actually curious as to how they filmed it, because if it was CGI, it certainly fooled me.

Finally, the costume design in the film may be very similar to other films, but it just works here. Burlap masks with “X’s” over the eyes, dressed in farm attire or formal wear, much like you might see on a scarecrow. Even the children of the town are dressed like this, creating a very creepy atmosphere. I believe Eaters is worth a watch for horror fans; just don’t pay any mind to the title or tag line.