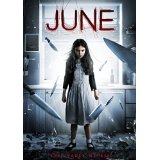 Secrets abound in this horror more akin to The Omen rather than Carrie as I had originally suspected. I tell you, that life lesson about not judging a book by its cover still rings true. On the horror scale it does not really have that bone-chilling effect, but it holds its own, and the young talent does make an impression. Kennedy Brice plays the titular character, a little girl with an active imagination, or at least that’s what the grown-ups tell themselves as strange incidents keep happening around her.

As mentioned above, June is a little girl who has moved from foster home to foster home since being put into the system. Born into a cult that believed her to be the vessel for an entity that would bring judgement to the world, a massacre during a ceremony leads to her being brought into the system. After her latest placement ends in an occurrence that no one can explain, her social worker (Eddie Jemison) finds her a home with a loving couple, Dave and Lily Anderson (Casper Van Dien and Victoria Pratt).

Not long after her placement, the occurrences begin again. When confronted, the only explanation from June is that Aer (the imaginary friend) is responsible. Lily is desperate to reach June and brushes off any suspicions, while Dave is more hesitant about his new occupant. Occurrences continue such as spontaneous rain, malfunctioning appliances, and ominous and haunting prophecies uttered from June’s very lips drive a wedge between the couple, which turns out to be the least of their troubles as other forces begin to work against them.

Not a bad story, though it did lose a bit of momentum in the middle. It had a solid opening with a bit of foreshadowing and fitting ominous music. However, the momentum was lost during the setup with the interaction with the family before the Andersons.  I understand the necessity for its inclusion; the purpose was to show how bad June’s circumstances were and to provide credence to the actions of Aer; however, five minutes could have been shaved from this portion without causing irreparable damage. My only other issue with the story was the ending, which felt rushed. This goes hand in hand with my opinion that shaving down the interaction with the original family and redistributing that allotted time to the conclusion would have made the end not feel so rushed. There are some key reveals towards the film’s conclusion that were essentially glossed over and impact the overall film. Without going into too much detail, let’s just say that these overlooked details explain a lot of about certain characters’ motivation and deserved a more attention than they got.

There are a lot of familiar faces; however, it is the face that I was unfamiliar with that had the greatest impact. Kennedy Brice has the looks of an innocent little girl that you want to protect from the world, but it is the scenes where Aer takes control that show her talent. Her looks quickly shifts from innocence to darkness during these scenes, making them valued additions.

June is not likely to have you sleeping with the light on, but still worth a watch during this holiday season. Also the film has a better degree of special effects than I have ever seen in a film of this caliber. Kudos for that.

Jeremy Butler is a film school graduate of the International Academy of Design and Technology. He is been writing for Upcomingdiscs since 2012; however, movies have played a big part of his life for much longer. Favorite genres include horror, science fiction/fantasy, and comedy. Favorite movies are V for Vendetta, Boondocks Saints, Kiss Kiss Bang Bang, and The Godfather.
“31 Nights Of Terror” Eaters Reign: The Complete Second Season