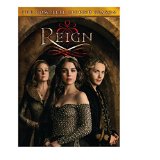 “It is upon us now…an old and faceless foe.”

In the second season of Reign, that foreboding statement refers to the plague and ensuing famine that lay siege to the court of King Francis II, Mary Queen of Scots, and their subjects. But in real-life terms, the most dangerous “old and faceless foe” for a promising series entering its second season is the “sophomore slump.” That’s why I’m pleased to report the CW’s sumptuous period drama was able to maintain the shamelessly soapy momentum from its guilty pleasure first season.

King Henry II (Alan Van Sprang) is dead. His son Francis (Toby Regbo) now sits on the throne of France with his wife Mary (Adelaide Kane) by his side. Unfortunately for Francis, he doesn’t get to be a peacetime king. As the plague threatened to breach the castle walls at the end of season 1, Francis rode into the French countryside to find Lola (Anna Popplewell), Mary’s lady-in-waiting with whom he had fathered a child. Francis’ relationship with Lola and his son obviously creates friction in his marriage with Mary — especially since Mary is yet to give Francis a legitimate heir to the throne — but that’s nothing compared to the escalating tension between the country’s staunchly Catholic citizens and its persecuted Protestants, as well as the pressure the country’s nobles put on the new king to look out for their best interests.

Those nobles are led by Stephane Narcisse (Craig Parker), who is initially motivated by personal revenge but eventually comes upon a piece of information that allows him to manipulate the king. Francis (and later Mary) also connects with distant cousin Louis, Prince of Conde (Sean Teale), whose gentle nature belies his family’s ambition for the throne. The rest of Mary’s ladies-in-waiting are also trying to maintain their improved lot in life. Kenna (Caitlin Stasey) and Henry’s illegitimate son Bash (Torrance Coombs) make for a surprisingly functional pair considering they were forced to marry. Unfortunately, Bash’s new role as the king’s deputy keeps him away from home for long stretches of time. Greer (Celina Sinden) gave up true love with penniless servant Leith (Jonathan Keltz) for the security of a marriage to kindly Lord Castleroy (Michael Therriault), although she ultimately winds up relying on her own enterprising instincts. And of course, there’s conniving queen mother Catherine de Medici (Megan Follows), who refuses to be sidelined after the death of her philandering husband Henry.

Reign continues to play fast and loose with history. A lot of detractors might focus on the “loose” part of that previous sentence — the Mary, Queen of Scots saga is treated more as a picturesque backdrop for heartbreaking betrayals and forbidden romances, and less like something that needs to be seriously adhered to — but the show knowingly revels in the “fast.” History is the ultimate ***SPOILER ALERT*** — showrunner Laurie McCarthy isn’t shy about the fact that the real Francis wasn’t the longest-reigning king of all time — so the show manages to pack an impressive amount of drama into his time on the throne.

That includes some detours into the realm of the supernatural that work better when they’re grounded in some kind of reality. As a result, I preferred the ghostly visions experienced by Catherine (which are revealed to have a more earthbound explanation) versus the more overt fantastical storyline involving a witchy seer named Delphine (guest star Alexandra Ordolis). There’s also the incessant, typical-for-a-CW-show bed-hopping that occurs among practically all the major characters. While Reign presents these affairs as the source of political, country-shattering strife, they often to lead to some entertaining, unexpected pairings. (Again, good for queen mother Catherine for getting in on the action!) Not surprisingly, the most effective drama is almost the most relatable: so whenever Francis is torn between listening to his mother (who advises him to satisfy the nobles) and keeping Mary happy (she wants Francis to consider the well-being of *all* of his subjects), he’s basically like any dude caught between his mom and his wifey.

“You have no idea what it’s like being a girl in this world. Owning nothing, having no power except the effect you have on men.”

Women may have been societally limited in the 16th century, but they are the engine that powers Reign. Kane continues to make for a compelling, strong-willed young queen. I also appreciated that the character’s righteousness isn’t infallible; Mary’s heart may be in the right place, but we see her make some disastrous blunders here. Follows is still a scenery-chewing delight. Catherine starts the season with a “been-there, done that” mentorship of Mary that is surprisingly pleasing given that they were such delicious rivals in season 1. (Ep. 6/“Three Queens” features Mary and Catherine amusingly running into a pair of impostors.) However, Catherine’s intense love for her family eventually pushes her back to the dark side. Meanwhile, Mary’s ladies-in-waiting are more scattered this season, with Popplewell’s Lola getting the most amount of screen time, but Sinden’s Greer getting the more gratifying storyline. Rose Williams also gives the show a mischievous jolt as Catherine’s bratty daughter Princess Claude.

Some of the men do acquaint themselves quite nicely. Parker is a fantastic season 2 addition as the overtly slimy (and aptly-named) Narcisse, who stands in stark contrast to the more mealy-mouthed character Teale is stuck playing. Regbo makes for a likable, conflicted king, while Coombs is unfortunately more isolated from the main action than he was in season 1. The menfolk get to shine toward the last pair of episodes of the season as a coup comes knocking on the castle walls. (There are battles in Eps. 21 and 22/“The Siege” and “Burn” that feature some impressive fight choreography, even though they are decidedly network-TV-scaled.) Of course, it always comes back to the ladies: season 2 concludes with the first on-screen appearance of a certain English monarch who has previously hung over the show like a specter.

Reign: The Complete Second Season features all 22 episodes on five discs. There are deleted scenes distributed across the entire set, and Disc 5 contains a featurette called “Playing by Her Rules: A Day on Set with a Queen and Her Court.” The CW moved the show to a new night, and season 3 premiered last Friday. That particular night doesn’t usually inspire confidence, but maybe the network figures Reign could shine on a less crowded night. Here’s hoping works: this is a playful (the orchestral, anachronistic version of “Royals” from season 1 gets a season 2 companion courtesy of Sia’s “Chandelier”) and enjoyably soapy riff on medieval times.