“31 Nights Of Terror” The Gallows

Posted in: Disc Reviews by Archive Authors on October 13th, 2015 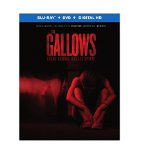 The Gallows starts off with a camcorder video shot of a high school play from 1993 in which a horrible accident occurs. It is immediately followed by video footage from 2013 that is labeled police evidence. That tips us off, if we didn’t know, that this is found-footage material. The found footage genre has grown substantially since the phenomenally success of The Blair Witch Project in 1999. One of the reasons that The Blair Witch Project was so successful is that the concept was fresh at the time. It isn’t any longer. It also made the actors genuinely confused and terrified during the process of filming. I don’t think actors fall for that any more, but they often pretend they’re terrified. Maybe they should pretend to act in the first place. The stars of The Gallows are all unknowns with the possible exception of Cassidy Gifford as Cassidy Spilker. If you used to watch Live with Regis and Kathie Lee before it became Live with Kelly and Michael, you would occasionally see the daughter of Kathie Lee and Frank Gifford show up on the set with her brother, Cody (or maybe you caught her on the fourth hour of The Today Show where Kathie Lee holds court lately). She is actually one of the best things in The Gallows and might have some potential in the future. I’m not saying she’s great, but with a little work in a better movie, Cassidy might have something. The rest of the cast aren’t terrible, but they’re not experienced enough to be very good. That could be said of the writer directors, Travis Cluff and Chris Lofing. In the extras they seem very excited about coming up with a new kind of horror villain, the Hangman. I wish it was that simple to create a memorable character. They may be right that hanging hasn’t been used often in horror films, but if they had plans to do something memorable they failed.

The movie is not long, but it is monotonous. It starts out with an obnoxious, homophobic jock making his buddy’s life miserable because he’s doing a play and hanging out with theater geeks. Eventually the obnoxious jerk convinces his so-called friend that he’s a lousy actor and he needs to sneak in to the theater that night to destroy the set. Supposedly this will get him out of being in the play. The obnoxious jerk (Ryan Shoos as Ryan Shoos), the friend (Reese Mishler as Reese Houser), the jerk’s girlfriend (Cassidy Gifford as Cassidy Spilker), and the star of the show (Pfeifer Brown as Pfeifer Ross) all get trapped in the school, and terrible things start happening. Basically the whole movie takes place in the dark school filmed by cell phones and one garbage camera. Half of the movie is basically screaming and really dark and chaotic footage. There are a couple of twists in the plot that are given brief attention before going back to the incoherent footage.

It goes without saying that this was an inexpensive movie to make and is probably a new low for the cheapie horror studio, Blumhouse Productions. Some of the franchises that Blumhouse produces are Paranormal Activity, Insidious, The Purge, and Sinister. I feel safe in saying that The Gallows will not be getting a franchise.

I like teenager slasher films as much as the next person, so I will suggest that it would have been nice to see a little more of the Hangman, who is apparently some kind of ghost. We see so little of this threatening character that we barely register his presence. Jason Voorhees, Freddy Krueger, and Michael Myers are all beloved characters who manage to display a lot of personality when they slice and dice their victims. The Hangman doesn’t slice and dice and doesn’t show much personality. Since the movie is only 81 minutes long, it might have be a good idea to spend a couple of minutes giving their evil ghost a little personality. Maybe they were saving that for the sequel (which will never get made).