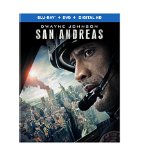 Ready to get Rocked? Dwayne “The Rock” Johnson headlines this week’s Tuesday Round Up, and he’s here to shake things up with Warner Bros.’ earthquake disaster hit San Andreas. Warner also hangs out at The Gallows, counts to The 100: Season 2, and develops quite The Following: Season 3. Shout! Factory answers our prayers with The Saint: Seasons 1&2, and Magnolia grieves The Little Death. Finally, we say farewell to Mad Men: The Final Season — Part 2 with a Coke and a smile.

Don’t forget to tell us which of this week’s Round Up offerings caught your eye? Once a month we’re going to give away a free DVD title to a lucky winner who comments in our weekly Round-Up posts. All you have to do is comment in a Round-Up post — like this one! — and tell us which of these titles you’re most excited to watch or read about. The winners and their prizes will be announced the first week of every month right here in our Tuesday Round-Up post. You can’t win if you don’t comment.

“31 Nights Of Terror” The Gallows The Target