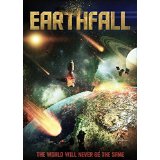 A scary premise, but overall this quickly becomes a story about one family overcoming obstacles to find one another again. Heartwarming, granted; however, not very fear-inspiring. Earthfall features a global incident, which ultimately could mean the end of days. A meteor storm strikes the Earth, knocking it off its axis. Terrifying, right? Good foundation, but based on what I observed, clearly not the focal point of the story, which says to me that this story clearly did not have its priorities right.

Now before I receive a tongue-lashing from our family-friendly audience, allow me the opportunity to clarify. I am not suggesting that idea that the main characters’ primary focus was to locate one another was wrong; I am indicating that for that to be the focal point of the entire story results in a lackluster movie. The actual grim circumstance receives very little attention in comparison. My observation is that the catharsis achieved by being reunited will be short-lived given the dire situation. You may embrace long enough to register the end of the world.

To bring everyone up to speed, let’s do a story recap. A destroyed planet has resulted in a meteor storm that is hurtling towards Earth. Brief pause; here is where my first issue with the realistic nature of the story came into play. As this event is happening, there is no warning about the occurrence. That is a tough pill to swallow given that we have federal organizations whose sole job is to monitor this kind of thing. If this was to happen in reality, I don’t care if it is the end of the world; someone is getting fired. Moving on, as Earth is struck, the planet is thrown off its access resulting in one-half of the planet being cooked due to sun exposure, and the other half freezing. Despite all of this going on, scientist Nancy Lannon (Michelle Stafford) leaves the safety of a government compound in search of her husband and daughter. Meanwhile, her husband (Joe Lando) is on a similar quest to find the family, while the daughter (Denyse Tontz) is attempting to locate a rumored safe haven from the onslaught.

I repeat, my issue is not with the character’s motivations, but with the amount of time spent on this aspect of the story. In comparison the most important aspect equates to little more than a footnote in the film: the possible solution to the dire circumstance.  There was another unrealistic instance that caught my attention, but I don’t want to give too much away. Let’s just say resources being allocated in such of fashion is unlikely, even if the world is ending.   The story also features a bit of an ambiguous conclusion that was difficult get behind.

In conclusion, it is the lack of realistic circumstance that diminishes the fear level in this movie. The concentration on the family dynamic takes this from sci-fi horror to I’m-not-even-sure-what to classify it. Just a bit more time focused in the right area would have made a significant difference to the overall production. Movie is worth a watch if you are in the mood for something heartwarming, but not if you are looking to be scared.

Jeremy Butler is a film school graduate of the International Academy of Design and Technology. He is been writing for Upcomingdiscs since 2012; however, movies have played a big part of his life for much longer. Favorite genres include horror, science fiction/fantasy, and comedy. Favorite movies are V for Vendetta, Boondocks Saints, Kiss Kiss Bang Bang, and The Godfather.
“31 Nights of Terror” Sharknado 3: Oh Hell No! (Blu-ray) Bossip Comedy Series Part 2