Posted in: No Huddle by Archive Authors on October 18th, 2015 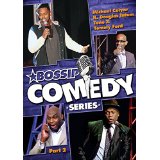 This DVD follows three standups, K. Douglas Tatum, Tone-X and Michael Colyer, as they perform for a live studio audience. We also follow Tommy Ford as he terrorizes the headquarters of Bossip, a gossip website. I would honestly love to tell you more in the summary of this DVD, but there is nothing more to it. A gossip website decided to release a DVD regarding comedy of some sort. This DVD was not good; entertaining such a notion that this DVD could be good should not enter any potential viewer’s mind. From the moment you play the opening credits, you can tell that this was made on a budget; more than that, it looks like it was made on a budget in the nineties. The small, unimportant things that fly by you while the names of the people responsible for this DVD come into view would not look out of place in a movie like Hackers. A lot of dated computer code graphics, a microchip (because technology?) and the sound used for almost every “computer working” moment in every TV show or bad movie (think Dexter’s Laboratory meets Ghost in the Machine). That’s just the first couple of seconds; then we are led into seeing how “The regular person feels about current events” by Tommy Ford. The interviews are overly cut with bad transitions, and lead us to one of my biggest problems with the DVD, the skits. These skits take up about half of the DVD’s run time, and none of them make me laugh or even remotely interested in the happenings at Bossip. I would say that I might not get it because I don’t frequent the Bossip site, but I was familiar with the stories talked about here just from looking at social media, and none of what they were saying was anything new or exciting.  The problem with a gossip column creating a DVD for public consumption is that I will never want to go back to it, since half of what they are talking about are things that have come and gone. It dates the material and makes this AT BEST something to rent. It’s the same problem that I have with movies like Date Movie or Meet the Spartans; the current humor used makes them a quick burn and severely limits the re-watchability.

Another big problem that I have with this DVD is that the cover is extremely misleading. From the cover I think that I will be seeing standup from four comedians, when in fact I am going to see standup from three comedians, and the other person just performs in bad skits. I was planning on trying to write a paragraph on each comedian, but I was just not given enough time with them. I couldn’t feel out if I liked their brand of comedy or not. A five to ten minute set is enough for me to say whether I would like to see more of a comedian or if they should stop doing comedy. K. Douglas Tatum (A.K.A. Special K) was slightly endearing, but he had this nervous twitch where he repeated himself a lot while he waited for the audience to get under control so they wouldn’t miss a joke. Normally this wouldn’t be a problem; for instance Geroge Carlin repeated himself a lot, but he never did it so often that it took away from the comedy. When he repeats himself I feel rushed, like he is desperately trying to get another joke out and doesn’t care about the audience hearing it. The next comedian, Tone-X, was my least favorite of the three. He has a running shtick throughout the entirety of his set that gets tired very quickly. If I can listen to Aziz Ansari do his Tommy character for an entire set, then I’m begging for you to stop your “Grown Man” character after the first minute and a half, there is something terribly wrong. The last comedian, Michael Colyer, was my favorite. He was more grown than Tone-X and didn’t need to tell us about how he is “a Grown Man.” He was seasoned enough to be the most comfortable performer.

In the end, that’s all I have to say for a 50-minute runtime about nonsense. There should have been more attention paid to the standups, the skits ruined the flow of comedy, and editing was atrocious. The only thing that saves this from receiving the lowest score is that one of the standups made me smile. Do not get this.

“31 Nights Of Terror” Earthfall The Falling