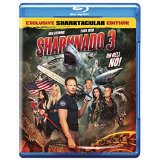 Oh Hell No! is the cheeky subtitle for the latest entry in SyFy’s made-for-TV Twitter Sharknado franchise. Coincidentally, “Oh hell no!” was also the response the creators of the first film got from everyone they approached about starring in it a few years ago. Flash forward to 2015, and things have changed dramatically. Now Sharknado auteur Anthony C. Ferrante needs a stick to beat away the washed-up actors, reality stars, and politicians(?!) angling to serve as chum for some comically unconvincing sharks.

“Why do you always have to be a hero?”

After a quick nod to James Bond — I’m not even joking — we catch up with Fin Shepard (Ian Ziering), the chainsaw-wielding hero of the franchise who always happens to be in the wrong place at the wrong shark time. Fin is in Washington, D.C. to receive a commendation from the president (Mark Cuban) for his exploits in the previous two films. It doesn’t take long for the skies to darken and a sharknado to wreak havoc on the White House (and guest stars like Bill Engvall, Maria Menounos, Lou Ferrigno, Ne-Yo, and many more).

Meanwhile, Fin’s wife April (Tara Reid) is in Orlando’s Universal Studios with their daughter Claudia (Ryan Newman, taking over for Aubrey Peeples) and her own mother May (Bo Derek). Fin vows to be present for the birth of his second child, but his road trip is interrupted by yet another sharknado. He is eventually reunited with his old friend Nova (Cassie Scerbo), who has become a hardened sharknado hunter after her near-death experience in the first film. (This is where I pause to bemoan/marvel at the fact that the Sharknado trilogy has been around long enough to bring back popular characters.) Nova’s new sidekick Lucas (Frankie Muniz) believes the numerous storms on the Eastern seaboard could combine to form an apocalyptic “sharkicane.” As a result, Fin has two family reunions on tap: he has to save April and Claudia from the mayhem at Universal Studios, and he has to re-connect with his estranged NASA colonel father (David Hasselhoff) so they can all destroy the shark storm from space.

Yes, I said “space.” At this point, the Sharknado team is clearly steering into the ridiculousness of the entire enterprise. The films come from The Asylum, the independent production company best known for making ultra low-budget “mockbusters” that sound just enough like actual blockbusters to potentially fool people into checking them out. (Recent Asylum offerings include San Andreas Quake and Age of Tomorrow.)

“Could be worse…could be zombies.”

It’s hard to say exactly why Sharknado (of all things) captured the Internet’s imagination and propelled itself into the zeitgeist in such a unique way. (As opposed to the dozens of ludicrously-titled SyFy movies that preceded it, or even a newer Asylum offering like Lavalantula.) Nevertheless, the filmmakers have eagerly accepted the responsibility to deliver brainless, (fake)bloody entertainment.

As someone who truly appreciates artfulness and craftsmanship in cinema, there’s a part of me that feels like I should be offended by these movies. However, there’s also a part of me that appreciates the inspired lunacy of seeing the Washington Monument get picked up by a sharknado and thrown into the White House. (Roland Emmerich is kicking himself for not thinking of that one.) Those moments and the nods to Jaws — Mark McGrath’s character is named “Martin Brody”; there’s a reference to a Washington Post reporter named “Benchley” — are much better than some of the more slapdash celebrity cameos. Even the main attraction — unconvincing sharks unconvincingly mauling/decapitating/smashing people — becomes a little mind-numbing after a while.

It does help that the cast is largely game, and I’m not just talking about bit players like Jerry Springer, George R.R. Martin(?!) and Michele Bachmann(?!?!?) I’ve said it before and I’ll say it again: Ziering tries harder at Sharknado than I’ve ever seen anyone try at anything. His full commitment to this ridiculousness oddly grounds the entire thing. (To the extent a movie called Sharknado can be grounded.) Reid continues to be an atrocity with every painful line reading, which makes Scerbo’s return as Fin’s primary companion in sharknado hunting especially welcome. Among the newcomers, Muniz acquits himself well by uttering the word “sharkicane” with total conviction, while Hasselhoff’s participation feels preordained. (It’s a minor miracle he hadn’t gotten in on the action before.)

This Blu-ray is billed as the “Exclusive Sharktacular Edition.” The differences are relatively minor (Martin gets a line of dialogue this time, a few brief bonus cameos), and the cut is not significantly different from the version that aired on SyFy earlier this year.

Sharknado 3: Oh Hell No! is presented in its original aspect ratio of 1.78:1. The 1080p image is arrived at with an AVC MPEG-4 codec at an average of 19 mbps. As with The Second One, the bitrate here varies wildly, which isn’t all that surprising given that the image frequently alternates from on-location shots in Orlando and Washington, D.C. to visual effects that seem to have been created using Microsoft Paint. The palette is once again appropriately gray — particularly during the opening sequence in D.C. — but the image does momentarily brighten up during some early sunny scenes at Universal Studios. Those clear, vibrant Orlando scenes give the best indication of what this HD disc from Cinedigm can really do. This film also offers reasonable deep black levels once the action shifts to space. Overall, this is a slightly stronger visual presentation than its predecessor; there are fewer instances of softness and other blemishes.

The DTS-HD Master Audio 5.1 track is honestly a bit of a letdown. Instead of fully immersing us in the whooshing winds and growling sharks of the titular sharknado, the rear speakers are constantly preoccupied with pumping out the generic thriller score by Chris Cano and Chris Ridenhour. Even the crowd noises at Universal Studios are muted by the ever-present music. The good news is the subs do come to life impressively for the film’s thunderstorm effects, and the sounds of sharks munching on shameless celebrities produce an impactful *squish*.

Lights, Camera, Sharks — The Making of Sharknado 3: (12:43) Turns out the people behind this franchise are as surprised about its popularity as we are. There is some on-set footage here to go along with cast and crew interviews. The most interesting bit comes Ziering, who sounds a little frazzled as he points out that the scripts for the films are constantly changing to make way for new cameos. (Hold the phone…these movies have scripts?!)

Feeding Frenzy — Exclusive Look at the Sharknado Documentary: (1:45) A sneak peek at a forthcoming documentary — due next year — that examines the Sharknado phenomenon. The clip here covers how producers had to temporary change the name of the first movie to “Dark Skies” to convince actors to sign on.

Growing Pains — The Evolution of Sharknado VFX: (4:41) It’s easy to make fun of the franchise’s visual effects, but this is a clear-eyed look at the artists who create them. Again, no one here thinks they’re creating something exquisite — or that the VFX are Industrial Light & Magic-quality — and the artists speak candidly about the accelerated production schedule. We also learn the effects in Oh Hell No! are the most sophisticated yet. (Stop laughing, it’s true.) Most importantly, these guys seem genuinely giddy that their job is to come up with outrageous ways to bump off D-list celebs.

Gag Reel: (4:47) This collection of flubbed lines is highlighted by outtakes of Cuban vulgarly trying to make Ziering crack up during a scene at the White House.

Bite Marks — The Famous Faces of Sharknado 3: (5:16) Casting director Gerald Webb talks about how his phone calls started getting returned once the first film took off. We also hear from ESPN personality Michelle Beadle — who actively campaigned to be in this movie — along with a handful of the other stars(?) who pop up in Oh Hell No!

Archie vs. Sharknado: (5:46) The Sharknado phenomenon has transcended television and crossed over into comics. Ferrante and a few other crew members give us the lowdown on a one-off comic book crossover with Archie. We also get extensive glimpses of the comic itself.

Making of the Soundtrack: (8:26) Ferrante and Robbie Rist moonlight as a band called Quint. (Yes, that’s a reference to Robert Shaw’s character in Jaws.) We catch up with them in the studio and they discuss the making of a couple of the movie’s songs. (Fun fact: Rist also played the infamous Cousin Oliver on The Brady Bunch.)

Shark Chum — Extended Scenes: (14:25) Ferrante pops up to introduce longer versions of the George R.R. Martin, Michele Bachmann, and Kathie Lee and Hoda cameos. There are also a few other expendable extended scenes.

The Asylum VFX Before and After: (2:10) A side-by-side sizzle reel that allows us to compare a lot of greenscreened/animatic material to the finished product.

Audio Commentary: Ferrante, writer Thunder Levin, and three of the film’s VFX artists sit down for this informative, entertaining chat. Ferrante is the genial host who drives the conversation, and he’s filled with funny behind-the-scenes stories about the loose production. There are also plenty of anecdotes related to the movie’s many cameos.

Say what you will about the film itself, the bonus material on this Blu-ray pretty much tells you everything you’d ever want to know about Sharknado 3.

“Where do you go from here?”

As I alluded to before, Sharknado 3 goes to space, so I’m not really sure what ridiculousness Ferrante (who has directed all three movies) and his team can possibly conjure for a Part 4. And make no mistake: there will be a Part 4.

When Oh Hell No! aired on SyFy, it ended with a cliffhanger that left a character’s fate in the hands of the viewing audience. (I’m personally hoping this person doesn’t survive.) The Blu-ray version doesn’t feature the prompt for the audience to vote, but it concludes on the same ambiguous note. The answer will be revealed when Part 4 premieres, presumably next year. Can you really believe there are going to be at least four of these things? “Oh hell no!”