Posted in: Disc Reviews by Archive Authors on October 18th, 2015 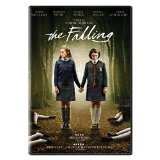 Our story follows a sexually confused young girl, Lydia, who is going to an all-girls school in Britain. Lidia has a strong relationship with a girl named Abbie, to the point where the girls are rarely seen apart. Abbie discovers that she is pregnant and starts fainting at random points throughout her day. After the two girls act out in class they both wind up in detention, but the girls must be excused because Lydia is not feeling well. Lydia dies on their way out of detention. The school starts mourning the loss of Lydia, but everyone begins worrying when Abbie starts having fainting spells like Lydia did before she died.

I absolutely loved this movie, and what is weird for me is that the first thing I notice isn’t the writing or the acting; the first thing I notice is the music and how beautiful this movie looks. This is one of the few movies I would deem worthy of owning the soundtrack for. All of the music has this kind of trance-like quality; it’s a lot of acoustic and beautiful vocals. The music blends perfectly with camera shots that belong in an art museum. Since this movie is very “Arthouse,” I am treated to a lot of shots of nature. Characters will look out of a window, and I will be treated to a beautiful capture of a lake and tree setting. When I am listening to a vocal/acoustic song while looking at shots of nature, or people in a natural setting, a sense of Zen comes over me.

The story in this is beautiful; it requires that you pay a lot of attention to what is going on at all times, but it still remains a great story. It basically tries to teach a lesson about the sexual confusion of a girl in an all-girl school, who has an absentee mother (absentee in mind, not physically absent). You get treated to a lot of scenes where Lydia is straight up breaking things or making a mess, and her mother does nothing to stop her. I love that Abbie’s pregnancy is constantly referred to as “the situation”, and it brings up a short conversation about abortion. I loved the dialog; in most of this movie where the children are talking to one another they seem like young adults. One scene in particular is when they are speaking about how the adults are treating their fainting spells. I love that it comments on only a small spark being needed to start a wildfire, as in when Lydia starts fainting, she gets the entire school to start fainting. The ending was great; I won’t give anything away, but let’s say that it ties up a lot of loose ends and leaves me feeling satisfied. The only slight problems I have are from some unexplained things. Abbie has this thing that she does where she touches her cheeks during certain moments, and I never got what that was about.

The last thing I have to comment on is the acting. I didn’t see one case of anyone phoning it in, or playing a scene up too much. Every actor in this movie was present and displayed a certain affection for their craft. This is the first movie that I have seen with Masie Williams away from the Game of Thrones franchise, and she did not disappoint. Every scene where she is misbehaving or getting angry makes me wonder about what her character is really feeling. She lives the subtext in this movie, so much that you can always tell that there is more to what is going on with her then she is letting on. The other standout performance in this was by Greta Scacchi. She plays the strict teacher with a certain caring/angry tone that reminds me of certain school teachers I had growing up. One scene in particular is when the girls stay after class and she is lecturing them; then when the girls leave and Abbie faints, her tone flips and she is concerned.

In the end, this movie was fantastic. There were certain elements that require a lot of attention, so you might want to watch this when you have nothing around to distract you, although the shots in this are so beautiful I don’t see how someone could become distracted.