Posted in: No Huddle by Jeremy Butler on November 2nd, 2015 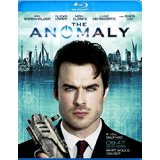 How much can you accomplish in less than ten minutes? In the case of Noel Clarke, you can prevent a global domination plot. OK, to be fair to the rest of civilization, it wasn’t just one ten-minute period, but a series of ten-minute periods. All things being equal, still extremely impressive, no? Noel Clarke is Ryan Dunn, a former soldier who finds that his consciousness is taken over by another, and he only regains control during a system reboot, as it were. In these brief moments of control, he learns of the plot that his operator (as it were) is putting into motion and does what he can to prevent it. However, this brings us back to the original question: how much can one really accomplish in a ten-minute period?

The film has a good opening as the audience is introduced to Ryan (Noel Clarke), who is just as new to what is happening as the rest of us. It’s always good to be on common ground with the protagonist. He wakes up in the back of a van with a young boy who has been abducted. Like any decent human being, he attempts to help the boy. Unfortunately for him, his counterpart is not a decent human being. As mentioned above, Ryan only has partial control during very short windows of time. During each “reboot”, he learns more about what his counterpart is up to in his absence, which includes a plot with global implications. Every time he wakes up, he finds himself in the company of a mysterious stranger (Ian Somerhalder), who is aiding in the plot.

Much the film deals with Ryan attempting to overcome obstacles that are put in place to prevent his interference. In that regard, I was highly impressed with Clarke as an actor. He played a very balanced character in an otherwise out-of-control circumstance. He also showed great adaptability to whatever situation was placed in front of him, especially when his opponents attempt a technique to mitigate his interference in their plans. It was a simple tactic, but there was a certain eloquence to it in my opinion. Somerhalder was impressive as well, very expressive. The great thing about Somerhalder is he doesn’t require a lot of dialog to be expressive; his eyes are what do most of the conveying. For The Anomaly, he is the dutiful soldier and primary antagonist, and though his character is not particularly likeable, it is hard to hate him.

The story, though difficult to follow in the technical aspect, has a good pace to it and kept my interest. Certain technical details should have possibly been addressed a bit earlier than they were. The cause of the reboots was a question I had early on, and the reveal came a bit late; however, in the long run it’s better late than not at all.

All and all this was a great breaking-ground start for Noel Clarke. Enough of a compelling story to keep my attention as well as top-notch action sequences with the exception of the soundtrack at times. A worthwhile experience in my opinion, if you are interested in films of a scientific nature.

Jeremy Butler is a film school graduate of the International Academy of Design and Technology. He is been writing for Upcomingdiscs since 2012; however, movies have played a big part of his life for much longer. Favorite genres include horror, science fiction/fantasy, and comedy. Favorite movies are V for Vendetta, Boondocks Saints, Kiss Kiss Bang Bang, and The Godfather.
Max (Blu-ray) Tiger House (Blu-ray)