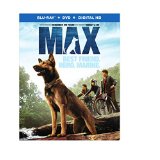 “Dogs have been used by the military since World War I. Over 3000 dogs have served in Iraq and Afghanistan. 26 dogs and 25 handlers have been killed in the service of their country since 2003. This story is dedicated to their memory.”

Baby here. Usually this is where I tell you that I’m the Shepherd/Chow mix who runs security here at Upcomingdiscs. Looks like I really did make that part up. No, I’m still in charge of security. Just ask AJ from Fed Ex. It’s the Shepherd/Chow part. I took a test the other day and Gino didn’t give me any time to bone up on it. OK, he did give me a bone, but it was all about something called a DNA test. I don’t know what that spells, but it turns out that I’m also something called an Alaskan Malamute. Now, Gino’s been asking me to go mute for years. Now I finally understand what that means. So while it looks like I didn’t know who I really was, I do know something about the latest dog film Max. You see, Max is a hero, kinda like me. And just when I finally get to review a dog movie about a fellow German Shepherd, I find out about this Malamute thing. OK, I did make that last part up. Max is something called a Belgian Malinois but looks a lot like a German Shepherd, and that spells B A B Y.   Looks like I just can’t win. But what about Max?

Kyle (Amel) is fighting in the Middle East. His partner is a dog named Max. You see, Max helps to protect those humans over there. When Max wants them to stop, it’s because someone planted a bomb, and Max saves everyone but Kyle, who runs to his rescue. Tyler (Kleintank) should have helped his comrade Kyle, but he didn’t because Kyle caught him doing something really bad. I’m not talkin’ an accident in the living room bad, either. Not that I would know anything about that. Max is taking the loss hard. He’s angry at Tyler and won’t let anyone calm him down.

Back home Kyle’s family are sad to hear that Kyle died. His brother Justin (Wiggins) is not doing very well. He’s bitter and argues with his parents. He’s also selling illegal video game copies that has him mixed up with some bad dudes. At Kyle’s funeral they meet Max, who doesn’t want to say goodbye to his friend. He does appear to like Justin, and it leads to the family taking Max into their home. It’s good for Max and for Justin, who both need a friend, and as a bonus Justine meets a new girl named Carmen (Xitlali). She knows a lot about dogs… and treats. She helps Justin to understand Max better. I think Justin likes her a little better, too, but there’s no real mushy stuff going on here. Together with their friend Chuy (LaQuake) everything is getting better.

That is until Tyler is home from the war and tricks the family into thinking he’s a good guy and it was Max that got Kyle killed. I hate bad guys who blame stuff on the dog. We get blamed for a bunch of stuff anyway. It’s a good thing for Max that the humans figure out that Tyler is lying. It’s a good thing for the humans, too. You see, Justin’s video game guys turn out to be a violent gang, and now Justin’s working with them. The whole family is in danger, and Max is here to save the day.

There’s a pretty good cast of humans here. Gino says he remembers Thomas Hayden Church from a television series called Wings where he played a kind of simple-minded mechanic. Yeah, that’s who I want fixing my airplane to a bad guy who fights Spider-Man. Seems like this guy can play a lot of things. Here he plays the father who was also injured in the military. He has to go from anger to understanding. He also is the one who first trusts Justin, so his character gets to change a lot, and I thought he did a pretty good job. Anyone know where I can send him some treats?

The kids are OK for what Gino calls a low-budget film. The important thing was that they did very well when they were together. They felt like friends. Gino calls it chemistry. And Kyle was played by Robbie Amel. Heck, he’s the cousin of The Green Arrow. Gino says he’s going to play an FBI agent in the new X-Files shows. I don’t have to tell you this human’s pretty good. I’d send him some treats, but he might beat me up if they’re not the kind he likes.

Max does a good job of reminding humans that dogs are out there risking their lives just like they are. It’s the kind of movie where they help each other. Of course, there’s some drama, but it isn’t the usual funny stuff where the bad guys don’t even know how to put their pants on without falling down. Why do you guys wear those things anyway? Heck, I even heard two humans fighting over who was going to wear them. Those must have been some cool pants. It’s the kind of movie you can watch with your pups. They might get a little sad because Kyle died, and you might end up having to explain war to them. I kind of understand already, because I know that I have to protect my family against anything.

Max is presented in its original aspect ratio of 2.40. The 1080p image is arrived at with an AVC MPEG-4 codec at a pretty constant 30 mbps. This one isn’t going to win any of those treats for being a great image presentation. But it looks pretty good from a natural perspective, and that’s just what dogs like best. It’s got enough detail that I can almost smell those treats.

The DTS-HD Master Audio 5.1 lets us hear what the people are saying. It’s not like there’s a lot of things blowing up, except in the beginning when Max and Kyle are in the war. OK, that explosion makes the room shake a little, but I wasn’t scared at all. Every now and then I heard something going on behind me, and it made me look, but there wasn’t anything there.

Working With Max: (4:49) This shows you all of the different dogs that played Max depending on what he had to do. They sure get a lot of treats and attention. I wonder if I can be a star just like these guys?

Hero Dogs – A Journey: (7:42) This one looks at the way these hero dogs are trained and all of the things they can do. Bet I could do that stuff. What do you guys think?

This is no Disney cute movie about talking dogs or kiddie slapstick. This movie actually talks about some serious stuff and shows how dogs and people might be more alike. We both like to have friends and are sad when they are gone. I know about that story. My best friend died in a motorcycle accident when I was only eight years old. His name was Nolan, and we had lots of fun together. I miss him, but if it weren’t for Gino and Ellen here at Upcomingdiscs, who knows what would have happened. But they gave me a good home with lots of treats, and now I protect them so nothing happens to them. I even get to write reviews now. And that spells F A M I L Y.  It just goes to show you that it isn’t always true that “you can’t get a reward if you haven’t done anything to deserve it”.

Baby was a German Shepherd/Chow mix canine reviewer at Upcomingdiscs from 2010 until 2016. She was also chief of security here with her Baby On Board Security side-business. And that spells F A N G S.
“31 Nights Of Terror” The Exorcism of Molly Hartley (Blu-ray) The Anomaly (Blu-ray)