Posted in: News and Opinions by Gino Sassani on November 12th, 2015 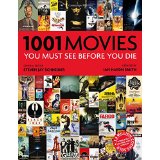 At the turn of the millennium a decade and a half ago, lists were pretty popular. It didn’t matter if you were into the world of sports or movies, everybody was looking for the all-time best of everything. The American Film Institute got into the trend by releasing top-100 lists. Heroes, villains and memorable quotes all got the treatment. We all argued about the “classics” we felt were unfairly slighted and the “idiotic” choices that did make the lists. If only the lists were so much larger. Then everyone’s favorites would be included and we could all finally find a list we could agree on. But, what number would that be? 100 was too small. A million was just too large. What number might be just right? 1001?

The millennium passed and the manic number of lists subsided. 2007 came and we all learned what a Bucket List was. We all started thinking about those wonderful things we felt we simply must experience before we kick that figurative bucket. If you’re reading these pages, you likely included a list of films that you had to see before you die. It seems that the folks at Barron’s Publishing have attempted to answer that question for us with their encyclopedic book: 1001 Movies You Must See Before You Die.

Now, usually you turn to these pages to get the scoop on the latest DVD and Blu-rays coming down the line. It’s very rare that we take the time to talk about books. But I really believe that this one is a notable exception. Yes, there are more than 1001 books out there on movies and entertainment. What makes this one so special? I’m glad you asked.

The version that I had the distinct pleasure of reading was the recent fifth edition of the book that was first published in 2003. Obviously a lot of films have been made since then, and each edition attempts to keep us updated with the latest “must see” films to have hit our cinemas. Of course, with a name like that the number is somewhat set in stone. That means for each new entry into the club somebody’s getting kicked to the curb. For example: This volume couldn’t maintain its credibility and not include such recent films as Under The Skin, Whiplash, Birdman or even Guardians Of The Galaxy. I agree with every one of these additions. You’ll find we gave each of these films near perfect scores in our own reviews. Kicked to the curb this edition is the still-recent Nebraska and American Hustle. I don’t agree with those deletions at all. The others like A Touch Of Sin and The Tree Of Life likely won’t be missed. Of course, that’s one man’s opinion.

With just these selections I’m sure the debates are well on their way to getting started. Imagine taking the millions of films made and coming up with 1001. It’s a task I don’t envy the book’s editors one little bit.

The first thing you need to know is that the book isn’t laying the claim that these are the very best films ever made. It merely includes movies that for some reason or another demand to be experienced at least once in your life. Many are included because of the influence they have had on those that came after. And while these films might seem primitive by modern standards, we wouldn’t have the modern standards without them. Others are included because of some groundbreaking milestone the film measures in the industry. Many are included because of how much they have invaded our pop culture. The movies span all genres, all nations, and all subjects. Each capsule gives us a short description of the film and a brief presentation of the reasons for its inclusion here. The capsules range from very short paragraphs to two-page spreads. There are 80+ contributors, so the writing styles vary considerably. The book includes hundreds of wonderful stills from these films and is one of the most informative books I’ve encountered in the last decade.

I’m very pleased that there appears to be no discrimination over genre or country of origin. The collection of films here is appropriate for any true connoisseur of the medium. For the most part, the writers are knowledgeable about their subject and provide just enough about each film to whet our appetite, which is the true purpose of the volume, not that I need much pushing to watch more movies. There are rare gems here that will have me searching the rare video lists out there to check out. Unfortunately, they did not give consideration to availability, and while I would never condone resorting to bootleg copies, I’m afraid that’s the only way you’ll ever see some of these titles. It’s likely impossible to see all of these movies, but it will be fun trying. That’s what makes this book so enjoyable, if a bit of a tease.

The book is an excellent value. It’s heavy and substantial, clocking in at nearly 1000 pages. For each movie you’ll get vital cast and crew information as well as Oscar nominations. English translations are provided for foreign films. Nearly every film sports at least one photograph.

There are flaws. Last edition I was disappointed when the preface erroneously credited the “bigger boat” quote from Jaws to the Hooper character when we all know it was Brody who said it. It was quite a glaring error and one I’m surprised hadn’t been caught and corrected. Of course, it’s gone with no accreditation to yours truly for pointing out the error. I won’t hold that against them. There were other more minor errors which do threaten the book’s credibility. There are also notable trends that I’m not sure are justified. It seems they haven’t seen a Hitchcock movie they didn’t think belonged in the book. I tend to agree that he wasn’t called The Master for nothing. But when you are trying to represent experiences rather than necessarily the best, cutting a few of his titles here would have allowed the book to stretch its reach more. Would you believe that no Abbott And Costello films are included? Certainly, one should experience at least one of these films to gain a complete movie diet. I’d vote for Abbott And Costello Meet Frankenstein, which is absolutely a groundbreaking film and one that has influenced more than a few that followed. It’s the only MIA film that I would go to the mat for. Of course, the arguments about what should or should not be included are part of the fun. Obviously, I disagree with many choices, but it generates conversation about these films, and that’s a very good thing. The last flaw I found was that many of the blurbs contain crucial spoilers. This is not the book for such important giveaways. If the idea is to encourage we see the film, why would you spoil the twists for us here?

Flaws aside, I really do think this is one of those books that belongs on every serious videophile’s reference shelf, and I know that it will enhance mine for years to come. Consider it required reading from this course on filmography. There are genre-specific titles that I hope to be able to share with you in the future. The new edition editor is Ian Haydn Smith, and he’s literally “throwing down the gauntlet for you to choose your own movies to die for”.

Gino Sassani is a member of the Southeastern Film Critic's Association (SEFCA). He is a film and television critic based in Tampa, Florida. He's also the Senior Editor here at Upcomingdiscs. Gino started reviewing films in the early 1990's as a segment of his local television show Focus. He's an award-winning recording artist for Omega Records. Gino is currently working on his 8th album Merchants & Mercenaries. Gino took over Upcomingdiscs Dec 1, 2008. He works out of a home theater he calls The Reel World. Favorite films: The Godfather, The Godfather Part II, The Body Snatcher (Val Lewton film with Karloff and Lugosi, not the pod people film), Unforgiven, Gladiator, The Lion King, Jaws, Son Of Frankenstein, The Good, The Bad And The Ugly, and Monsters, Inc.
Mr. Holmes (Blu-ray) Terminator: Genisys (Blu-ray 3D)