Posted in: Disc Reviews by Gino Sassani on November 11th, 2015 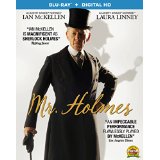 I have been a fan of Sherlock Holmes since I was a kid. Mixed amidst those Universal horror films I watched with my Pop on weekend chiller shows was an occasional Universal Holmes film with Basil Rathbone as the master of deduction. Soon followed the Doyle books, and a new world was opened for me forever. Since those days we have seen every kind of incarnation of the character possible, or so I thought. I’ve seen Holmes as a child in Spielberg’s Young Sherlock Holmes. There have been several comedies and even a musical or two. Robert Downey Jr. has turned him into an action hero, and Benedict Cumberbatch has brought him into the modern world. I even remember Larry Hackman’s television version of a motorcycle cop who has a head injury and believes he’s the famous detective, gaining the requisite deductive skills in the process. It was called The Return Of The World’s Greatest Detective. Star Trek fans reveled in Data’s immersion in the detective’s world, even bringing back his infamous nemesis as one of The Next Generation’s more sympathetic bad guys. But in all of these incarnations I have never seen anything as truly remarkable as Mr. Holmes. It is most decidedly something different entirely.

It’s hard to imagine that one could drop nearly all of the detective’s iconic features and be at all successful. I mean, really. Can you have a Holmes story without the word “elementary”? Thus bringing up yet another modern version of the man. What about the pipe and deerstalker cap? What if our dear Watson were reduced to a mere 2-3 minutes of film time without ever hearing his voice or seeing his face? What is it that really makes the man who he is to generations of fans? Ah, it’s his mind, you might say. What if we even took that away…to a certain extent. Would you…could you still have a Sherlock Holmes story? Add Ian McKellen to the mix and a brilliant screenplay based on the novel A Slight Trick Of The Mind, both written by Mitch Cullin, and the answer is a resounding yes. Yes, you can. Yes, they did.

The story takes place in 1947, and it has been 30 years since Sherlock Holmes last took up a case. There was something about that case that drove him from the profession and away from the world. He’s 93 now and suffering from what we today would call Alzheimer’s disease. He’s retired to keeping bees, attended to by a housekeeper (Linney) and her young son Roger (Parker). He knows something went wrong with that case, but he can’t quite remember what it was. He only knows it must have been something horrible and that his companion John Watson must have gotten it wrong when he wrote of it being a success.

He has tried various things to restore his memory, from royal jelly to prickly ash. The later caused him to be lured to Japan by a man promising help, but only offering yet another mystery his addled mind can no longer solve. He wants to write the story of the final case as it really happened and along the way wipe away many of the fictions Watson used to embellish their adventures and Holmes’ fame. But it isn’t the supplements that finally enable him to piece the story and his memories together. It’s Roger, who idolizes Holmes and sees in him the man he used to be. And through Roger’s prodding, we begin to see that Sherlock Holmes is still in there somewhere. Flashes of brilliance and deductive reasoning remain.

As brilliant as the story might be, Ian McKellen brings life to this role like no other he has delivered before. This is easily my early favorite Best Actor performance for 2015. McKellen has the unenviable task of portraying a man known for his mental prowess at a time it is failing him. It’s sad to see anyone suffer from this particular affliction. I’ve seen it up close, and it’s heartbreaking. Imagine how much more heartbreaking it would be for a man who is most identified by his mind. Well… you don’t need to. McKellen has done it for you, and the results are an emotional rollercoaster you will not want to end. It’s accomplished with the most subtle of nuance possible. McKellen need only offer an agonizing look of frustration for a second to get the point across effectively. Perhaps it really is elementary after all. In addition, McKellen plays Holmes in flashbacks with his mind still fully intact. Here he bears an uncanny resemblance to the late and very great Peter Cushing, who also played the role in the iconic Hounds Of The Baskervilles (1959). Both in appearance and his approach to the character the resemblance is rather haunting. His performance alone is worth the price of admission.

The supporting cast is also quite good. Laura Linney provides the stark reality of the film as the frustrated housekeeper who finds herself overworked and over her head. Add to those feelings one of protection for a son who has grown quite attached to the ailing figure. Milo Parker also hits it out of the park with his portrayal of Roger. There’s instant chemistry between these two actors, and the young actor appears to have a fine feel for his costar in a manner far beyond his years. It’s no wonder. I’ve always believed that great acting brings up the quality of good actors. That has never been more evident than it is here.

Finally, the film’s narrative style is so easy to follow even as it jumps around in time. I often find that kind of a plot device lazy and a bit distracting. That’s never the case here. The puzzle pieces fit together naturally, all in their own good time. The style reflects the unorganized order of Holmes’ memories, but without appearing haphazard and contrived. Director Bill Condon is well aware he is not in need of narrative tricks or complicated devices to keep the audience’s attention. It must have been clear from early on that attention wasn’t going to be a problem. He knows he has a story that will tell itself if he just stays out of the way. Trust. Trust in the audience. Trust in the material and cast. It’s an all too rare commodity in filmmaking today. I’m very happy to see it’s not lost completely. The locations are perfectly suited to tell this story. The coastline vistas are beautiful.

Mr. Holmes is presented in its original aspect ratio of 2.35:1. The 1080p image is arrived at with an AVC MPEG-4 codec at an average 35-40 mbps. The high definition image presentation retains everything I remember from the theatrical presentation. The establishing shots are quite beautiful. The train traveling through the country-side or the white sand bluffs of the coast, they all deliver wonderfully vivid moments. The textures and details bring to life the world and person of Holmes in every way possible. Black levels are perfect. The image does everything it can to accent this heartwarming story.

The DTS-HD Master Audio 5.1 is quite intimate and close. Dialog dominates everything as if it were happening right in front of you, and of course it is. The score is one of those subtle things that you hardly notice until it does something quite delightful. There’s just the subtle use of subs to fill out the slight bottom of things like Holmes’ voice. The surrounds aren’t aggressive but then again that would only intrude on the personal nature of the audio presentation, wouldn’t it?

My only disappointment is found in the two short 2 minute features that serve little more than promotional pieces.

I know that Sherlock Holmes was/is a fictional character. It seems silly that I feel as if I’ve just seen a bio-picture on an actual historical man. There’s nothing of the fantastic here, and Sherlock Holmes has never been more human. Mr. Holmes makes you believe. There isn’t much more that any film can do. I’ve seen the movie twice now. After attending a press screening I paid to see it again and share it with my wife for her birthday. I do that rarely, these days (pay for movies, that is). I already want to see it again. I could have never imagined that anyone could deliver a new perspective on Sherlock Holmes, and I have a very good imagination. Not as good, it seems, as the team on Mr. Holmes. This is as perfect a movie as I’ve seen in some time. Do I still believe that no one going forward could put a unique spin on Holmes? It seems whatever direction the character goes in the future this performance will have a lasting influence. “Always leaves a trace”.

Gino Sassani is a member of the Southeastern Film Critic's Association (SEFCA). He is a film and television critic based in Tampa, Florida. He's also the Senior Editor here at Upcomingdiscs. Gino started reviewing films in the early 1990's as a segment of his local television show Focus. He's an award-winning recording artist for Omega Records. Gino is currently working on his 8th album Merchants & Mercenaries. Gino took over Upcomingdiscs Dec 1, 2008. He works out of a home theater he calls The Reel World. Favorite films: The Godfather, The Godfather Part II, The Body Snatcher (Val Lewton film with Karloff and Lugosi, not the pod people film), Unforgiven, Gladiator, The Lion King, Jaws, Son Of Frankenstein, The Good, The Bad And The Ugly, and Monsters, Inc.
The End of the Tour (Blu-ray) 1001 Movies You Must See Before You Die (6th Edition)