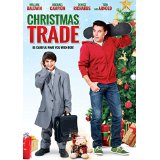 I am not going to lie: I am a complete sucker for the “life swap” genre of film. Whether it is Freaky Friday, The Parent Trap and their remakes, or the fantastic Face/Off. These films always are entertaining for me, as I take great joy watching actors and actresses overcome the challenge of acting out the minute characteristics of the other actor (not just the character). Christmas Trade is no different; the two actors do a good job of keeping their portrayals believable. However, it misses several opportunities to be my second-favorite “life swap” film to date (I don’t think anyone can top Cage and Travolta in Face/Off).

Robbie Taylor (Michael Campion) and his father, Mitch (William Baldwin), are each struggling with the loss of the mother figure. Mitch is doing his best to move away from the tragedy by becoming romantically involved with Chloe (Denise Richards) and keeping himself busy with work as a lawyer. As a result, Robbie is unable to interact with his ideal father figure on a regular basis, causing him to mildly act out at school. One day a mysterious package containing a stuffed animal arrives at their doorstep and magically switches their lives.

The primary issue with this movie is its length. Clocking in at one hundred minutes, there are a couple scenes that could have just been omitted for time and the film would have been stronger. As I said before, I enjoyed watching Baldwin and Campion act out each other’s roles, especially Baldwin acting like a child for the majority of the film. While this is the first film I have seen Michael Campion in, it is no surprise to me that he landed a lead role in the Full House spinoff, Fuller House, coming to Netflix in 2016. So, while the acting was really enjoyable, it is the “filler” scenes that really hurt the film’s overall pace.

Recalling my original statement, Christmas Trade became very close to being one of my favorite “life swap” comedies. The film is very self-aware, making sure to reference Freaky Friday within its dialog as an attempt to explain the circumstances. Where I appreciate the meta-critique, it paved the way for a rather brilliant concept later in the film, which ended up being a letdown. Basically, the father-son duo calls repairman Gus (Tom Arnold) to fix the bear. He eventually does fix the toy, but leaves the pair with these words of wisdom: “Don’t worry, these things always have a way of working themselves out”. I love this exchange in dialog, as I take the term “things” to mean “all ‘life swap’ comedy plot lines”, as if to wink at the audience. Had this exchange happened closer to the beginning of the film, I believe they could have worked in a more creative plot development involving the Meta cinematic aspect, rather than just sort of poking fun at it towards the end.

All other events that transpire within the film are just typical shenanigans within the “life swap” genre. The “son” has to try to be a lawyer at Dad’s job, and “Dad” has to go be a kid at school, so on and so forth. It isn’t what I would call a “Christmas classic”, but it definitely is a film I could put on to play in the background to bring about the Christmas mood during a party or decorating the house. It may be a bit long, but it certainly sparked a little Christmas spirit within me. If you are looking for a fun family film for the holidays, William Baldwin’s performance is sure to entertain viewers of all ages.

Breaking Through Getting On: The Complete Second Season (Blu-ray)