Posted in: No Huddle by Jeremy Butler on December 4th, 2015 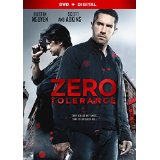 This may well be the first film that I’ve seen where the police were actively aiding someone seeking revenge for the death of a loved one. Don’t get me wrong, it is not a foreign concept; however, in my experience police participation is usually comes about towards the conclusion of the story. In the case of Zero Tolerance, an officer signs on to help from the very beginning knowing full well how things are going to end. The fresh perspective on the situation was enjoyable; however, it did not fully compensate for how the story unraveled. Peter, a twenty-year veteran police officer is called to the scene of a homicide, a woman found naked and bound in a body of water.  A sex crimes detective, Peter is hardened against such crimes; such is a prerequisite to survive. His exterior is cracked when he recognizes the victim as the daughter of an old friend.  Knowing the repercussions of what is likely to happen when the father finds out, Peter seeks out Johnny to deliver the news personally.

In an effort to get ahead of the situation, Peter offers to allow Johnny to be a part of the investigation in hopes of preventing unnecessary bloodshed. With the understanding that Johnny will exact revenge on those responsible for his daughter’s death, Johnny agrees to the terms. However, the situation quickly spirals out of Peter’s control as Johnny is not a restrained in delivering justice as Peter had hoped.

As I mentioned earlier, it had a refreshing perspective; however, the way the story unraveled left something to be desired. Too much of the film was focused on the emotional aspect of the daughter’s death. Granted emotion is an integral and important portion for the story; lead actor Dustin Ngeuyen was not equipped to carry that burden. He performs as a reserved character, but the deeper it comes with the guilt and regret regarding him not being an active part of his daughter’s life, the less emotion is shown on his part. A layman may be able to chalk this up to his character feeling numb in upon learning the kind of activity his kid was involved in. I would have accepted that as a legitimate reasoning; however, it is never voiced, so it remains my own opinion.

In regards to the way the story unfolded, I would have liked to spend more time spent developing the over arc of the conspiracy. The whole time during the pursuit we understand that Angel (Johnny’s daughter) was involved in the sex trade and that she had many clients who apparently were in love with her. We also glean that she was quite savvy in her chosen trade, and motive for her death is very lacking, making the ensuing bloodshed feel unnecessary. I won’t go further into detail on that front.

Also, character involvement, especially when it came to Scott Adkins, was not what I expected. Adkins is someone who I have seen of a lot of in recent years, essentially in direct-to-video format, and he makes an impression with the exception of this time around, mostly due to his sporadic appearances. Honestly, his character could have been played by another and have had the same impact. I wasn’t even sure how his character fit into the story in the beginning.

In conclusion, Zero Tolerance is good if you are just looking for action; however, when you start to probe deeper, you may find yourself with more questions than answers. I know I did, and the film concludes with one big bittersweet question. Here’s a challenge: after watching, list your question in the comment section, and let’s see if you have the same one I do.

Jeremy Butler is a film school graduate of the International Academy of Design and Technology. He is been writing for Upcomingdiscs since 2012; however, movies have played a big part of his life for much longer. Favorite genres include horror, science fiction/fantasy, and comedy. Favorite movies are V for Vendetta, Boondocks Saints, Kiss Kiss Bang Bang, and The Godfather.
Mississippi Grind (Blu-ray) Where Children Play