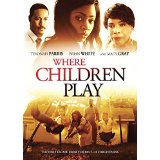 We’ve seen this story before: a family tragedy compels a tortured young soul to return home after a long absence. It’s almost always about a prodigal son who is forced to come to terms with his past so he can heal in the present and get on with his future. (Think Garden State or Elizabethtown.) Where Children Play absolutely deserves credit for inserting a more diverse cast of characters into that familiar template. However, the filmmaking here is too heavy-handed and inert to truly make an impact.

Belle (Teyonah Parris) is a chronic underachiever living in Savannah, where she works a dead-end job and shamelessly mooches off her male roommate/sorta-boyfriend. One day, her aunt Helen (Macy Gray) arrives to inform Belle that her mother Gayle (Edwina Findley) has died. Belle has been estranged from Gayle and the rest of her family for a long time, but she returns to Compton for her mother’s funeral. During the visit, Belle reconnects with Jeremy (Brian White), a do-gooder former athlete who (unlike Belle) made something of himself. More importantly, Belle is horrified to learn that she must now serve as a nurse for her ailing father David (Leon Robinson), since Gayle had been taking care of him.

Where Children Play gradually reveals why Belle was so eager to get as far away from her family as possible…and why she regards her father as a monster. (Those brief flashback scenes have infinitely more life than anything happening in the present.) It’s an impactful revelation that speaks to the hopelessness of being stuck in an abusive relationship. If the film had dedicated all its focus toward Belle’s complicated relationship with both of her parents, the message might’ve been more effective. Instead, the film employs a series of clashing tones and “surprise” revelations that don’t really serve to help the story.

For example, writer/director Leila Djansi inserts an outta-nowhere supernatural element into the film, as Belle is literally haunted by a deadly tragedy from her family’s past. The ghostly interludes here don’t feel earned in the same way they did in something like Eve’s Bayou, which had the mystical qualities of its Louisiana setting hardwired into its DNA. And on a more basic level, the budget and resources here don’t allow for a very convincing poltergeist: with her pancake white makeup, the ghost who haunts Belle — a young girl named Ruby (Kylee Russell) — mostly looks like she’s wearing a mediocre Halloween costume. Of course, budgetary limitations are totally understandable in smaller-scale projects like this one. The bigger problem is the sloppy writing and stilted performances.

Djansi includes some effective little details, like Belle — whose given name is actually Bellissima — wincing every time someone in her family calls her by her birth name. Unfortunately, those little pluses are largely undone by an overly melodramatic screenplay that also gives Belle and Jeremy a shared tragedy (which is brought up and discarded in a matter of minutes), and a final-act revelation involving Aunt Helen. As overwritten as the movie is, the bigger problem is the sluggish, unimaginative direction that often slows the pace of the film and leaves the actors exposed. (Too many of the scenes look like they come out of an overwrought play.)

It’s too bad, because the actors certainly do their best to sell the material. Parris is best known for playing the first (semi)regular black character on Mad Men. Even though her role on that show was frustratingly (and intentionally) marginal, Parris proves herself more than capable as a leading lady. Some of Belle’s outbursts feel a bit out of place, but that’s probably because Parris is more effective in the “quiet storm” moments. Belle is exceedingly irresponsible and should be a hard character to like, but Parris is largely able to maintain our sympathy. Her scenes with White’s Jeremy are confusing mostly due to the fact that Jeremy — Mr. Perfect one minute, conceited and aloof the next — is a problematic, inconsistent character. Singer/actress Gray is always an imposing presence, but her Helen is given little to do here besides berate Belle (at least until the final act). Miranda Bailey turns up as an impossibly kind nurse named Paige, who inspires Belle to take a big step forward in her life.

The tagline for Where Children Play is “the only escape from the past…is forgiveness.” It’s no major spoiler to say that Belle finds a sense of peace by the end credits. The problem is the film doesn’t do a great job of convincing us that Belle effectively resolved her issues with her family. (Especially with her bad dad.) But in the spirit of the film — and largely due to the fact that Where Children Play tried to tell an overly familiar story in a new way — I’m kinda willing to forgive that.