Posted in: Disc Reviews by Jeremy Butler on December 25th, 2015 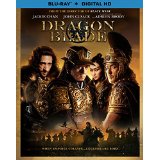 Whenever I read the caption that says the story is inspired by true events, the first thing I wonder is how much of film is actually truth and how much is poetic license. Am I the only one who wonders that? I’m guessing I’m not. In the case of Dragon Blade, I’m thinking that the opening featuring Jackie Chan’s trademark clumsy marital arts style is likely the latter, a tale that falls short of war epic status due to sentimental tendency. Held my attention in the beginning; however, I felt my interest wane in the middle, and by the conclusion it had lost me completely. Sad, because I was excited for this film when I originally heard about it.

Dragon Blade takes place in 50 BC, and Jackie Chan is Huo An, captain of the Silk Road Protection Squad. As the group’s leader, Huo An with a small coalition does his best to keep the peace in Silk Road, a task that is very difficult given the constantly warring factions. Despite these obstacles, Huo An holds steadfast to his code, refusing to resort to violence without attempting peaceful negotiations first. An honorable man, his life is shortly turned upside down when he and his group are accused of smuggling gold and sentenced to a prison camp.

Meanwhile, Roman Legion general Lucius is making his way across the terrain with a limited army and a sickly child. When these two initially meet, there is conflict (although Huo An does everything he can to prevent such) that is quickly resolved once Lucius’s situation is explained. The boy in his care was to be the successor to the Roman Consul until the boy’s elder brother Tiberius (Adrien Brody), who was passed over for the title, staged a coup and seized power after murdering their father. To protect the rightful successor, Lucius and the men loyal to him deserted and fled with the boy. With Tiberius on his way, the two meet form an alliance to overthrow him and prevent his evil reign.

As I mentioned earlier, the film had my attention in the beginning. Watching Jackie Chan’s style evokes fond memories of his glory days during the opening fight sequence. Somewhere around when the group was sentenced to the prison camp is when I begin to feel a shift in my perspective. The film alternates from English to Chinese with subtitles; however, that isn’t what bothered me. There was a bit of confusion in regard to the group’s sentencing; it is not fully explained in my opinion. I think more time needed to be spent of the execution of this plot device, because as it stands it was very immediate, and there was no real substance behind it. No struggle or attempts on Huo An part to plead his case or that of his men. Granted, at this time, it is clear that confrontation is not really the main characters go-to move, but his acceptance of an unfair fate did damage to my opinion of the character. If he had raised more protest, at least for the sake of his men, it would have gone over better in my opinion.

The action sequences were the portion of the film that sparked my interest again. Each sequence was well choreographed and realistic without extensive wire work designed to bring about the impossible. I appreciated the way the fight kept an element of reality to them, displaying the different skill sets of each actor, specifically during the final conclusion between Brody and Chan.

There was a great deal of sentimentality in the film. At first it was endearing; however, over time it became an annoyance. I know that to some that will make me sound like a cold fish, but it was laid on pretty thick in this story. Both Chan and Cusack share multiple tender moments intended to humanize the characters and strengthen their bond; however, given the premise, I expected their bond to be strengthened in battle. Multiple bittersweet moments that culminate in one tragic scene. I will admit that this scene actually did tug on my heartstrings a bit.

Dragon Blade is presented in an aspect ratio of 2.40:1. The 1080p image is arrived at with an AVC MPEG-4 codec at an average of 36 mbps. Overall picture quality is average in my opinion. While the film does possess good clarity throughout its duration, specifically in regards the exterior landscape of Silk Road, the colors are at times appears muted, especially the blood, which is not a prominent feature throughout. Close-up and medium camera shots provide adequate detail; however, the texture does not pop off screen. Black levels are deep with excellent shadow definition, notably in the few night sequences.

The DTS-HD Master Audio 5.1 track provides a realistic albeit not immersive listening experience. Well balanced with very few areas where sounds are exaggerated. Dialog and soundtrack remain in sync without overpowering one another. Dialog remains clear and concise without the need to raise the volume. Much of the sound is generated from the speakers, which dampens the potential for an immersive experience.

Behind the Scenes of Dragon Blade (21:28): Jackie Chan and John Cusack along with writer/director Daniel Lee recap what motivated them to want to be a part of the film. A glimpse into the pre-production and production of the war film.

Extended Interviews with Cast and Crew (56:13): Full interviews with Daniel Lee, Jackie Chan, John Cusack, Adrien Brody, and other members of the crew that were included with the behind-the-scenes feature. Cusack and Brody interview occurred on set of the film, while the other took place at a production junket.

Trailer Gallery: Promotional trailer for the film as well as other Lionsgate films.

Music Video: Two music videos for the film: “Please tell the wind to bring my father home” and “Song of peace.”

Comedic in some areas specifically towards the beginning of the film. The film falls short of war epic status in my opinion. Regardless, there are enough different elements to the story for every person to find something to like. A worthwhile experience for casual night at home; not really a film I would have seen in theaters. Fortunately I didn’t have to. If watched with no expectations, it is likely to be enjoyed.

Jeremy Butler is a film school graduate of the International Academy of Design and Technology. He is been writing for Upcomingdiscs since 2012; however, movies have played a big part of his life for much longer. Favorite genres include horror, science fiction/fantasy, and comedy. Favorite movies are V for Vendetta, Boondocks Saints, Kiss Kiss Bang Bang, and The Godfather.
The Big Short 12 Rounds 3: Lockdown (Blu-ray)